Serena Williams was beaten in straight sets by Belinda Bencic in the second round of the Canadian Open on Wednesday night before saying goodbye to her fans in Toronto.

Bencic dropped just six games in a 6-2 6-4 victory where Williams showed flashes of her best, but no more. The Swiss star stayed composed, refused to let the gravity of the match unsettle her and advances into round three.

Speaking on court after the match, Williams thanked her fans in Canada for their support across the course of her incredible career. 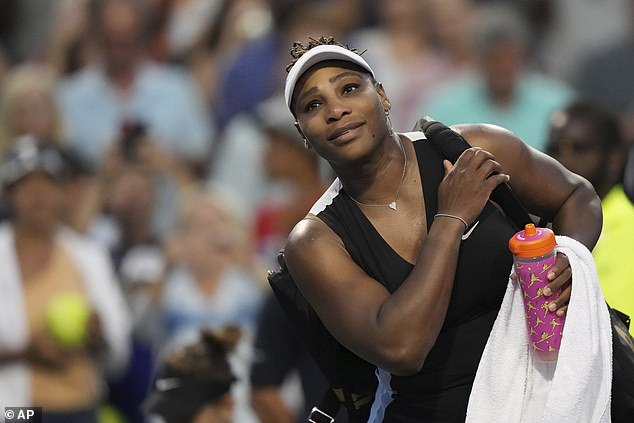 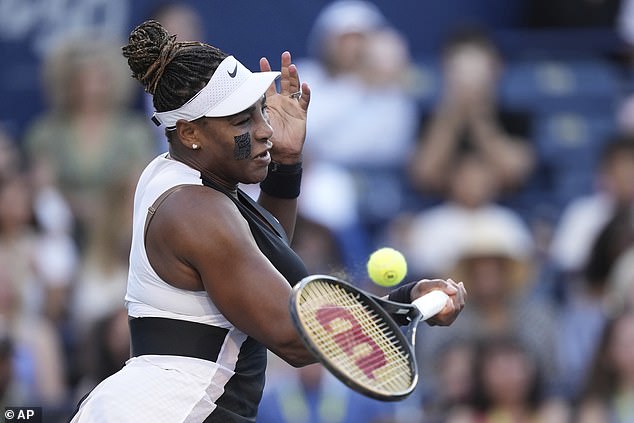 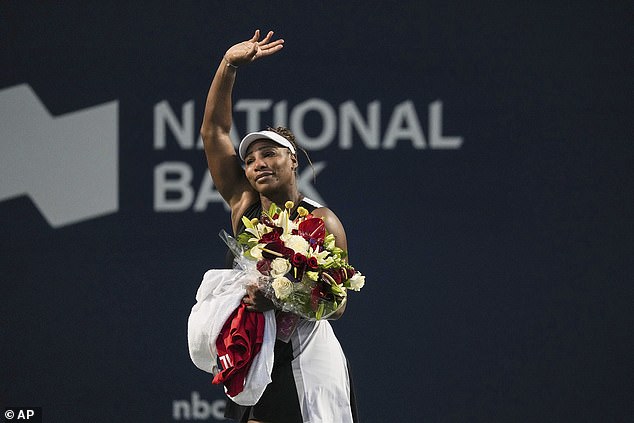 ‘Thank you,’ she said, her voice crackling. ‘It was a lot of emotion, I love playing here and always love paying here.

‘I wish I could have played better but Belinda payed so well today. It has been an interesting 24 hours.’

‘I have always had some amazing times here on and off court and I’ll be coming back as a visitor to the city. I’ve had some crazy matches here.

‘I was really happy to be out here today and thank you for the support. It has been a joy playing in front of you guys all these years.’

Bencic paid tribute to the rival she had just beaten, saying on court: ‘Tonight was really special, it is also overwhelming as it is always an honor to play Serena. Tonight is about her.’

The 40-year-old Williams was handed gifts, including flowers, by tournament organizers before she made her way off the court to huge cheers and applause by her fans.

Williams will likely play the Western and Southern Open which begins on August 15 and then bow out at the US Open, which starts August 29. 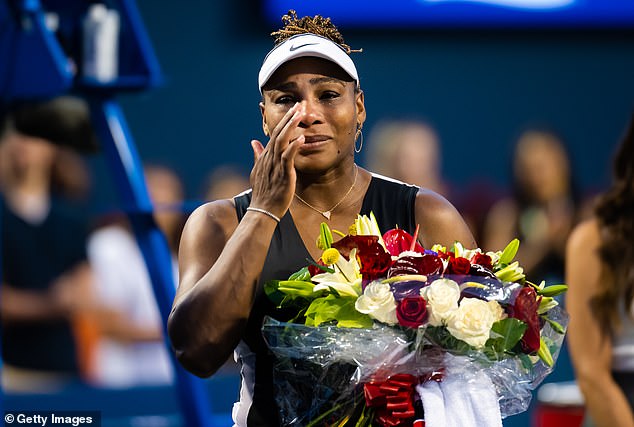 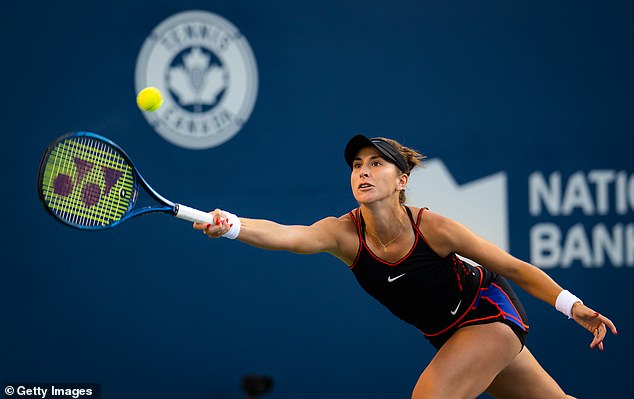 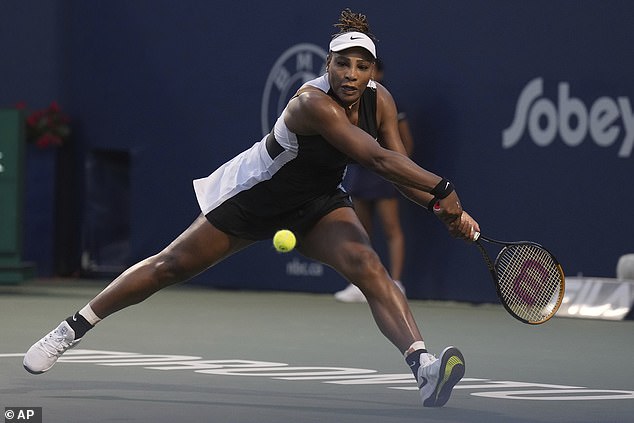 Williams announced her retirement on Monday, in the latest issue of Vogue.

‘I have never liked the word,’ Williams wrote. ‘It doesn’t feel like a modern word to me. I’ve been thinking of this as a transition, but I want to be sensitive about how I use that word, which means something very specific and important to a community of people.

‘Maybe the best word to describe what I’m up to is evolution,’ she continued. ‘I’m here to tell you that I’m evolving away from tennis, toward other things that are important to me.

‘In the last year, Alexis (her husband) and I have been trying to have another child, and we recently got some information from my doctor that put my mind at ease and made me feel that whenever we’re ready, we can add to our family,’ Williams wrote.

‘I definitely don’t want to be pregnant again as an athlete. I need to be two feet into tennis or two feet out.’

‘Tonight was really special, it is also overwhelming as it is always an honor to play Serena. Tonight is about her,’ Bencic says, to huge cheers and applause.

Williams then makes her way over to the mic.

‘Thank you,’ she says. ‘It was a lot of emotion, I love playing here and always love paying here. I wish I could have played better but Belinda payed so well today. it has been an interesting 24hrs.’

She then chokes up speaking to crowd. ‘I have always had some amazing times here on and off court and I’ll be coming back as a visitor to the city. I’ve had some crazy matches here. I was really happy to be out here today and thank you for the support. It has been a joy playing in front of you guys all these years.’

Williams is then handed some gifts from the tournament organizers and makes her way off the court to one last huge reception.

The Williams forehand returns is just too long and Bencic wraps up an impressive victory. The crowd are only cheering one person tonight though and it isn’t today’s winner.

Bencic starts brilliant, with an ace. Williams takes the next point but then her return to the Bencic serve is out, and the Swiss goes 30-15 up. And the next Williams shot is out too – Bencic has two match points…

Williams wins the first point but Bencic answers back with a lovely forehand for 15-15. But there’s a bit of fire from Serena for 30-15 with a smart forehand of her own – she’s not going down without a fight. And a great serve takes her to 40-15! She takes the game when Bencic returns into the net! 5-4!

Bencic starts by serving into the body and takes the first point of her service game. She double faults at 30-0 to give Serena some hope… but that’s all it is. Bencic reels off the next two points and now Serena is serving to stay in the match.

Ooo Williams balloons a forehand out of play at 15-15 – is this the opening for Bencic to take control of the match? Williams then finds the net, this could be bad…

And a double fault from Williams hands her the game. That could be pivotal.

If Bencic is feeling any nerves with Williams playing so well on her own serve, it isn’t really showing. She again seems to slow the pace between serves and takes the game with Williams only winning one point.

Every point Williams wins gets a louder and louder cheer. A huge serve for 40-0 almost causes the crowd to erupt and when Williams eventually holds, the stadium howls in delight. Now, can she get at Bencic’s serve?

Bencic takes her time between serves, perhaps just to try and slow the Williams momentum. And if that is her plan, it’s a good one. She holds to love.

Serena looking solid off her serve though, picking up the Bencic returns well. She holds to love and the crowd go crazy!

Bencic responds well, aided by a bold Serena drop shot that just falls short of the net. Williams needs to get a bit more off the Bencic serve if she’s to stay in the match past this set.

A few cries of ‘Serena we love you’ between her serves and while she takes a little longer to settle after the crowd calls, Williams takes the first game against Bencic. A nice settler for her at the beginning of the second set.

The Swiss caps a brilliant first set with a hold and takes the first set 6-2 against Williams. What has the 40-year-old got in the tank now to stifle her opponent’s momentum?

Benic blew four set points on the way to eventually winning it, Williams blowing her away with a show of power at the net for one point which the crowd loved. But in the end, it’s Bencic who has the first set to her name.

Hmmm – the forehand still looking a little loose for Williams as she fires a shot into the net when you expected here to let fly.

Bencic then responds to a Williams body serve by almost squatting and blocking the ball back over the net. It ends up landing almost like a drop-shot and Williams gets nowhere near it for 30-30!

And she builds on that, some sharp play and fiery forehands give her the advantage on deuce and after targeting the Serena forehand, break again for 5-2.

What was I just saying? The timing has clicked and Serena fights back from 15-40 to deuce with her forehand appearing to click into gear. Bencic holds but something to take confidence there for Williams – by far her best game on the Bencic serve.

She’s shown some good signs in the first five games but off the Bencic serve, her forehand timing looks a little off. 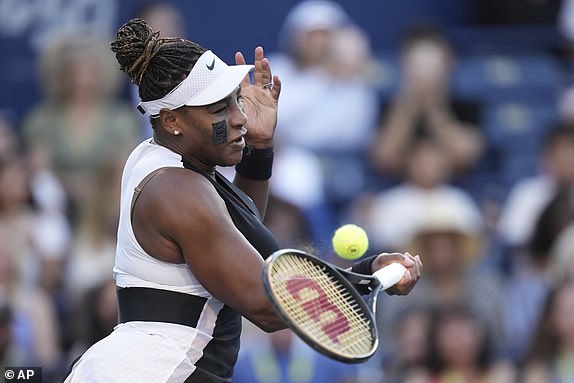 A sloppy, overhit forehand at the net from Williams at 15-15 leaves her looking angry at herself as she trudges back to the baseline. It’s a poor shot from her, whatever the occasion, and Bencic pounces ruthlessly to make two break points for herself.

Williams bludgeons a forehand down the line that Bencic can’t return and then follows it up with a blistering ace, met by loud roars from the crowd. This is more like it!

And then two more powerful serves see her take the game! She needed that!

Oh no. Williams broken without scoring a point. She double faults to hand Bencic the game.

Williams appears to be staying close to the baseline on the Bencic serve. It’s an understandable tactic but it has not worked right away as she loses the first two points.

But then there are signs of life. She takes Bencic to deuce but then dumps a forehand outside of the court for Bencic to take her first hold.

Every point met with loud cheers in Toronto, but Williams is grafting for every one of them. Bencic is showing no signs of being phased by the occasion so far and gets to deuce on the Serena serve.

But Williams holds firm, takes the game and soaks up some more cheers.

A quick warm up is done and Serena will serve first against the No 12 seed to get us going.

She barely flinches as she walks out but it’s a loud welcome from her fans in Toronto as she walks out on court. Williams isn’t one for a victory lap – she’s here to win – but there’s no way that reception won’t have been felt.

You must wonder how it impacts Bencic, as well. Playing Williams is never straightforward, but it’s a different animal today.

Let’s enjoy this while we can, right? Serena Williams is in action in the second round of the Canadian Open. After announcing her plan to retire on Monday, every match she plays now has a greater level of significance.

Today, Belinda Bencic stands between her and the third round. This will be a tough test for Williams, and a good gauge on where she is at in the twilight of her career.