Exciting AFLW prospect Isabel Huntington is breathing a huge sigh of relief after being cleared of a serious knee injury.

The 19-year-old was sent for scans after hurting her knee at training on Saturday with fears that the No. 1 AFL draft pick had suffered a third ACL injury and would miss again.

However the Western Bulldogs sent Huntington for further scans which revealed she had instead suffered a minor knee sprain.

"It’s a massive relief to know that I haven’t injured my ACL again," Huntington said. 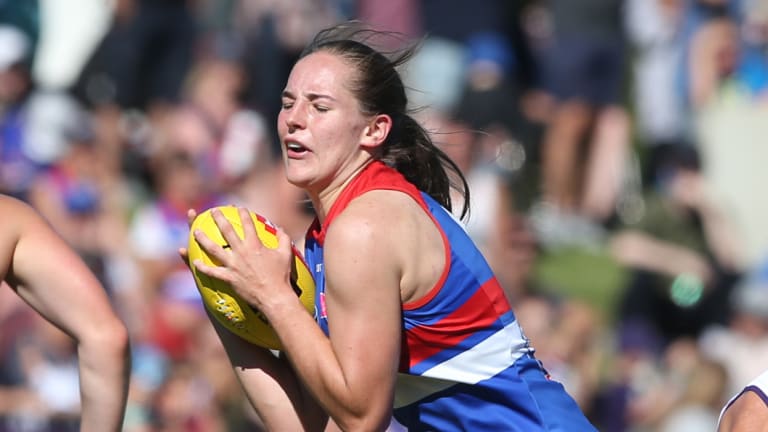 "Going through the emotions was a little overwhelming, so hearing that there was no major damage to my knee was great.

"I’ll be taking a conservative approach to training and working really closely with our strength and conditioning staff to make sure I can get the most out of my pre-season.

"I’m really grateful for the support I’ve received from the club and our supporters over the past few days and I can’t wait to continue my training ahead of next season."

Earlier in the day Collingwood skipper Steph Chiocci had echoed most AFLW supporters thoughts when she wished Huntington well, saying that if the worst fears were realised her absence would be a huge blow for the AFLW competition.

She said players in the competition were putting plenty of work to prepare themselves for the rigours of AFLW conscious of the increased likelihood of females suffering knee injuries.

The serious injuries in the women’s competition has been a major talking point across the first two seasons but is an issue players are doing all they can to prevent, according to Chiocci.

"We put a lot of time and effort into prehab exercises … we put a lot of focus on it and bounce ideas off people in terms of how you can best prepare for training," she said.

"A lot of the time they’re innocuous but there are things you can do to try and prevent them and we certainly focus on that."

The Western Bulldogs are the defending premiers in the AFLW competition.