Tonga may be sweating on Tevita Pangai jnr's availability but ex-captain Sika Manu has no regrets over his international retirement, saying he has left the Mate Ma'a in safe hands.

A loyal servant to Tonga since 2013, ex-Kiwi Test forward Manu believed a bright future lay ahead for the Mate Ma'a despite the threat of State of Origin draining their pack of the likes of Pangai next year. 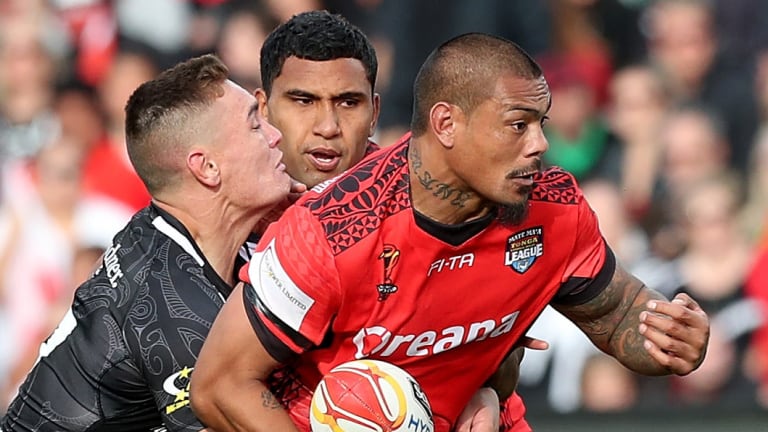 Upward trajectory: Sika Manu can see a bright future ahead for Tonga, despite his absence.Credit:AAP

Explosive Brisbane forward Pangai jnr admitted November's Test loss to Australia in Auckland may have been his last for Tonga after declaring his allegiance to NSW.

It was the last thing Tonga wanted to hear with a busy 2019 ahead after becoming arguably the hottest commodity in international rugby league following their stunning 2017 World Cup semi-final berth.

Tonga will feature in the new Oceania Cup alongside Australia and New Zealand in one group with Samoa, Fiji and Papua New Guinea in the other.

Great Britain will also take on Tonga as part of their 2019 Southern Hemisphere tour that will feature clashes with New Zealand, Samoa, Fiji and PNG.

But UK Super League-based Manu, 31, was confident Tonga still had the depth to step up against league's top-tier nations.

"I definitely think there is potential for Tonga to get even better in the coming years," Manu told Hull Daily Mail.

"One of the reasons I decided to retire was because I'd left them in a good position.

"They have some great leaders and are only going to get stronger.

"I just felt like it was the right time. It gives the young boys a go and Tonga will keep on building."

Hull forward Manu told Tongan teammates after the 34-16 loss to the Kangaroos in New Zealand that he had played his 11th and final Test for the Mate Ma'a but was now still only getting his head around the emotional decision.

While the likes of Jason Taumalolo and Andrew Fifita have ensured Tonga have enjoyed a dramatically increased profile, back-rower Manu was considered the side's heart and soul – as evidenced by teammates' tears that flowed after he confirmed his retirement.

Manu said he could not think of a more fitting way than to draw the curtain on his international career than the Auckland Test which marked Tonga's first clash against Australia.