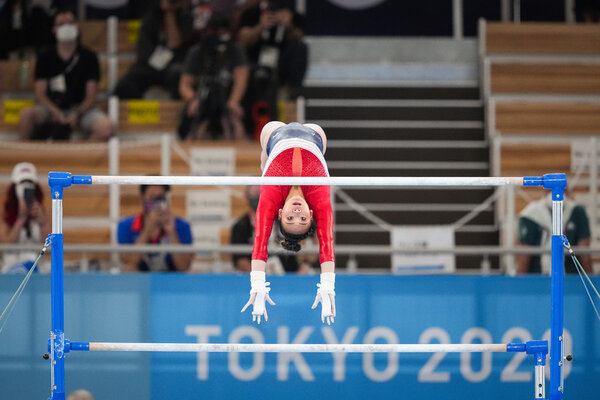 It was expected to be a coronation. A triumphant run to the gold medal for the highest-profile athlete at the Games.

But suddenly the women’s all-around event on Thursday is completely different. With the withdrawal of Simone Biles because of a mental health issue, it is now an actual competition.

There is a strong field of contenders, and their scores and abilities are close. Here are our best guesses for the podium:

Lee placed third in the qualifiers, but she has an ace up her sleeve: Based on the preliminaries, her degree of difficulty will be higher than anyone’s, other than Biles. That gives her a big upside. If she nails her routines, the other gymnasts may not be able to match her no matter how well they do. Lee’s bars routine in particular is a marvel: harder even than the one Biles planned.

As the second-placed qualifier behind Biles, Andrade automatically slips into a favorite’s role, too. Few predicted she would do that well; she has struggled with injuries in her career, and Brazil has never won a women’s Olympics gymnastics medal. But her routines are comparable to the rest of the field’s, and she could be underestimated.

Melnikova was the bronze medal winner at the most recent world championships in 2019. Both she and Urazova were part of the Russian team that knocked off the United States in the team competition after Biles pulled out. The two have similar strengths and weaknesses — Melnikova is a bit stronger on the floor and Urazova on the beam — and either could medal with a good performance.

Only eighth in qualifying, she is another competitor who could benefit from her degree of difficulty. Her beam routine could be the best (not counting Biles). She also has the highest honor in the field, a silver medal behind Biles at the world championships.

Given that she qualified ninth, got a spot in the all-around only with Biles’s withdrawal, and did not even participate in the team event for the United States, Carey would seem like a long shot. Her beam is weak, but she has a special floor routine and can score well on the vault as well. She could be a surprise medalist.