The Super Netball commission could change the result of the drawn game between the Giants and West Coast Fever when it meets on Tuesday.

The league's new independent body will hear the findings of an investigation into the 62-62 draw on June 8, which ended in controversy due to a time difference between the stadium scoreboard and the official timekeeper, as they are not synchronised. 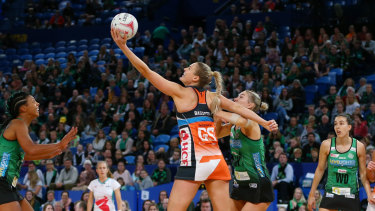 Time’s up: the whistle was blown before Giants shooter Caitlin Bassett could get her shot awayCredit:AAP

Giants shooter Caitlin Bassett caught the ball in the goal circle with what she believed was five seconds left and scores tied 62-62. She then turned, lined up her shot and scored what she thought was the winning goal.

But as the ball dropped through the net the umpire ruled it out and said time had already expired. Unless there was an error between the umpire and timekeeper, which appears unlikely, then the stadium scoreboard had fallen behind the official time, which can be stopped and started when the ball goes out of court or other delays.

The timer on the television coverage showed one second left, but that is also not synchronised with the official timekeeper, who sounds the buzzer and alerts the referee via a wrist bracelet when time has expired.

Super Netball and the two clubs wouldn't comment on Thursday due to the ongoing investigation, but The Age and The Sydney Morning Herald understand a change in result cannot be ruled out, though the commission could focus on finding a way to synchronise the scoreboard with the official timekeeper.

With both clubs battling for finals positions the result of the hearing could prove telling, especially for the Giants, who sit in fourth place heading into round nine this weekend. The Fever sit in sixth place, just six points off the Giants.

Super Netball teams receive four points for a win and battle for a bonus point each quarter (four total), which go to whoever scores the most goals.

The two clubs earned four points each from the game.

The Giants and Fever were both asked to make submissions to Super Netball this week on the game.

It's understood the Giants are less focused on changing the result and more focused on avoiding a repeat of the situation in future.

The Fever issued a short statement to confirm they were co-operating with the league and wouldn't comment until the process was complete.

Bassett made her opinion known on her official Facebook page on June 10, which in part read:

"With five seconds on the clock, the ball lands in my hands and I am confident knowing there is enough time to score and stop the reply goal from the opposition," Bassett wrote.

"It is not until the goal is through the ring do I look and I see the umpire signal for no goal. The umpire's timer and the stadium clock were not in sync.

"As a player, to have no clear idea of the exact time left in a game is extremely frustrating. I'm in no way blaming the umpires or match officials; we led the entire game and had opportunities to push out the margin but failed to capitalise.

"So, when a game is tight in the final minutes how can we be certain of how much time is actually on the clock?"

Bassett said players and coaches must know what the exact time is.

"In numerous other sports the umpires' clock is visible or directly linked to a teams coaching box and score bench," Bassett wrote.