Faf du Plessis backed a hunch that spinner Keshav Maharaj would capture the prize wicket of Ben Stokes to set up South Africa’s victory over England in the first Test at Centurion.

England appeared to be in with a chance of chasing down their target of 376 as they passed 200 with Stokes and skipper Joe Root entrenched at the crease.

But Maharaj struck a vital blow for the Proteas when he bowled Stokes for 14 with a delivery that spun out of the rough and took out the all-rounder’s off stump in his second over.

Although Maharaj had conceded 13 runs in his previous over, South Africa skipper Du Plessis maintained faith in the left-armer to achieve the key breakthrough as the home side went on to bowl England out for 268.

“We had a lot of confidence in Kesh,” said Du Plessis. “We kept saying that in the second innings Kesh would get Stokes out.

“He has got him out a few times and we just had a gut feeling. Stokes was a massive wicket for us at that stage – he has proved that if he is around he can win the game on his own. “As a team we don’t have a lot of superstars. You take a lot more from victories where everyone contributes in their own way.

“Our bowling unit was exceptional. All of them put their hand in when the wicket didn’t dry out and they needed to be top of their game.”

South Africa’s 107-run victory was their first Test success since they beat Pakistan almost a year ago, having lost series to Sri Lanka and India during the intervening months. 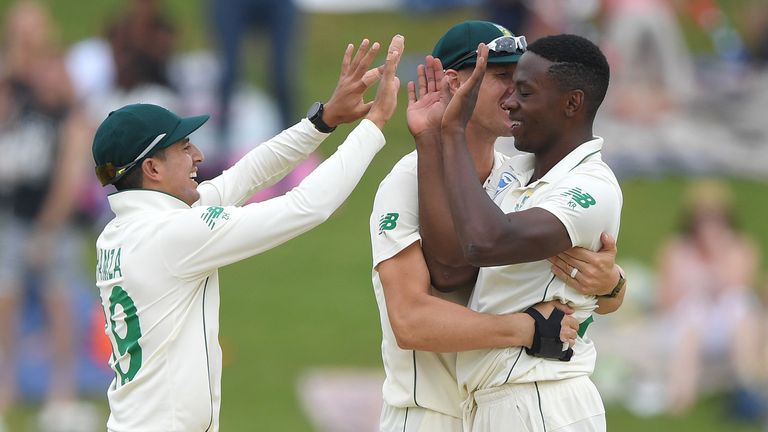 But Du Plessis believes his side will now head into the second Test in Cape Town – which begins on Friday, January 3, live on Sky Sports Cricket – in high spirits after taking a 1-0 lead in the four-Test series.

He added: “It’s been a tough year. It’s been a while since our last victory, but we trained hard and there was a good feeling in the camp that we had done some really good preparation before the Test.

“We knew we needed to put in some performances to get the engine running and I thought that, in all departments, we were really good in this Test match. “England were good at stages as well, but the way we played – especially in the last two days when the wicket did get a little bit flatter – the guys’ skill was remarkable and consistent all the time, made it a good start.