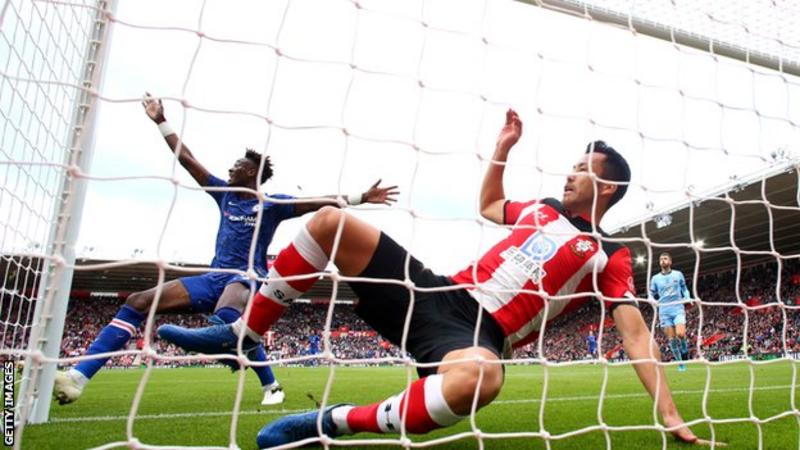 Tammy Abraham scored his eighth league goal of the season as in-form Chelsea swept aside Southampton at St Mary’s to climb to fifth in the Premier League.

Chelsea dominated from the outset and took the lead when Abraham’s looping finish from Callum Hudson-Odoi’s pass was adjudged to have crossed the line before Maya Yoshida’s intervention.

The visitors restored their two-goal advantage five minutes before half-time, N’Golo Kante’s strike from the edge of the area taking a wicked deflection off Pierre-Emile Hojbjerg on its way past Angus Gunn.

The result leaves struggling Southampton in 16th place – just one point above the relegation zone.

After a stuttering start to the campaign, there are signs that this youthful Chelsea side are beginning to build up a head of steam under Lampard.

This was the Blues’ fourth successive win in all competitions – a result which lifts them level on points with fourth-placed Leicester City and only two behind champions Manchester City, who lost 2-0 at home to Wolves.

Youngsters Abraham and Mount have taken the top flight by storm after spending last season on loan at Aston Villa and Derby County respectively, and the duo were heavily involved here as the visitors raced into an early lead.

Hudson-Odoi sent a long ball over the top of the Southampton defence and Abraham was first to it, his looping finish over Gunn crossing the line before Yoshida could clear the ball to safety.

Chelsea capitalised on a poor piece of Southampton defending to double their lead seven minutes later, Mount latching on to Willian’s precise pass before slamming home his fourth league goal of the campaign.

There appeared to be no way back for the Saints at that stage as Chelsea continued to lay siege to the home goal, but Ralph Hasenhuttl’s side pulled a goal back out of nothing when Valery wriggled his way past several Blues defenders before setting up Ings, who was left with an easy finish.

There was an element of fortune about Chelsea’s third – Kante’s speculative drive deflecting off Hojbjerg and wrong-footing Gunn – but the dominant visitors could have won by a higher margin.

Hudson-Odoi was thwarted by Gunn four minutes after the restart, while Abraham and Willian both had goal-bound efforts blocked from the edge of the area.

Batshuayi eventually completed the scoring in the final minute of normal time, running on to Pulisic’s pass and slotting the ball through Gunn’s legs.

Mateo Kovacic (Chelsea) wins a free kick in the defensive half.

Attempt missed. Che Adams (Southampton) with an attempt from the centre of the box misses to the right. Assisted by James Ward-Prowse with a cross following a set piece situation.

Goal! Southampton 1, Chelsea 4. Michy Batshuayi (Chelsea) left footed shot from the left side of the box to the bottom left corner. Assisted by Christian Pulisic with a through ball.

Pierre-Emile Højbjerg (Southampton) wins a free kick in the defensive half.

Yan Valery (Southampton) wins a free kick in the defensive half.

Jan Bednarek (Southampton) wins a free kick in the defensive half.

Attempt missed. Danny Ings (Southampton) header from the centre of the box is close, but misses to the right. Assisted by James Ward-Prowse.

Attempt saved. Maya Yoshida (Southampton) right footed shot from outside the box is saved in the bottom left corner. Assisted by Danny Ings.

Shane Long (Southampton) wins a free kick in the defensive half.

Attempt blocked. Callum Hudson-Odoi (Chelsea) left footed shot from the right side of the box is blocked.

Attempt saved. Tammy Abraham (Chelsea) right footed shot from outside the box is saved in the centre of the goal. Assisted by Mason Mount.

Attempt missed. James Ward-Prowse (Southampton) right footed shot from outside the box is too high from a direct free kick.

Nathan Redmond (Southampton) wins a free kick in the attacking half.

Jan Bednarek (Southampton) wins a free kick in the defensive half.

Jorginho (Chelsea) wins a free kick in the defensive half.