The heaping of scorn on the Olympics for not giving up on Tokyo 2020 ignores the fact that the Games are no mere sporting carnival.

They are a national project, sucking in vast sums and bureaucratic energy in the fields of infrastructure, transport and technology. 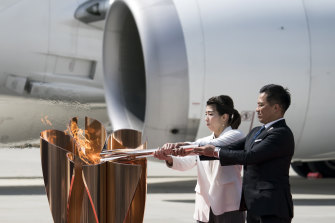 Organisers are pushing their luck until pretending everything will be all right on the night is no longer an option. But as athletes rebel over lost qualifying and training plans, cracks are appearing.

An official from the Japan Olympic Committee has told the Nikkei daily: ‘‘It should be postponed under the current situation where athletes can’t be well prepared.’’

Japan’s deputy prime minister, Taro Aso, had already expressed the fear, or superstition, that the Games were ‘‘cursed’’ every 40 years by world events. Whether Tokyo proceeds, is postponed or lost altogether, it can be viewed as a hostage to fortune, a vast economic gamble in an age when ‘‘gigantism’’ continues to shape IOC policy: a hubris that can leave host countries impaired, often at their own hands.

Capital cities now see staging the Olympics as an opportunity to enact huge infrastructure change. In some cases, such as Rio and Sochi, they also offer elites a chance to carve up big construction budgets.

Beijing in 2008 is the outlier in recent years. Conceived as a message to the world that the 21st century would be China’s time, the project was facilitated by high economic growth and state control.

Athens (2004), London (2012) and Rio de Janeiro (2016) have all borne ‘‘curses’’ of one sort or another. The Greek Games of 16 years ago left towering bills and a swathe of white elephants. London 2012, though enjoyable and beneficial from an infrastructure perspective, is now statistically the dirtiest Games in history and left a £550 million ($1.1 billion) main stadium that has ended up as a ghost ground for West Ham. The Rio Games turned out to have been a carnival of corruption.

Aso’s 40-year ‘‘curse’’ referred to the loss of Japanese staging rights in 1940 and the Moscow boycott of 1980. Less mystically, Japan faces the prospect of people from 206 countries descending on Tokyo during (or at best, very soon after) a global pandemic.

True to the long tradition of cost overruns, the Tokyo Games are in deep water. When the city won the 2020 bidding race in 2013, the budget was set at $US7.3 billion ($12.5 billion). But in December, the country’s National Audit Board found that the original estimates had been wildly optimistic. The total bill was estimated to be nearer $US28 billion ($48 billion).

The author of an Oxford University study on cost overruns, Bent Flyvbjerg, told reporters: ‘‘It’s the most amazing thing that the Olympic Games are the only type of mega-project to always exceed their budget.

‘‘We think it’s because they always have to be on time. There’s no way you can move the opening dates. So all you can do when problems begin – and problems always begin on projects of this size – is to throw more money at the project. And that’s what you do at the Olympics.’’

Other ‘‘curses’’ include the high summer temperatures that forced the IOC to move the marathon and race walk further north to Sapporo, athlete concern over radiation levels around Fukushima, and maps showing disputed territories as part of Japan.

Every Olympics is riddled with pre-Games angst, from Japanese knotweed on the London Olympic site to dead dogs in the water on the Rio sailing course. Usually, the Games battle through.

But this time a pandemic has exposed the quixotic nature of the modern Olympic spectacle and the burdens that host countries take on – and are forced to take on – to feed the Olympic ego.