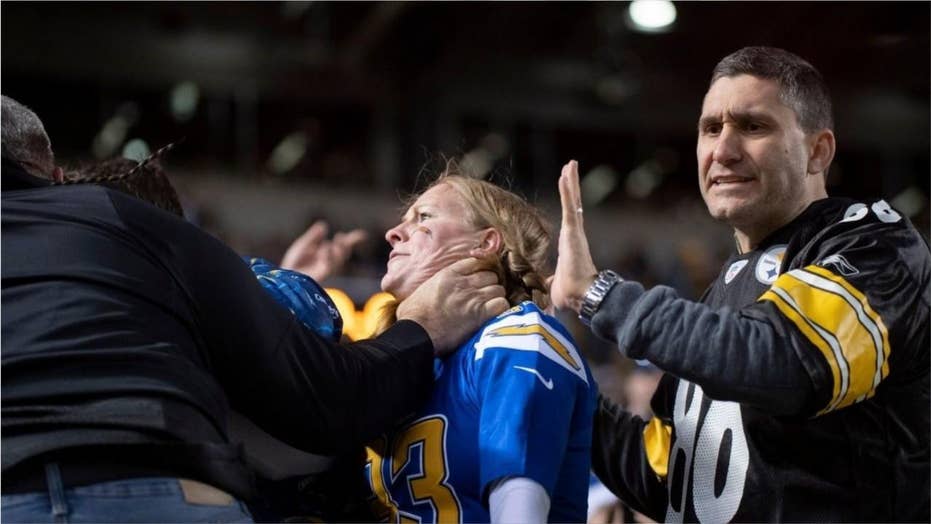 A Pittsburgh Steelers fan was caught in stunning photos and video choking a pregnant San Diego Chargers supporter during a game at Pennsylvania’s Heinz Field.

The altercation appears to begin with a man in a suit emblazoned with Chargers logos fighting a man dressed in blue jeans and wearing a black jacket. At one point, a woman in a Chargers jersey — who is reportedly pregnant — steps in the middle of the fracas. As she intervenes, the Steelers fan in the black jacket, who has not been identified, is seen grabbing her throat.

Daniel Minshew told the Pittsburgh Current he and the woman, who was not identified, are married and from San Diego. He said he had been “heckled and yelled at prior to the attack” but “never experienced anything” like Sunday's fight. He told the Current he planned to call police and file charges.

The Steelers released a statement saying they were cooperating with local authorities to investigate the incident.

“We strive to make events at Heinz Field safe for our guests,” the statement said. “This type of behavior seen in the photo is unacceptable and something we do not condone on our property. We are working with Heinz Field security as well as local authorities to gather more information on this particular incident as the Pittsburgh Police determines whether or not to press charges, and we will ensure those involved as the aggressors will not be permitted back into our stadium.”

In addition to the choking incident, the game included a number of other brawls in the stands, KDKA-TV reported. The Chargers beat the Steelers, 33-30.