THE HIGHS OF THE DECADE

The American swimming machine continued to dominate the major international meets, churning out superstar after superstar to ensure their iron-grip on the sport tightened. Even when one legend retired, another superfreak simply arose to take their place.

The gradual eradication of the controversial supersuit was a welcome historical rewrite as many of the pacesetters from the shiny suit era were overtaken by new champions. Even those whose world records looked as if they would never fall are now in danger of being rattled.

Towards the very end, the rise of the International Swimming League, a professional breakaway competition, changed the rules for swimmers and allowed them to earn money outside of the FINA stranglehold. Even if the ISL fades in the future, the precedent has been set and the sport changed for the better. 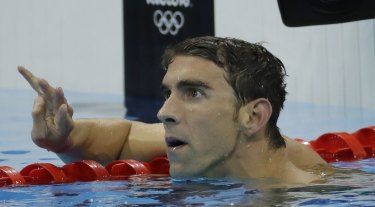 As with many Olympic sports, doping was a constant issue. It came to a bitter head at the Rio Olympic Games when athletes rose up in defiance of what they perceived to be a lack of real action from FINA and anti-doping authorities.

Australia's Mack Horton famously called Sun Yang a drug cheat before he beat him in the 400m freestyle final, a feud which took an even more dramatic turn at the 2019 FINA World Championships when he refused to share a podium with the Chinese star. Sun, in turn, would dominate headlines for his smashed vial case, which ended up in front of a public hearing at the Court of Arbitration for Sport.

Australia would have a doping case of its own when Shayna Jack returned a positive sample earlier this year. There were other moments of madness; American star Ryan Lochte going rogue in Rio on a drunken night out, then filing a false police report suggesting he was robbed at gunpoint, was the pick of them. Sun Yang had too many run-ins to mention but he was the sport's most controversial character by far. 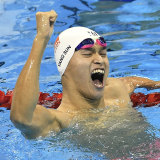 Sun Yang, the decade’s most controversial figure in the pool. Credit:AP

Michael Phelps was a dominant force in the 2000s and his impact didn't wane much in the following decade. He won four gold medals at the 2012 Games in London, which he said would be his last. But he returned for a swansong in Rio, where he won five golds to officially end the most decorated career of them all.

American freestyler Katie Ledecky surged onto the world scene in London as a 15-year-old and would go on to take the women's distance events to areas few thought possible. She had quite literally been racing the clock for years until Australian teenager Ariarne Titmus stunned her in the 400m at the 2019 Worlds, setting up an Olympic clash for the ages in Tokyo.

Another American, Caeleb Dressel, emerged towards the end of the decade to mark himself as the sport's next face. Kyle Chalmers and Horton were Australia's individual gold medal winners for the decade, while the women's 4x100m relay team, starring Cate and Bronte Campbell, has been almost unbeatable.

Australia's efforts in the 2012 Olympic pool left them with no individual gold medals and the cultural issues outside of the pool deck, lowlighted by the Stilnox scandal, would lead to a full review of the national set-up. This would lead to the appointment of Dutch head coach Jacco Verhaeren, who would end up being a crucial signing as he rebuilt an excellent squad ahead of the 2020 Games.

FINA, the sport's governing body, hardly covered itself in glory. Faced with some competition as swimmers sought income from other sources, it threatened to ban them from the Olympics instead of trying to move with the times. The tragic death of former Australian swimmer Kenneth To, who died from a medical condition in the US, united the sport in grief. 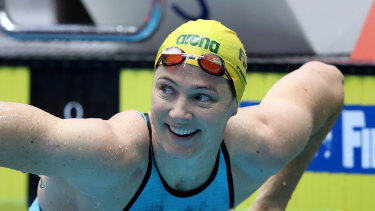 Cate Campbell’s comeback after Rio disappointment has been inspirational.Credit:Getty Images

THE BOLTS FROM THE BLUE

Cate Campbell was the unbackable favourite for the 100m freestyle in Rio but couldn't produce in the final, being upstaged by American Simone Manuel and Canadian teenager Penny Oleksiak. It was a huge blow but her return to the top has been inspiring.

The other two notable upsets both involved Phelps. He was upstaged by South Africa's Chad le Clos in the 200m fly in London and by Singapore's Joseph Schooling in the 100m fly in Rio. Chalmers' 100m freestyle win in Rio was one few saw coming. At just 17 and still at school, he snuck under the radar then exploded in the final to swamp them and stun the world.

Australia will have one of its most successful Olympic Games for decades in Tokyo, with a blend of young stars and established guns helping them perform across the board, especially in the relays. Cate Campbell's gold medal will be one to savour while Chalmers and Horton will go back-to-back in the 400m and 100m freestyle. Ariarne Titmus will rise and rise and finish the decade as one of the nation's greatest swimmers. The ISL won't see out the decade but its role in reshaping the sport will be its legacy.