The Swifts have overcome a tumultuous week of COVID-19 chaos to defeat the West Coast Fever 66-65 in a win which has propelled the NSW side to the top of the Super Netball ladder.

In a fitting celebration of co-captain Maddy Proud’s 100th game, the Swifts were able to stand strong in the face of a flurry of last-minute Super Shots from the Fever to claim the points. 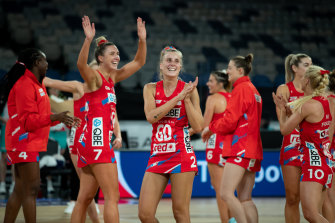 The Swifts celebrate their one goal win at John Cain Arena. Credit:Getty

Proud said the win over the Fever – who have proven themselves one of the strongest sides in the league this year – was the result of the team banding together through a challenging week.

The Swifts were relocated to Victoria after spending a week in hotel isolation in Queensland.

Upon arrival, the Swifts were informed the Victorian government would not count their Queensland isolation time in the required 14 days’ quarantine, meaning the club will now spend three weeks in hotel isolation.

“When you haven’t got a lot a whole lot to do outside of [training and playing] it means you make the most of every single moment that you do have when you are out doing what you love,” Proud said.

“That was our focus this week. Every sacrifice we’ve made, everything we’ve done has been to be able to be on this court and to be playing today.”

Briony Akle praised her side’s resilience. The situation forced the Swifts coach to split up her family; Akle has four sons but has only taken two with her to isolate in Melbourne.

The Fever have also been forced into 14 days of quarantine in Melbourne but flew directly from Perth.

“It makes all the sacrifices worth it,” Akle said.

“Knowing what we’ve all been through has probably even made us more connected which is scary. We’re taking it as a positive and time to reflect and act. The sweetest thing we can do is win and that’s exactly what happened.”

In what will likely be a major training focus this week for the club, the Swifts failed to come out firing, losing the first quarter 19-14 despite huge defensive efforts from both sides.

But Swifts star Sophie Garbin ensured the side kicked into gear, with the NSW side taking the lead 35-32 at half-time.

The Swifts extended their lead to nine before the final 15 minutes with the Fever piling on the Super Shots in the last five minutes.

The Swifts and Giants were supposed to be released from hotel isolation on July 7 but with the Victorian government denying Netball Australia’s request for teams to have isolation in other states recognised, the date has been pushed back to July 14.

Sports news, results and expert commentary. Sign up for our Sport newsletter.