The Sydney to Hobart’s most recent winner Jim Cooney is confident he can keep up with super maxis as he prepares to sail in his first Boxing Day campaign after selling winning vessel Comanche.

Cooney sailed the famous super yacht, worth approximately $100 million, to two successful Sydney to Hobart campaigns in 2017 and 2019 to establish a fierce rivalry with Wild Oats XI.

This year, Cooney will instead skipper Willow, a 70-foot boat compared to the 100-foot super maxis, after selling Comanche to Russian interests but said he was confident in being able to catch up to the bigger boats.

The Willow, formerly Maserati, finished sixth across the line and seventh overall the last time Cooney captained the boat in 2016.

“It’s a great boat. We can press on it hard when other boats are worrying about survival, so we will keep our foot on the gas and try and stay as close to the 100-footers as we can,” he said.

“We will be chasing them down as best as we can. We hope to not be far behind.”

Cooney knows anything can happen in Sydney to Hobart. Many of Cooney’s crew have been flown into Sydney international with a star-studded team coming together to race the boat to Hobart.

While the supermaxis are the obvious favourite to take line honours, Cooney says you can never say never when it comes to the famous Boxing Day race. 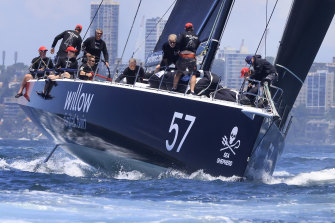 The crew of the Willow training earlier this month.Credit:Getty

“All things being equal we are set to be the next boat behind the 100-footers and we were pretty close to them in the Cabbage Tree race,” he said, referring to one of the pre-event races.

Many skippers have made the difficult decision to call off last-minute training in an effort to avoid an entire crew catching the virus or being identified as close contacts so close to Boxing Day.

Last year’s race was called off just a week ahead of the race with Cooney fearing it could happen again. Cooney said while both the Tasmania and NSW government were unlikely to shift in their support of the race going ahead, a number of boats being identified as close contacts could threaten the race.

“It can end for a number of reasons. But if there were suddenly a significant number of boats with positive tests in the next two days the race would have to think about whether there is a risk,” he said.

A number of crews have been forced to ditch their Christmas activities due to fears their campaign could be ended by just one positive case on the boat.

Cruising Yacht Club of Australia commodore Noel Cornish said earlier this week he was “very confident” the race would go ahead as planned.

“We’re getting wonderful cooperation from both the NSW and Tasmania governments and I know all the crews and skippers are being very conscious. They’re keen to open up and work with us. They seem to be happy with all the plans we’ve put in place,” he said.