A statewide task force assembled by Gov. Gavin Newsom to tackle the homelessness crisis in California is proposing an amendment to the state’s constitution that would allow for sanctions on cities that fail to make progress in getting people off the streets.

“We’ve tried moral persuasion. We’ve tried economic incentives,” Steinberg told the Los Angeles Times on Monday. “But all of it’s optional. Why should this be optional? It shouldn’t be. It mustn’t be. Thousands of people are dying on the streets, and people are telling us this is a priority.”

The plan was announced Monday, the same day Newsom hit the road on a weeklong homelessness tour starting north of Sacramento in Nevada County, which will receive $1 million out of the $650 million emergency aid allocated in the state budget last year. 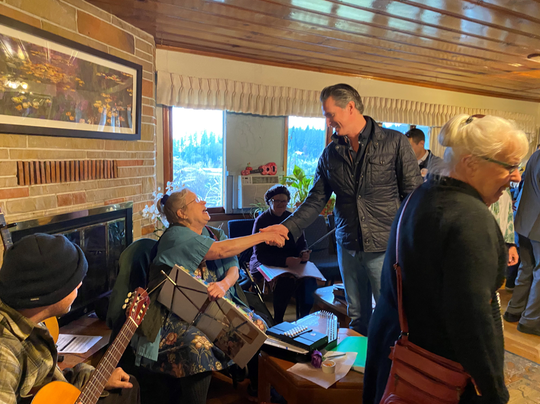 Those funds are now being rolled out, and Newsom shared in his budget briefing last week that he hopes to add $1 billion this year to fund a statewide response to the crisis.

“Homelessness isn’t just a concern in our cities,” Newsom said in a statement, “it’s a suburban issue and a rural issue, too. No Californian can say that homelessness is someone else’s problem.”

Later this week, he has plans to stop in the Inland Empire, Los Angeles, the Central Valley and the Bay Area.

Homelessness has been on the rise in California, growing by more than 16% between 2018 and 2019, despite statewide efforts to find solutions. More than 150,000 Californians are currently without housing, the majority of whom sleep outside or in vehicles each night. The Bay Area city of Oakland, grappling with skyrocketing housing costs, has seen the most dramatic rise. Tent encampments line the sidewalks and fill freeway underpasses. In only two years, homelessness there increased by 47%.

Oakland’s Mayor Libby Schaaf is a member of the task force and said the move will help coordinate and streamline efforts to ensure all jurisdictions do better.

“When something matters we make it the law, and it’s time to make ending homelessness the law” she said at the task force meeting.

Like stories about the Golden State? Click here to get our In California newsletter in your inbox.

Localities would be responsible for setting big goals with timelines. Jurisdictions that fall behind — including the state government itself — could find itself in legal trouble, and be sued by the state.

The California Legislature has until June 25 to approve a state constitutional amendment before it can be put to voters in a ballot measure this November. If enacted, California would be the first state to create such a mandate. There are no details yet on how much it would cost taxpayers.

“Counties are the service providers in our communities and will continue to lead to tackle the crisis of our time, homelessness,” the association wrote in a statement, calling the recommendations “big and bold steps toward progress.”

“A legally enforceable mandate can only work with clarity of who’s obligated to do what and what new sustainable resources will fund it; that’s the ticket for clear expectations and accountability,” the association added.

The plan replaces a previous idea floated by Steinberg that recommended the state deploy a “right-to-shelter model,” a strategy used in New York that requires unhoused people to accept any available shelter offered. It was widely criticized by homeless advocates.

Implemented under former New York Mayor Rudy Giuliani, the policy enabled the police to crack down on encampments and arrest anyone unwilling to stay in shelters.

“I believe we can avoid some of the undesirable aspects of the ‘right to shelter’ as it has manifested itself in New York,” Ridley-Thomas told Politico last month after it was proposed. “But I don’t think we should lose sight of the fact that less people die on the streets in New York than they do in California.”

Gabrielle Canon is a California Reporter for the USA Today Network, based in Sacramento. You can reach her at gcanon@gannett.com or on Twitter.