SUMMERVILLE BOY won the Supreme Novices’ Hurdle in 2018 before losing his way a little over timber. He made an instant impact on his chase debut at Uttoxeter last month, jumping well and asserting in the closing stages. 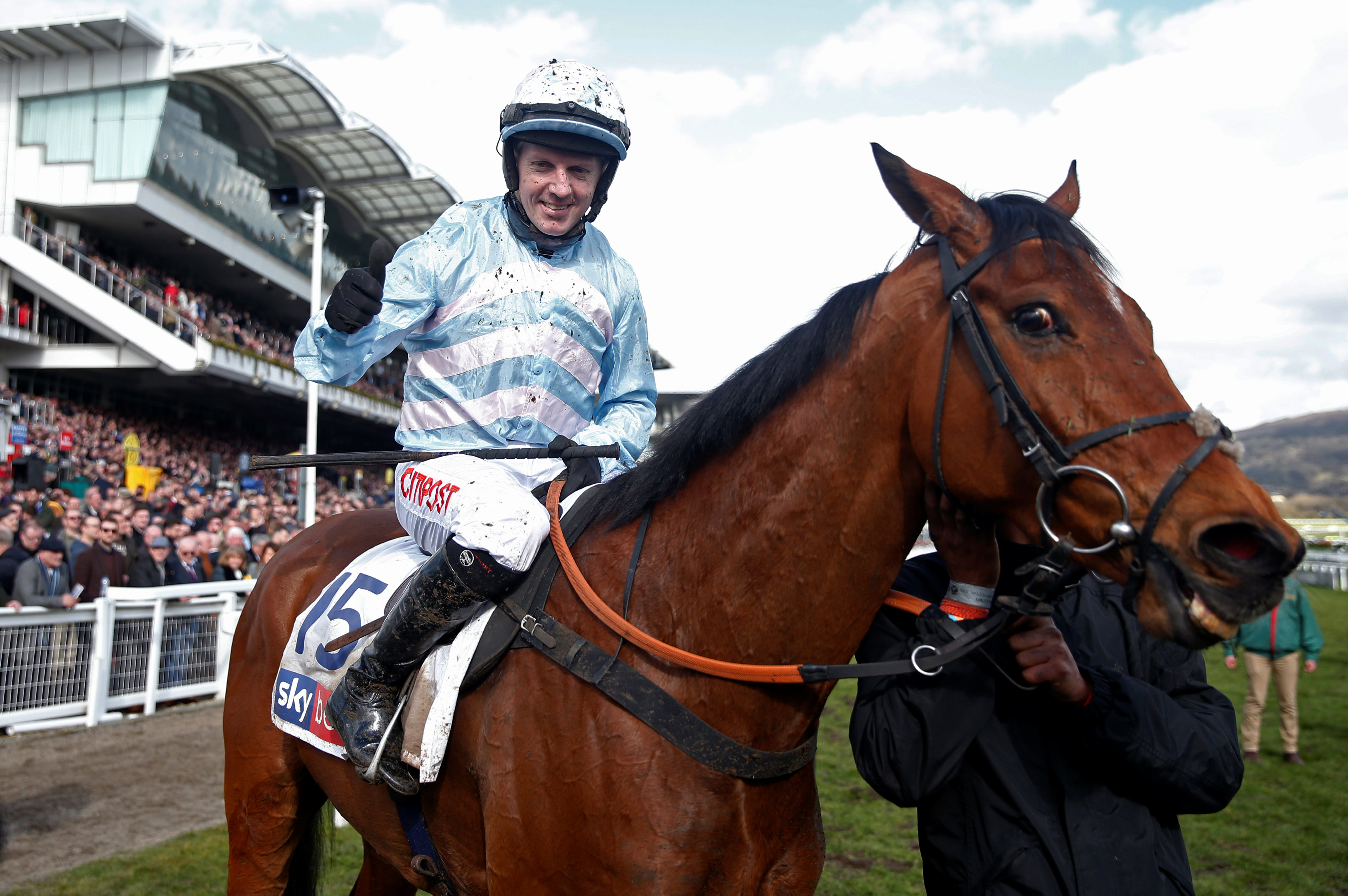 He should learn from that and has a lot more to come.

Nube Negra has cruised to victory on both chase runs and deserves this hike in grade. He jumped well when scoring at Fakenham and looks the main danger.

Torpillo didn’t scale the tip’s heights as a hurdler but he was decent and translated that form to the bigger obstacles when winning at Warwick 17 days ago. This trip is ideal and he won’t be far away.

Grand Sancy is an interesting newcomer to the chasing game. He won the Grade 2 Kingwell Hurdle at Wincanton in February and was second there last time.

He has more to offer over timber so it’s interesting to see Paul Nicholls run him here. He has plenty of zip and won’t mind a little cut in the ground.

The rest have plenty to find but Esprit Du Large won nicely at Exeter in the mud last time and the rain around Sandown will have helped his chances.

SMARTY WILD clocked a personal best when winning a decent handicap at Exeter last time. He was value for further than the two-length margin and a 4lb rise in the weights looks more than fair.

Mack The Man came back from eight months off to score well at Warwick. He likes some give in the ground and is open to improvement on this hike in class.

Protektorat has few miles on the clock and was aimed at some classy races last season. He had his sights lowered when finishing a good second here after a break latest and has more to come.

Song For Someone was consistent last season before finding Grade 1 company too much at Aintree. He returned for a bloodless win at Fontwell last month and can’t be ruled out despite a harsh 11lb hike in the weights.

Ashutor showed promise on his handicap debut for Paul Nicholls at Huntingdon two Saturdays ago. He has a capable rider taking 7lb off here and the first-time cheekpieces could help too.

Theo’s Charm goes up in class after a solid second at Lingfield last month. He would relish more rain but is consistent and could run into the frame. 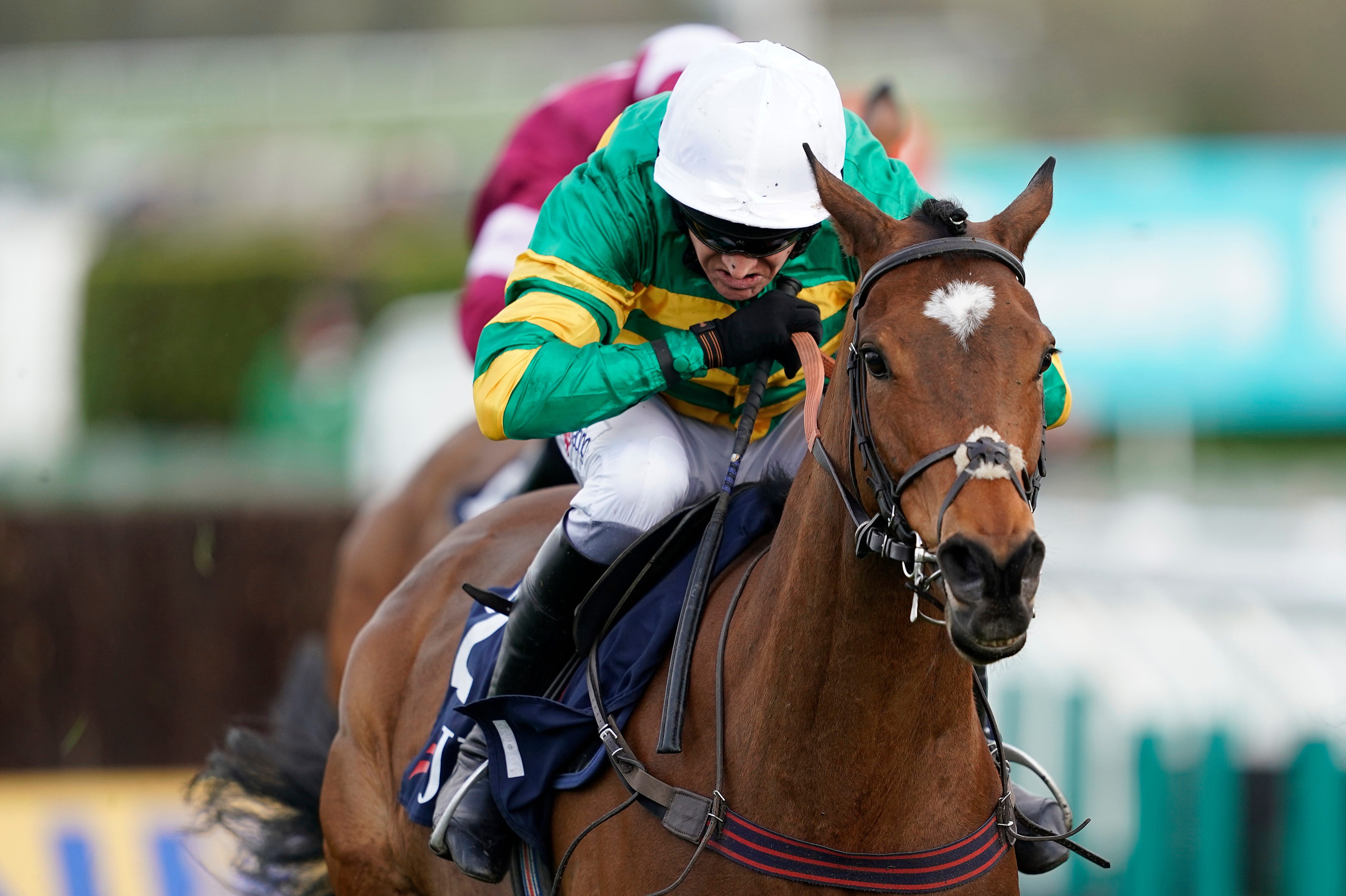 DEFI DU SEUIL can build on his impressive comeback win at Cheltenham where dropping to this trip was no problem. He picked up well to scoot past his rivals up the hill and Sandown’s run-in should suit too.

He can put himself right in the Champion Chase picture by seeing off these talented rivals.

Un De Sceaux is getting on a bit but looks the biggest danger. He chased home Altior in this last year and won it in 2016. He signed off last season by winning the Punchestown two-miler and some cut suits.

Politologue is 3lb better off with Defi De Seuil for his Prestbury Park defeat. That should bring them closer together but he usually peaks with his first run of the season so has a little to prove.

Sceau Royal likes it here and was second in the Grade 1 Celebration Chase in April. Only Altior was too good for him that day and he looks a good price to fill one of the places.

Janika may struggle a little for pace over this distance but he clocked a career-best when winning the Haldon Gold Cup at Exeter on comeback last month. He’s only six so there could be more to come.

ROYAL VACATION can take the London National. He ran a cracker when third in the Badger Ales Chase at Wincanton last time. He was plodding on at the end of 3m1f so this longer trip should be ideal.

He looks on a fair mark and Robbie Power has had plenty of success for Colin Tizzard already this season.

Step Back loves it here and won the Bet365 Gold Cup in 2018 before finishing third in that race in April. He jumps to his right which is why Sandown suits so well.

He has lots of staying power and is a contender after a breathing operation. Carole’s Destrier made a crucial error when going well before being pulled up in the Scottish National.

As a six-year-old, there should be more to come. Sharp Response was an improved second at Haydock last time and sees out this marathon trip well.

He has a chance, while Houblon Des Obeaux scored here latest and can’t be dismissed in this stronger race. Dark Flame is another interesting runner after chasing him home coming back from two years off. 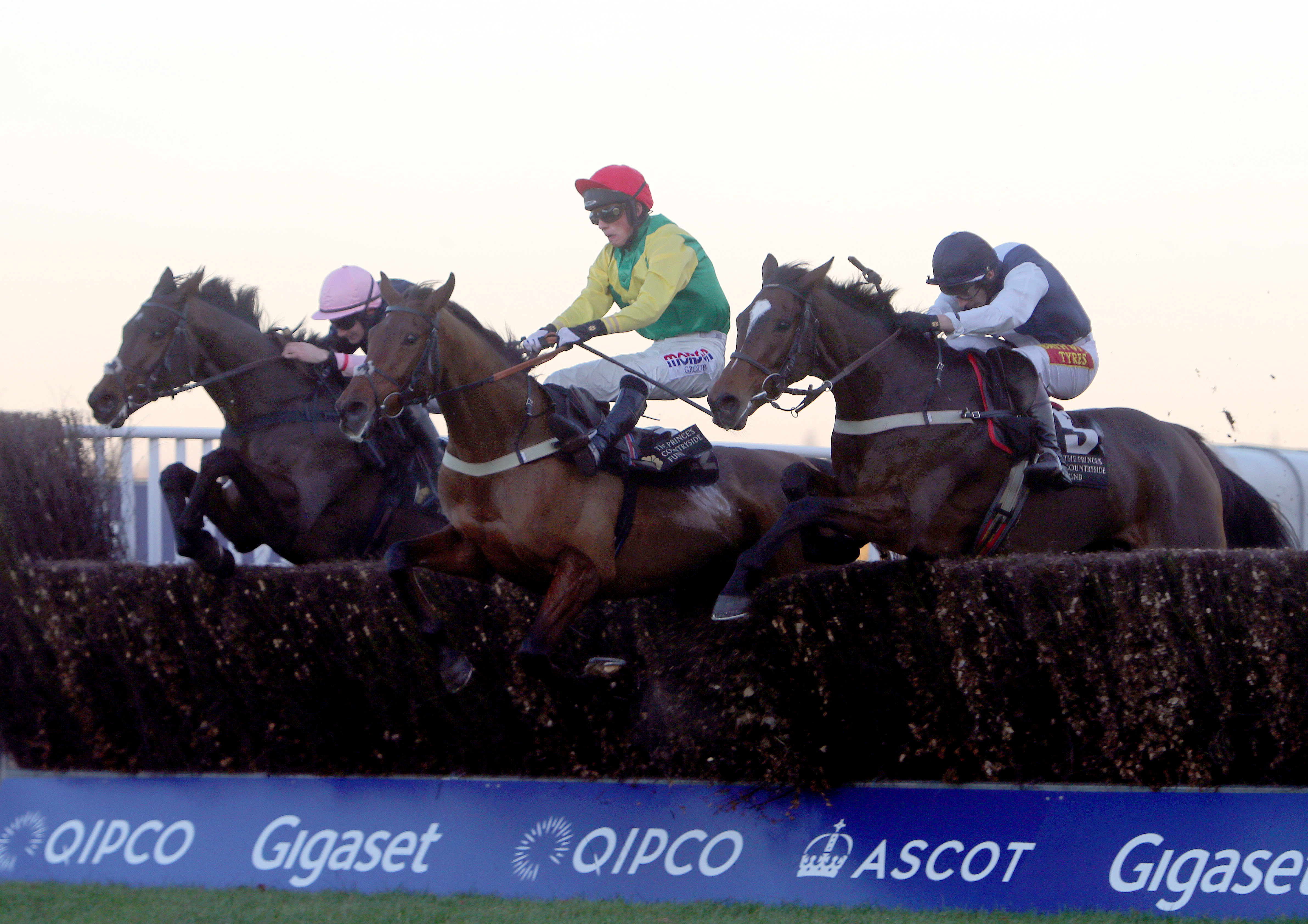 WALK IN THE MILL won this last year and can follow up from just 4lb higher in the weights. He underlined his love of the Grand National fences by finishing fourth in the big race in April when his stamina didn’t last home over the extra mile.

He was rusty on comeback at Wincanton but this has always been the target. Vieux Lion Rouge has jumped around here seven times and won this race in 2016 before finishing second last year.

He is fit from a spin over hurdles and should be in the mix again. It will be interesting to see how Mulcahys Hill and Abolitionist take to these fences at their first attempt.

They are both talented chasers who stay well and look well weighted so should figure. One For Arthur won the Grand National two years ago and there have been positive vibes from trainer Lucinda Russell. This trip is on the short side for him but the fences suit and he’ll be running on at the finish.

Vintage Clouds took a tumble at the first when backed for the National in April. He didn’t get home in the Scottish National after that and was good enough to finish second in the Ultima at Cheltenham over this trip. He’s a player.

By placing a £10 bet on today's NAP ULTRAGOLD, William Hill will give new customers £30 in free bets.

You can then place one of the £15 free bets on one of his other strong fancies, Defi Du Seuil or Lord Of The Island.

This leaves you with one more £15 free bet to place, which you can put on the treble which would win you £1513 if it lands.
BET WITH WILLIAM HILL HERE

OPERATIC EXPORT is thrown into the deep end of a Listed race for her hurdles debut. But Dr Newland is in cracking form and has a track record of getting the most out of his horses.

This three-year-old showed promise on the level for Jim Bolger in Ireland and will be well schooled. Gavrocheka looks the pick of those with hurdling experience.

He won a bumper in France and was a promising second over timber at Ludlow last month. There should be more to come.

Midnight’s Gift beat Break The Rules and Local Affair at Fakenham last time in what looks a good race for the track. There is no reason why the form should be turned around but all three are open to improvement on this hike in grade.

Alan King’s runner looks to have the most scope of the trio. Fleursals was going well when taking a tumble at Ludlow last time. She may well have won and has some ability.

She could figure if getting over that setback. Lady Shanawell found this Listed class too much at Wetherby latest after winning a minor race there. That should be the case again unless the first-time visor works wonders. 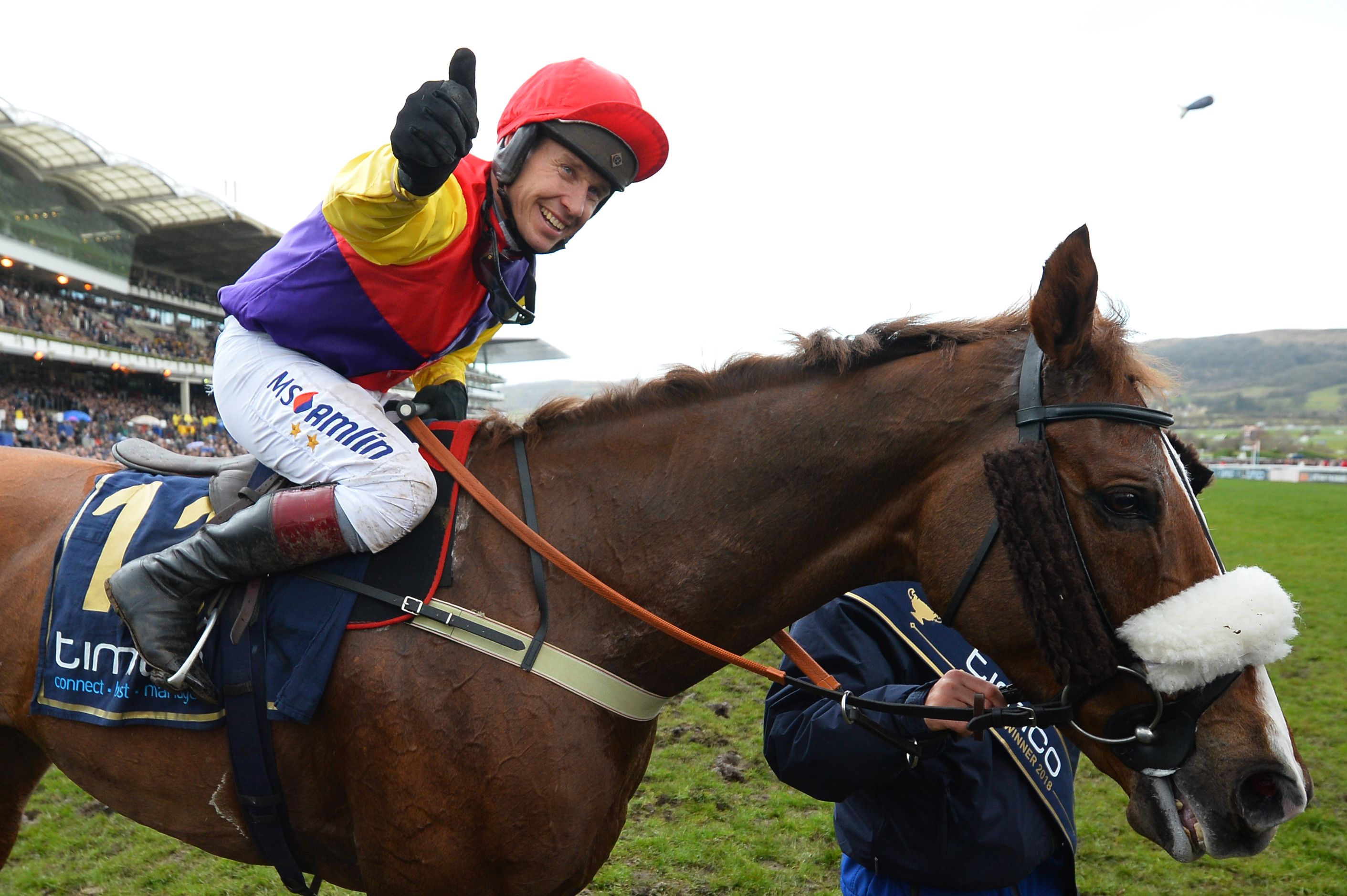 It’s strange to think that two top chasers like NATIVE RIVER and Might Bite failed to win last season. Both are dropping down from Grade 1 level for the first time in a long time and Colin Tizzard’s star can come out on top.

He was a solid fourth in the Cheltenham Gold Cup after finishing third in the King George on Boxing Day. That’s still excellent form and his front-running style is ideal for Aintree.

Might Bite lost his way last term but Nicky Henderson has been making positive noises. His last win came in the 2018 running of the Betway Bowl here and this track clearly suits well. If he’s close to his best — and it’s a big if — he’ll go very close.

Gallant Black Corton is not out of this despite giving weight away to the big two. He is used to lugging big weights in finishing second in the Galway Plate before a gutsy third in a hot Ascot handicap last month.

He should have no issues getting home over three miles at a speed track like Aintree. It’s hard to see Outlander playing a part unless the other three are badly out of sorts. He was last seen finishing ninth in the Grand National. 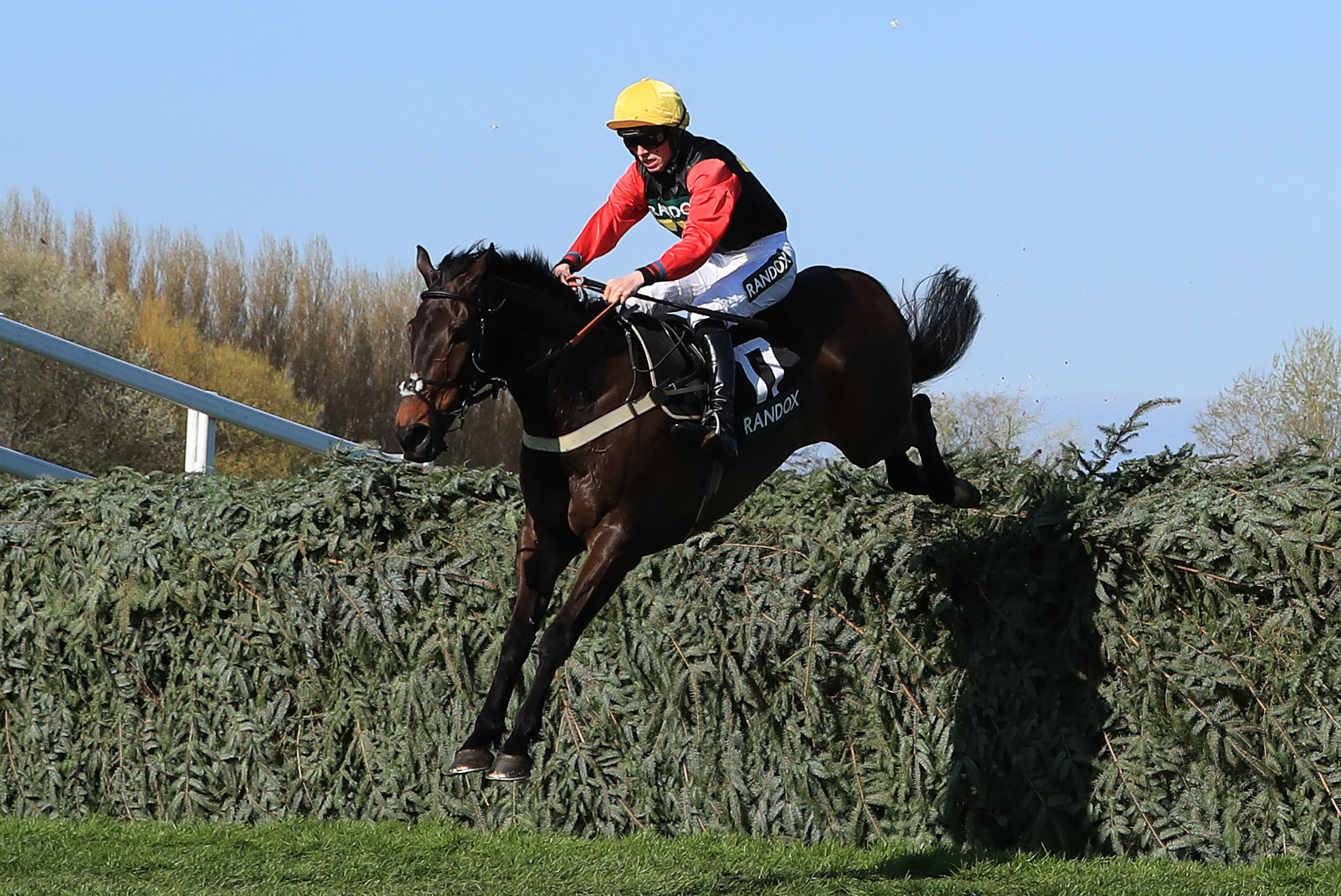 ULTRAGOLD loves these fences with two wins and two places before his 14th in the Grand National when he didn’t stay but still jumped well.

He has won the Topham twice over this distance and is just 1lb higher than the most recent of those. He goes in any ground and can run another big race.

Gold Present was knocked over in the 2017 National but has landed a couple of good wins since and finished last season with a good second in a Sandown Grade 2. He has plenty of weight but is classy and should figure.

Flying Angel was a Grade 1 winner on the Mildmay course as a novice and has jumped round twice over these fences in the Topham. He is quirky but came back to his best when winning at Ascot last time.

Touch Kick has decent form at lower levels and improved to win at Fakenham on comeback. He is improving and owner Trevor Hemmings loves a winner at this track.

Killaro Bay has done well since joining this yard from Ireland. He was a good second over the smaller fences here last time and looks on a fair mark. Further would suit but he could nick a place.