Terry Donahue, who became the face of football at U.C.L.A. as a player and coach, staying in the latter position for 20 years and leading the school to seven consecutive bowl-winning seasons in the 1980s, died on Sunday at his home in Newport Beach, Calif. He was 77.

Donahue won more games than any other coach in the school’s and the Pac-12 Conference’s history, and he ended his career with a winning record against each of the conference’s teams, including the Bruins’ crosstown rival, the University of Southern California Trojans.

Donahue’s streak of bowl victories included Rose Bowl wins in ’83, ’84 and ’86. He was the first person to appear in the Rose Bowl as a player, an assistant coach and a coach.

On the field, Donahue played in 1966 in U.C.L.A.’s first Rose Bowl victory. The team earned the nickname “Gutty Little Bruins” because nobody on the defensive line weighed more than 225 pounds. Donahue, a walk-on, weighed just 195 pounds.

He brought the same overachieving spirit to his tenure as a coach. Some of U.C.L.A.’s best players in the Donahue era, like the future Hall of Famer Jonathan Ogden, came from regions far from California. The famed quarterback Troy Aikman transferred to U.C.L.A. from another college football program. 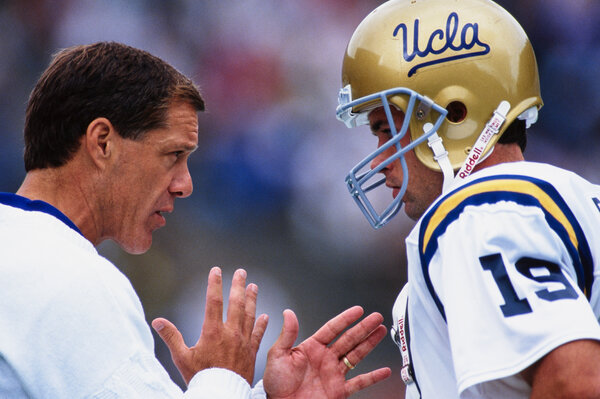 In an article last year about how Donahue’s successors have not measured up to the standard he set, The Los Angeles Times attributed Donahue’s success to his being “a pioneer in national recruiting,” in part by having a scout “scour the country for talent.” N.F.L. teams chose 14 players from the Donahue era in the first round of professional drafts.

In a 2011 interview with The Los Angeles Times, he discussed the level of commitment required to discover and woo young quarterbacks. “You need money, access to an aircraft if possible,” he said. “I went and got players from Ohio, New Jersey, New York, Hawaii, Texas, Oregon.”

A news conference where Donahue announced his retirement in 1995 became a spectacle. The Los Angeles Times said that a U.C.L.A. spokesman prepared two news releases in case Donahue changed his mind. As he began to explain his decision, hundreds of reporters and friends “leaned forward at the same instant,” The Times reported.

“I can’t believe I’m holding this press conference,” Donahue said. “What are you all doing here?”

But he did retire. Twenty-five years later, The Times would write that the U.C.L.A. football program had been “tormented” since Donahue’s departure.

Terrence Michael Donahue was born on June 24, 1944, in Los Angeles to Betty (Gantner) Donahue and Bill Donahue, a physician.

He was a starting linebacker at his high school in the Sherman Oaks section of Los Angeles, but he struggled to establish himself in college, failing to gain a steady position at San Jose State and Los Angeles Valley College before getting a tryout at U.C.L.A. in 1964. He was taken on as a reserve lineman and worked his way up to starter.

“Terry didn’t have a lot of ability, but he had a lot of character, high intelligence and seldom made a mistake,” Jerry Long, a former U.C.L.A. line coach, said.

Donahue graduated from U.C.L.A. in 1967 with a bachelor’s degree in history. He also earned a master’s from the university in kinesiology in 1977.

He got his start as a coach by asking a former mentor, Pepper Rodgers, to take him on as an unpaid assistant for the University of Kansas Jayhawks. When Rodgers became head coach at U.C.L.A., Donahue followed him. Rodgers’s successor, Dick Vermeil, left to coach the Philadelphia Eagles in 1976, and Donahue took over, even though he was in his early 30s.

In 1976, Donahue’s first season coaching U.C.L.A., the Bruins went 9-2-1. An article in Sports Illustrated said he “may be the best young coach in the country.” Known to be relaxed and well tanned, Donahue was asked if he ever felt nervous.

“We’re prepared and we’ve worked hard, so there’s nothing to worry about,” he told Sports Illustrated. “Now if you’ll excuse me, I’m going to go throw up.”