Andrew Fifita beamed with pride as he stepped up to the awaiting media huddle in Melbourne on Wednesday.

The Cronulla star rarely minces his words but he's never been particularly fond of speaking to reporters, either.

Whether he doesn't quite see the point or doesn't trust his words to be accurately portrayed is for Fifita to say but in his media obligations on Wednesday, the 29-year-old was different.

Decked out in his Indigenous All Stars kit, Fifita declared Friday's Indigenous-Maori showdown the best idea the NRL has ever generated.

"It’s the best thing I’ve ever seen the game do," Fifita said.

"Bringing together these two cultures and letting us play for our people."

Fifita has heard the queries raised about his decision to play for Tonga at the World Cup, having already represented Australia in the years prior. 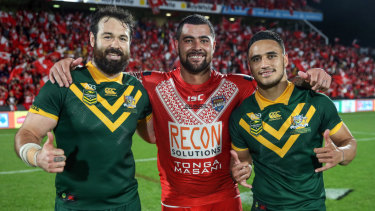 He's heard similar queries raised since being named to play on Friday.

Put frankly, he doesn't care what the doubters say.

In representing Tonga and the Indigenous All Stars, Fifita is lapping up the best of both worlds.

"I’ve just been representing my culture since the start of my career.

"It’s always good to give back to your parents and I’m doing that . . . truly.

"My heart is open for both sides so to be able to get that opportunity to come back and do it for an All Stars side – it’s massive."

Fifita's genuine love for the All Stars concept is crystal clear and he's not alone in the Indigenous camp.

Latrell Mitchell will line up alongside Fifita on Friday instead of featuring for the Roosters in their World Club Challenge clash with Wigan on Monday morning (AEDT). 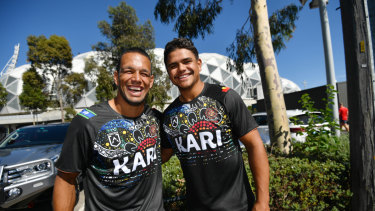 Deadly weapons: Origin foes Will Chambers and Latrell Mitchell will team up for the Indigenous All Stars.Credit:Joe Armao

If faced with the same dilemma, Fifita left no doubt as to which way he would lean.

"It’s a sign in general as to how much this game means to us," he said.

"If I had the chance and they clashed at the same time I would be going to All Stars.

"It’s something in the game we need to grow and we are growing it the right way going against the Maoris."

Mitchell is the frontrunner to fill the shoes of Greg Inglis as the leader of the team's pre-match war cry but either Fifita or Will Chambers appear likely to skipper the side.

Fifita feels he has come a long way leadership wise but admits he is still "working at it".

"I guess coming off a World Cup I got to captain Cronulla on six occasions last year and we’re still working at it," he said.

"It just comes with age.

"Will and I are the oldest guys in the team now and we look down and see all these young ones who are coming through at this level and playing for Australia. 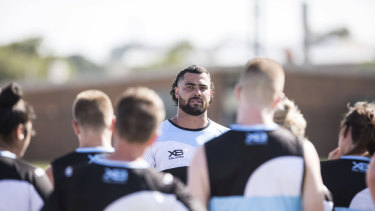 "If the opportunity came I would take it with both hands but if not, I would like to see Will Chambers in the role.

"He has some good morals behind his story and is someone I look up to."

Meanwhile, the star Cronulla prop doesn't believe the off field distractions at the Sharks will have any bearing on their 2019 campaign.

"We have been blocking out the outside noise and being ourselves and we’ve been doing that from day dot," he said.

"For us, as individuals, and as players, we just unite.

Cronulla aside, Fifita's source of pride when speaking on Wednesday was irrefutable.

He is a proud representative of the Indigenous-Pasifika cultures in which he was raised and that's why he has called for Friday's fixture to not only be an annual event, but to be expanded upon in the years to come.

"It’s big for New Zealand’s Indigenous people and it’s going to be big for us as well," he said.

"It’s all about culture, all about giving back; wearing that jersey and representing."