The Brexiteer billionaire who wants to buy United from the Glazers: How Sir Jim Ratcliffe went from growing up in a council house to Britain’s richest man worth £10.9bn – and already owns football clubs in France and Switzerland

Sir Jim Ratcliffe has revealed his interest in launching a takeover bid for Manchester United if it comes up for sale, in what would be one of the most audacious moves yet for Britain’s richest man.

Sir Jim, the 69-year-old founder and boss of chemical giant Ineos, is a Brexit-supporting football obsessive who recently attracted controversy for his decision to abandon Britain for the tax haven of Monaco.

The tycoon, who has an estimated net worth of £10.9billion, bought French club Nice for £91m in 2019 two years after purchasing Swiss team FC Lausanne-Sport.

He wants to buy Manchester United outright, having recently failed with a bid to buy Chelsea. ‘If the club is for sale, Jim is definitely a potential buyer,’ his spokesman told The Times.

Yet he faces an uphill battle. United’s hated owners Avram and Joel Glazer are not believed to have any plans to cede control of the club any time soon, while they recently entered exclusive talks with US private equity firm Apollo to offload a small stake.

Born in 1952, Sir Jim grew up in a council house on Dunkerley Avenue in Failsworth, a small town between Manchester and Oldham, before attending Beverley Grammar School when his family moved to Yorkshire.

On his first day at the University of Birmingham, he was embarrassed to see he was nearly at the bottom of a list of 99 undergraduates ranked by their A-level results, but went on to achieve a 2:1 in chemical engineering.

He worked for BP during a summer holiday after graduating and was offered a job. But he was fired after just three days because his boss had seen his medical report and wasn’t keen on him working there with mild eczema.

Sir Jim went on to work as a trainee accountant at a pharmaceuticals company before moving to Esso then Courtaulds. In 1992 he mortgaged his house to buy BP’s chemicals division for about £40 million.

He only started his first business weeks before his 40th birthday and founded Ineos aged 45 in 1998. During the next 20 years he transformed it into the world’s fourth largest chemicals company, with annual revenues of £45bn. 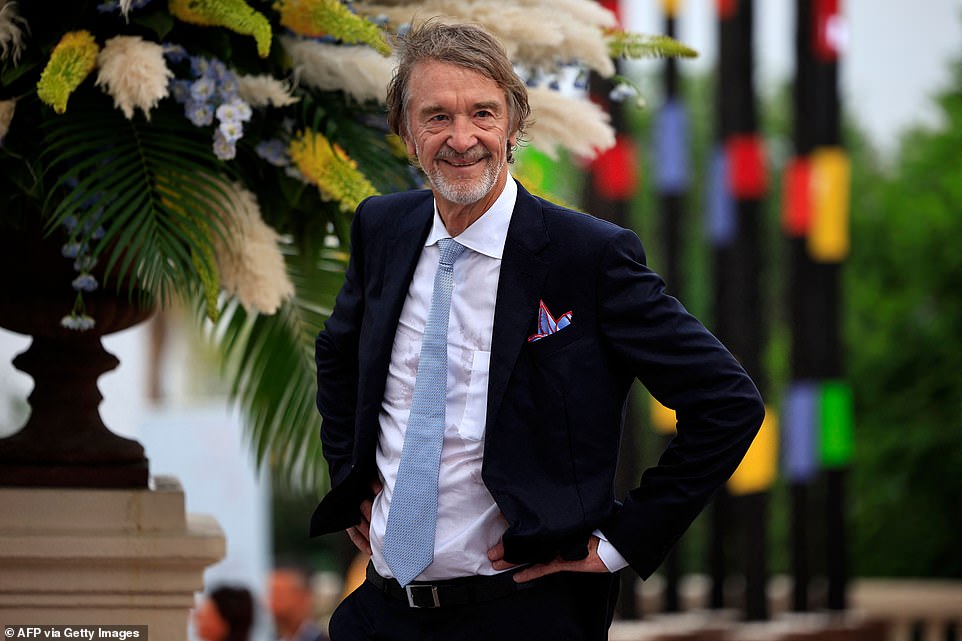 Sir Jim, the 69-year-old founder and boss of chemical giant Ineos, is a Brexit-supporting football obsessive who recently attracted controversy for his decision to abandon Britain for the tax haven of Monaco 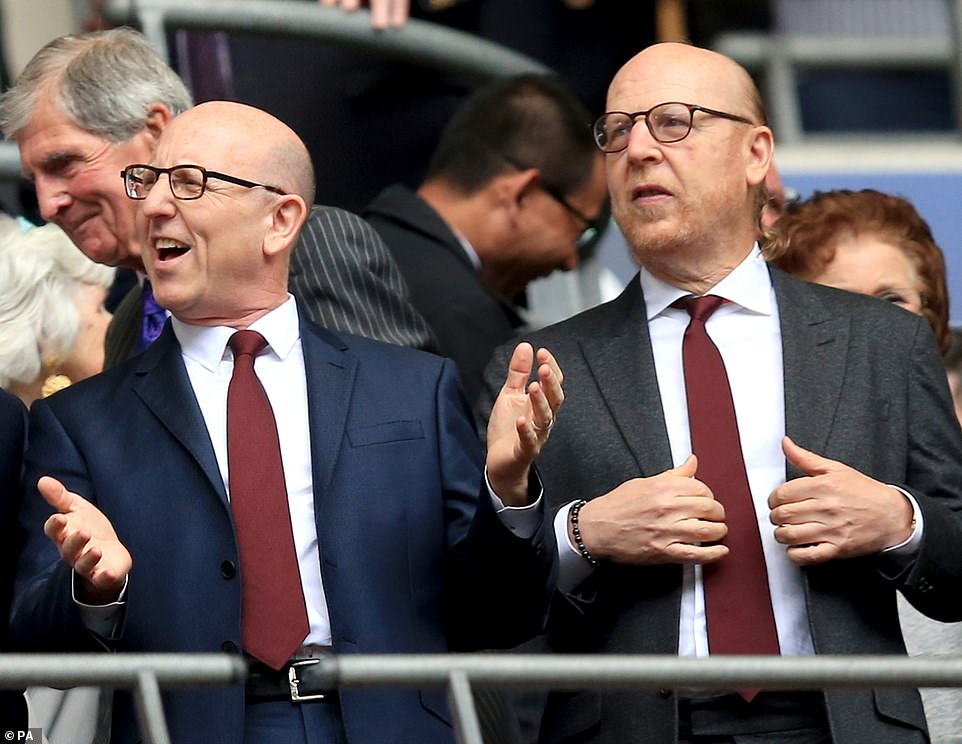 Sir Jim faces an uphill battle to buy United, with its hated owners Joel (left) and Avram (right) Glazer are not believed to have any plans to cede control of the club any time soon

Sir Jim is a lifelong Manchester United fan, although he also has a season ticket at Chelsea.

He recently said: ‘I am a season ticket holder at Chelsea, have been for years, although I’m a Manchester United fan really. Or was!’

In 2020, he was slammed for following a raft of rich Britons including Topshop boss Phillip Green and his wife Tina in relocating from the UK to Monaco where he is expected to save an estimated £4billion in tax.

People who live in Monaco for at least 183 days a year do not pay any income or property taxes. In the UK, meanwhile, the highest tax rate is 45% on income above £150,000-a-year.

Sir Jim was the UK’s third highest individual taxpayer and forked out £110million in 2017-18, according to the Sunday Times tax list.

The move came soon after he was knighted by the Queen for ‘services to business and investment’.

The businessman also came under fire when it emerged he had furloughed almost 800 members of staff from his luxury hotel groups. 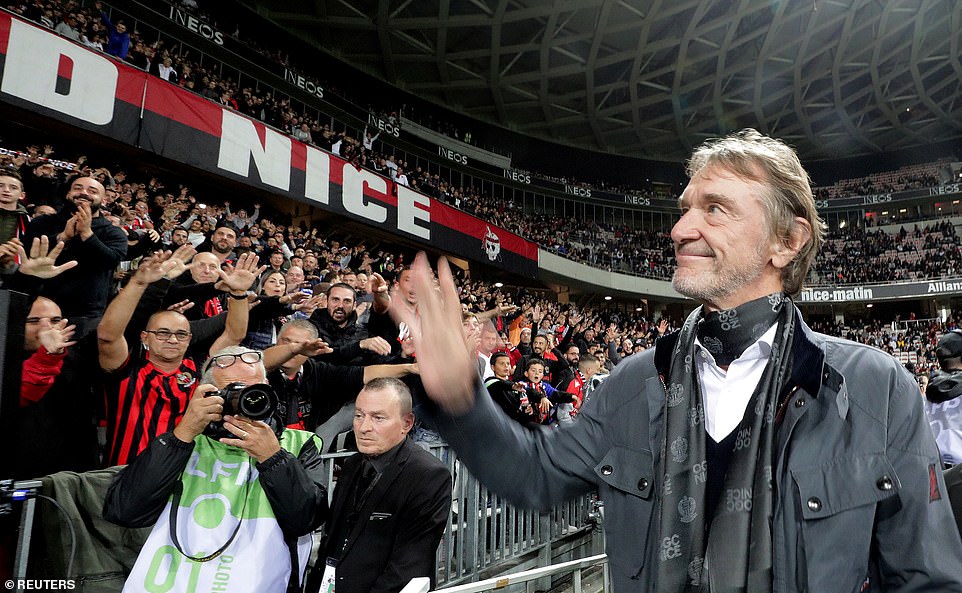 The tycoon, who has an estimated net worth of £10.9billion, bought French club Nice for £91m 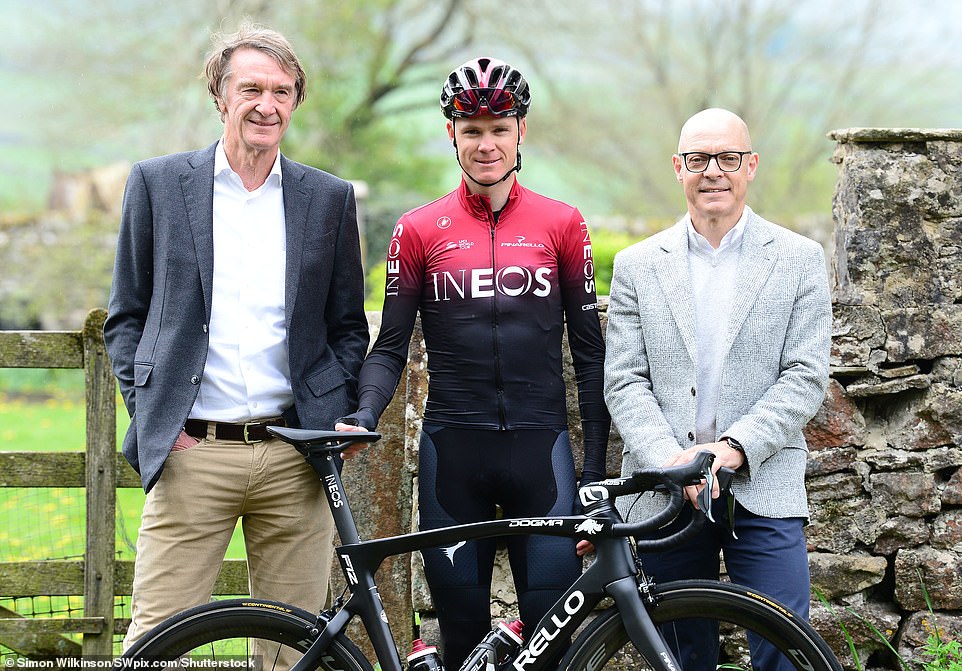 Sir Jim Ratcliffe has widespread investments in sport, including in Team Sky (he is pictured on the left with Chris Froome and Sir David Brailsford)

The pair, who have two sons, divorced in 1995. He has a daughter with his second wife Alicia. Cutting a svelte figure, he does distance running and triathlons to keep himself in shape.

Earlier this year the businessman tried to purchase Chelsea but saw his late bid turned down as current owner Todd Boehly and his consortium took ownership of the London club.

Ratcliffe tabled a last-minute £4.25billion offer to purchase the Stamford Bridge side in May but now aims to become Manchester United owner after registering his interest.

The billionaire has been outspoken in his belief that Man Utd has lost its way, and in 2019 slammed the club for its ‘shockingly poor’ managerial selections and spending ‘dumb money’ on ‘players like Fred’. 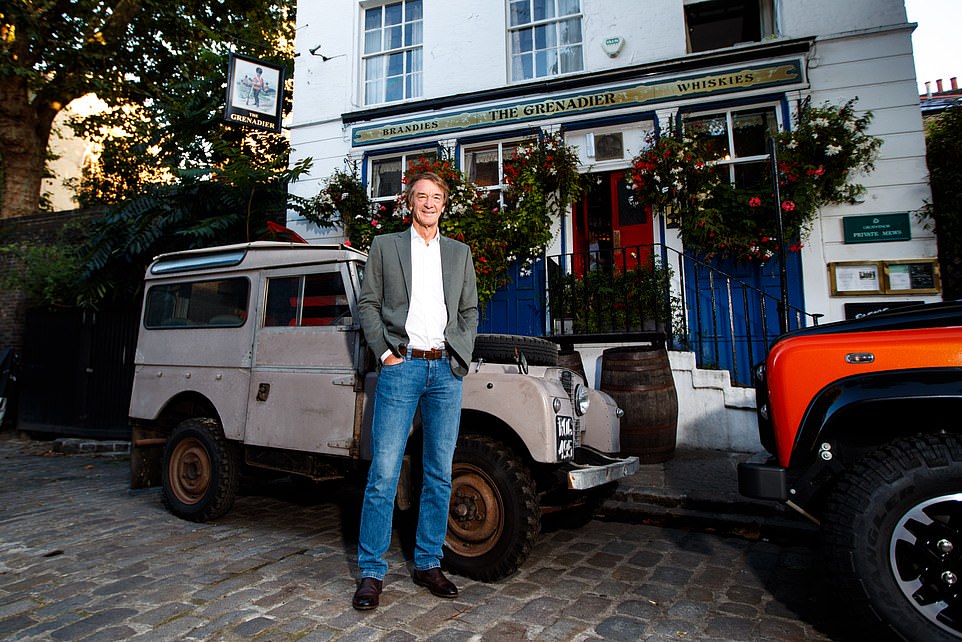 He is pictured outside the Grenadier Pub in London, where he came up with plans for a new 4×4 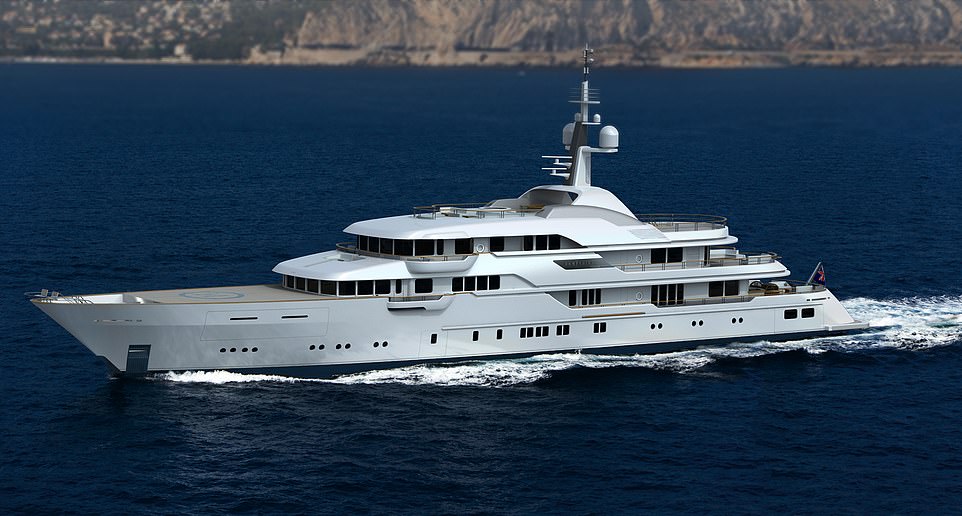 Sir Jim’s £130million superyacht, the Hampshire II. His company, Ineos, is one of the largest petrochemical firms in the world

Sir Jim has repeatedly been linked with Chelsea, but identified the club’s Stamford Bridge stadium as a major issue for any potential owner.

‘There was some early exchange but we were a significant way apart on valuations,’ Ratcliffe told BBC Five Live.

‘The issue with Chelsea is its stadium. We are all getting older and it is a decade of your life to resolve that.’

And he explained to The Times in 2019: ‘Even though clubs have those valuations today, nobody has ever paid those amounts of money.

‘How much did Abramovich pay for Chelsea, £100 million? The Glazers, what £500 million? You can say it’s worth three, four billion but no one has ever paid those sums.

‘Ineos has always tried to take a sensible approach. We don’t like squandering money or we wouldn’t be where we are today. It’s part of our DNA, trying to spend sensibly.’ 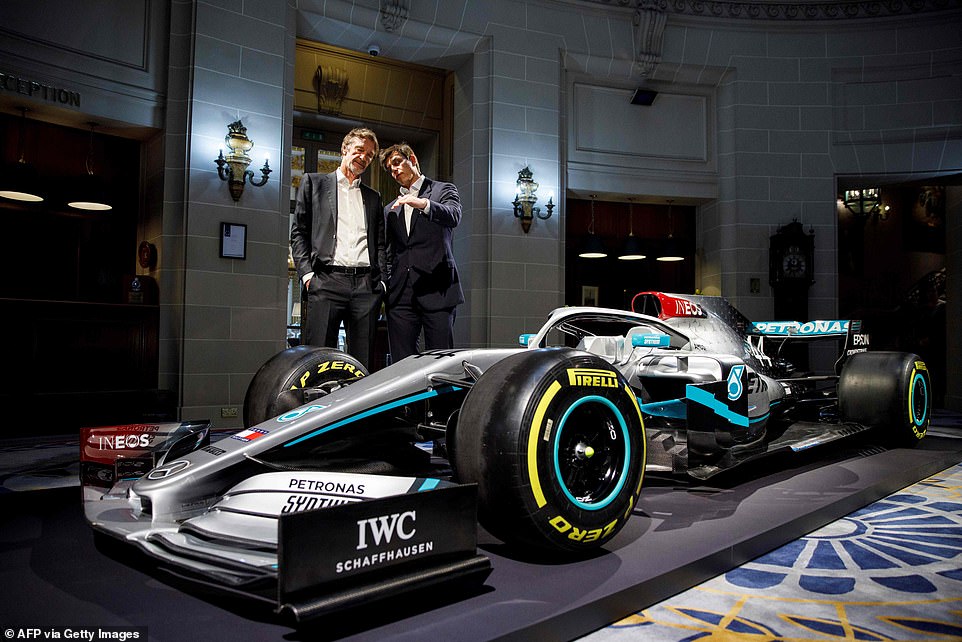