For the first time in a decade, all the finalists for the Heisman Trophy are quarterbacks.

They all play the same way, too. Ohio State’s Dwayne Haskins, Oklahoma’s Kyler Murray and Alabama’s Tua Tagovailoa are all relatively mobile but are nonetheless steadfastly pass-first quarterbacks.

And, of course, all had tremendous success this season, compiling astounding statistics and leading their teams to conference championships. Murray and Tagovailoa, who are widely considered the two top contenders in the closest Heisman race in years, took their teams to the College Football Playoff.

But there is at least one sense in which all three athletes, one of whom will hoist the bronze statue Saturday night, are distinct from the others — an aspect that close watchers of the Heisman balloting process know can have an outsize impact.

In a low-fat version of the Electoral College, the media members who compose the vast majority of Heisman voters are apportioned equally among six regions of the country. Each area — such as the Far West, the Northeast and the Mid-Atlantic — is allotted 145 media votes.

This year, each finalist’s team is based in a different region. Alabama is in the South, Ohio State in the Midwest and Oklahoma in the Southwest, making it a perfect test case for whether regional bias affects Heisman voting. The historical data, deeply explored both in academic papers and in sports debates everywhere, is clear: Indeed, it does. But not in all the ways you may think.

“Results show Heisman finalists do receive higher vote tallies in their home regions on average,” concludes a paper, “The Nature of Regional Bias in Heisman Voting,” by Nolan Kopkin, a professor of African and African Disaspora Studies at the University of Wisconsin-Milwaukee. Kopkin said in an interview that he first thought of the paper while studying economics under the Cornell sports economist Lawrence Kahn.

Heisman voters may select players for first (three points) second (two) and third place (one). The winner is the top points-getter. There are 870 total media voters, plus the 58 votes of former Heisman winners and one public vote. How many players are considered finalists is determined by how close the final vote totals are. “Where major gaps exist, that’s where you get a cutoff, ” according to the website of the Heisman Trophy Trust, which administers the award.

Kopkin’s paper, published this year in the Journal of Sports Analytics, studied the Heisman vote tallies between 1990 and 2016, and used equations to control for different variables and across seasons when there were different numbers of finalists.

According to the study, Heisman finalists received substantial boosts from their own regions. Compared to his overall tally, the average finalist over that period received 42.9 extra points from his region. He also received 4.9 points more for every game played in a given region, including those outside his home region. And finalists lost small but statistically significant numbers of points from regions that had their own home finalists.

The Heisman system does try to protect players from this bias.

For one thing, within regions, states receive a number of votes approximately commensurate with their populations. California and Hawaii must split the Far West’s votes, but California gets more (there are presently no voters from Alaska).

For another, the regions are roughly equivalent: Five of the six contain between 53.8 million and 65.5 million people, per U.S. Census Bureau population estimates from last year, and between 21 and 31 teams in the Football Bowl Subdivision.

“It’s a national collegiate award, so we’re always concerned to make sure we have the best electorate we can,” said Tim Henning, a spokesman for the Trust.

If any region could claim to be disadvantaged by this process, it might be the Far West, which is the most populous, or the South, which has the most F.B.S. teams (31). There has long been a perception that players from teams on the West Coast that are not the Southern California Trojans have a longer shot at winning.

“People from the West always complain theirs are not receiving enough respect nationally,” Kopkin said. “The data basically doesn’t bear that out.” 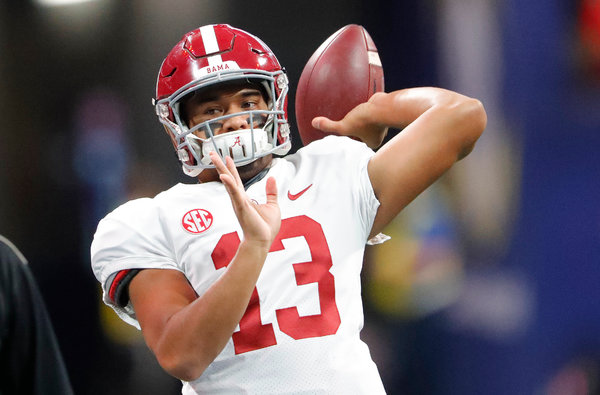 Rather, he said, finalists from the Northeast, Southwest and South on average received fewer points from other regions’ voters than might otherwise be expected.

But that hurdle is not insurmountable. Ten of the past 11 winners played for teams in the South or Southwest. And ultimately, since everyone is from somewhere, regional bias in Heisman voting should cancel itself out — particularly in a year, like this one, when the top points-getters are from different regions.

In contrast, Kopkin saw regional bias have a more decisive influence in, say, 1993, when the top three points-getters all hailed from the South. The overall victor, Florida State quarterback Charlie Ward, actually lost his own region to runners-up from Alabama and Tennessee. He stacked his points in other regions, Kopkin speculates, partly thanks to Florida State’s membership in the predominantly Mid-Atlantic Atlantic Coast Conference and the Seminoles’ prodigious number of nationally televised games.

If there is a bellwether region, meanwhile, it is the Northeast, which is New England and New York. It contains just 34.6 million people and only six F.B.S. members (and merely two teams in the so-called Power 5 conferences). Since it rarely produces a finalist, it is theoretically freed from regional bias and therefore more likely to reflect the national dispensation.

“Because of the low representation, the Northeast region tends to mirror the overall Heisman voting results,” said Daniel P. Heard, a quantitative risk analyst who began tracking Heisman voting patterns while studying statistics at Duke, in an email.

Every year but one since 1998, Heard said, the eventual Heisman winner also won the Northeast. The exception was 2003, when wide receiver Larry Fitzgerald of Pitt — then of the Big East, whose members included several Northeast programs — received more points in the Northeast than the overall winner Jason White, Oklahoma’s quarterback.

If the Northeast is something of an accidental kingmaker, that may be appropriate for the region in which the Heisman originated and is still handed out.

“This is New York City’s chance to shine in college football,” said Dick “Hoops” Weiss, who previously wrote for the New York Daily News and is the Mid-Atlantic regional representative.

There is a final twist: Regional bias is diminishing. Kopkin credits the sharp increase in the number of games that are nationally televised.

“You tried to get a consensus of thinking, to make sure everybody was getting a fair shot,” he said.

But we are long past the days when the N.C.A.A. restricted teams to just a couple nationally televised games per season. We are now in an era when three (and soon four) conferences have their own networks, and ESPN and its affiliates can be relied upon to show games on several weeknights as well as for 12 hours on Saturdays. Replays are available for Easterners loathe to stay up late to watch West Coast games.

“The voter now who claims he didn’t see someone — he should have seen someone,” Campbell said.

So as we approach a blissful future in which every single college football game is broadcast to every television set, or laptop, or brain-implanted moving-picture device in the country, might regional bias fade away entirely?

Maybe not. Kopkin’s data showed a sharp decline in bias in recent years — but not its wholesale elimination.

“That’s still not what we see,” Kopkin said. “I don’t think we ever will. You’re still going to see voters in the South being more prone to vote for S.E.C. players.”