Superb spin bowling and supreme six hitting, it was as simple as that for Oval Invincibles as they beat London Spirit in a topsy-turvy clash in The Hundred…

Laurie Evans and Will Jacks thumped Oval Invincibles to a thrilling victory over London Spirit to keep their hopes of a top-three finish in The Hundred alive going into the final round of group games.

Spirit captain Eoin Morgan chose to bat first at the toss and, after a solid start from Joe Denly (35 from 35 balls) and Adam Rossington (28 from 20), it was the skipper himself who really helped push the visitors up to a competitive total as he hammered five sixes in a blistering knock of 41 from 20 balls.

However, after hitting Tabraiz Shamsi (3-25) for back-to-back maximums, he fell next ball trying to hit another and the South African left-arm wrist spinner followed up by bowling a bemused Ravi Bopara with a beauty.

What an innings from Laurie Evans under pressure, he takes #OvalInvincibles 🟢 to victory in a must-win game!#LondonSpirit 🔵 | #TheHundred 💯

Roelof van der Merwe added a quickfire 20 not out to take the Spirit up to 146 from their 100 balls and then struck with his first ball to remove Jason Roy (6 from 6) before ousting Sunil Narine (4 from 2) with his third.

The Invincibles slumped to 52-4 from 38 balls but some incredible hitting from Jacks (44 from 26) and Evans (67no from 37) got them right back into the contest.

Spirit came back well to set up a tense finale but Evans seemed nerveless and sealed the win with his fourth six of the innings, with five balls to spare. 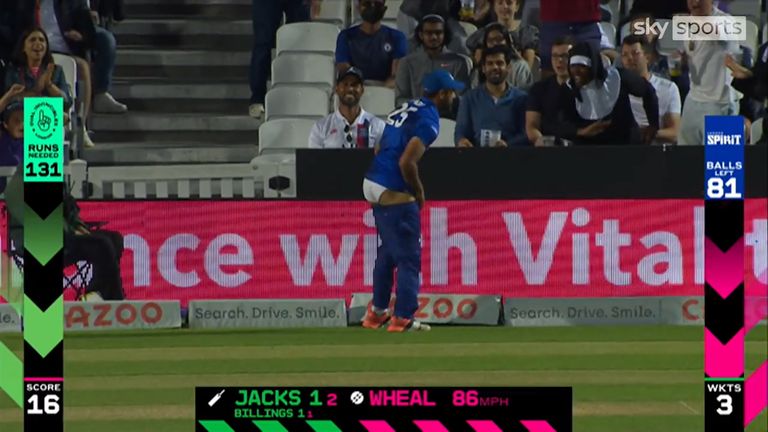 A match-winning 67 from 37 balls saw Laurie Evans named Cazoo Hero of the Match. It was not just the number of runs or even how quickly he scored them that caught the eye though, but the style.

In an era where so many batters heave the ball legside when trying to clear the ropes – and Evans can certainly do that too – the 33-year-old right-hander provides a refreshing change with his preference to hit over the offside, especially given the unfathomable combination of brutality and elegance with which he does it.

A gorgeous shot from the #OvalInvincibles 🟢 batter and the home side now need 70 from 50 balls to win.#LondonSpirit 🔵 | #TheHundred 💯

Two shots in the space of three balls, in particular, exemplified it. On both occasions he advanced to Van der Merwe and just seemed to stroke the ball over extra cover – and yet, each time, the ball just kept going and sailed over the ropes.

It was a more brute-force approach that sealed the win for the Invincibles, a full toss muscled high over long on, but it was certainly an innings to remember from Evans.

It has been a disappointing tournament for London Spirit, their hopes of reaching the play-off stage came to an end some time ago. It has also been a struggle for their skipper, Eoin Morgan, although his lack of form with the bat preceded the start of The Hundred.

His return to form at the Kia Oval then was a welcome one. It may be too late to make much of a difference for the Spirit this year but with the T20 World Cup fast approaching, England fans would certainly have enjoyed seeing the experienced left-hander clearing the ropes with such ease again.

The England captain slaps Will Jacks high over the legside for a towering six! #LondonSpirit 🔵are just starting to motor…#OvalInvincibles 🟢| #TheHundred 💯
📺 Watch 👉 https://t.co/bT0CP9Q8No
📋 Scorecard 👉 https://t.co/T472Md7uAW pic.twitter.com/tdAeeiQKnz

Often commentators will say that just one shot can be all it takes for a batter to get back into nick, so Morgan’s five big, big sixes were overkill if anything! It was not enough for his team tonight but the signs are positive as the countdown to the UAE in October begins. 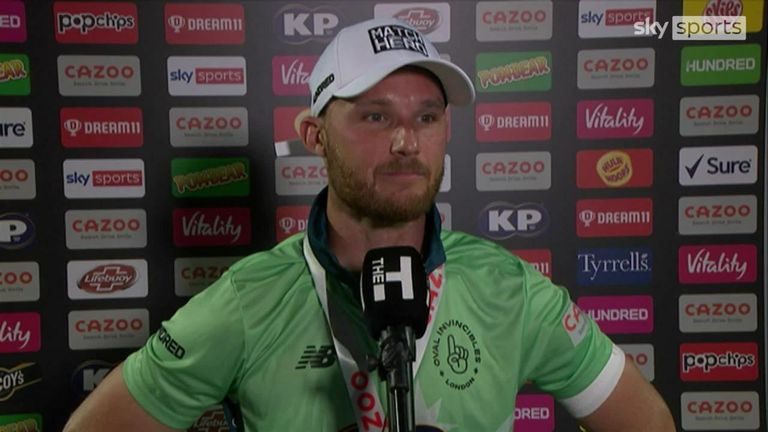 London Spirit captain Eoin Morgan: “I thought we set an around-par score and knew we would have to bowl well to defend it. I thought we bowled really well getting early wickets and were right in the game but we fell short.

“Laurie Evans played as good as I’ve seen him play against a really good bowling line-up. There is an advantage to knowing what you need to get and I thought he paced his innings really well.

“He is clearly a good cricketer and been involved in the England set-up and has been hungry to play, but has lacked an opportunity.

“I’m happy with how I came out but I would liked to have got a few more considering how I was striking it. I’ve had a slow start to the competition and it has been disappointing. As a senior player you want to score early runs in the tournament and contribute more to wins and I haven’t done that.”

It’s another double-header on Sunday as Trent Rockets face Manchester Originals at Trent Bridge. The Rockets need wins in both the men’s and women’s competitions as they push to try and reach the Eliminator. Watch from 3pm on Sky Sports Mix.