Brad Wheal was the star of the show as London Spirit secured their first win of The Hundred at the sixth time of asking, holding on to beat Manchester Originals by six runs at Emirates Old Trafford.

Hampshire and Scotland seamer Wheal, in his first appearance of the tournament, returned fine figures of 4-17 from his 20 deliveries – two of those wickets coming in his final five as the Spirit successfully defended 142.

The Originals had appeared on course to deny the Spirit yet again as Colin Ackermann (53 off 40 balls) fired fifty and Carlos Brathwaite smashed a 19-ball 30.

Carlos Brathwaite rolls back the years to that 2016 T20 World Cup final as he launches a huge six over cow corner!

With those two at the crease, the home side required a more than manageable 17 runs from the final 12 deliveries, but Wheal picked up Ackermann with the next delivery, and although Brathwaite blasted Blake Cullen for one of his three sixes in the next set of five, the bowler got his revenge by having him caught out at deep cover.

Manchester’s chase fell away thereafter, with Wheal mopping up the tail and taking two more wickets either side of a run-out. 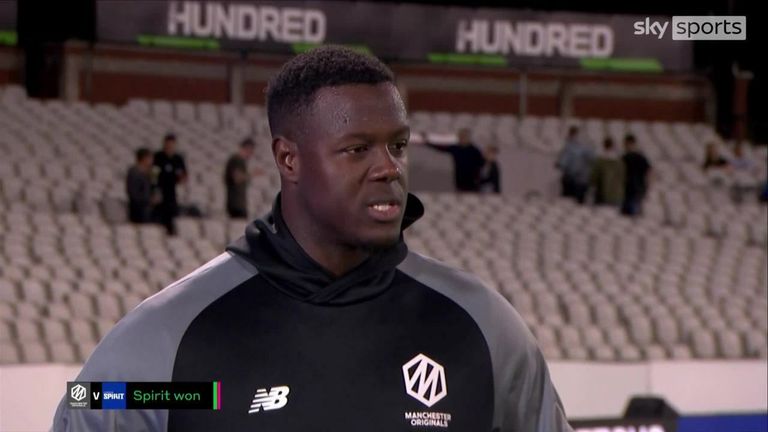 Wheal. What a debut for the 24-year-old Scotsman! He, combined with a double-strike from Mohammad Nabi (2-19), helped set the tone early on in the Originals innings.

Wheal picked up the dangerous Phil Salt for 14 as the hosts stumbled their way to 21-3 inside the opening 16 balls of their run chase.

"Salt has been knocked over by a Saltire!" 🏴󠁧󠁢󠁳󠁣󠁴󠁿😂👏@markbutcher72, like Brad Wheal with this delivery, on fire tonight! 🔥🔥

Ackermann and Brathwaite, as well as a useful 27 from Tom Lammonby, got the Originals’ reply back on track and they looked to be on their way to ‘hero’ status, only to be denied by some brilliant bowling at the death from the Spirit.

Spin was again a consistent threat on a used Old Trafford surface. There was Nabi’s double for the Spirit, plus leg-spinner Mason Crane found considerable turn throughout as he returned figures of 1-25 from his 20.

As for the Originals, fellow leggy Matt Parkinson claimed 2-18, while slow-left-armer Tom Hartley went one better with 3-27, including the scalp of top-scorer Adam Rossington (46 off 29).

Matt Parkinson is "running round like someone has set his trousers on fire!" @markbutcher72 😂👏

Adam Rossington falls for 46 – what a catch that was! #TheHundred 💯

But it was actually Parkinson’s part in that dismissal of Rossington that produced the standout moment of the night, as he pulled off a stunning, leaping one-handed catch from short third-man – then proceeding to go on a tear round the outfield, à la Imran Tahir, in celebration!

Spirit hero of the match, Brad Wheal: “It has been a long time coming for the boys, but it was nice to get over the line and nice for me to pick up a few wickets along the way at crucial times. 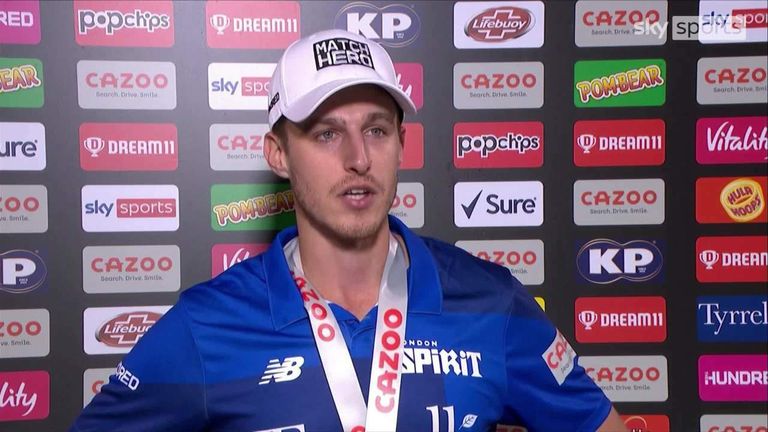 “It has been tough sitting on the sidelines. You feel you lose touch a bit not playing for a while. I’ve tried to keep going in training and do the right things.

“The boys want to show what we can do – entertain the crowds and have some fun.”

We are heading down south to the Ageas Bowl for Wednesday’s double-header, as Southern Brave and Welsh Fire meet, with both matches live on Sky Sports Cricket, Sky Sports Mix and Sky Sports Main Event from 2.30pm and 6pm respectively.

The women’s game will also be available to stream via the Sky Sports Cricket YouTube channel, with the table-topping Brave taking on the seventh-placed Fire, who simply must win.

The Fire’s men’s squad are also struggling down in seventh spot in need of a win, while the Brave – currently in fourth – could leap to the top of the table with victory.