After battling Mother Nature on Moving Day, the race for this year's green jacket sees the field chasing Hideki Matsuyama, the first Japanese golfer to lead after any round of the Masters.

The Day 3 pairing of Matsuyama and Xander Schauffele soared up the leaderboard Saturday with rounds of 7-under and 4-under, respectively. Matsuyama surpassed 36-hole leader Justin Rose to end the day four strokes ahead of the field.

Rose's lead has been washed away, but he remains within striking distance, tied with Schauffele, Will Zalatoris and Marc Leishman at 7-under for the tournament, four strokes behind Matsuyama.

Here's everything you need to know for Day 4 at Augusta National:

How to watch on TV

CBS will broadcast live coverage of the final round from 2-7 p.m. ET on Sunday.

The expected forecast calls for partially sunny skies during the morning and early afternoon with humidity around 70% and temperatures in the mid-70s. Later in the day, there's a 40% chance of thunderstorms with winds gusting 10 to 15 mph.

THE LEADER: Hideki Matsuyama roars to front of field after weather delay (and a little cellphone gaming).

SPIETH IN THE HUNT: Can 2015 Masters champ deliver a magical final round?

ACES: All the holes-in-one at the Masters.

GOLFWEEK: Complete coverage of the Masters. 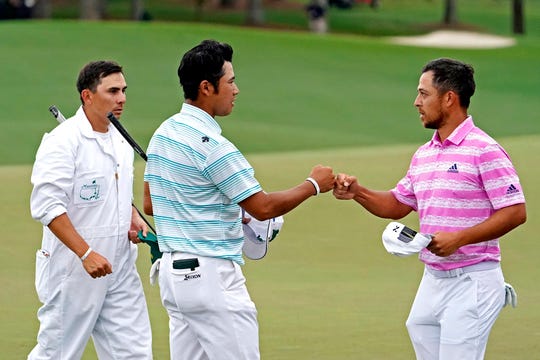 Hideki Matsuyama and Xander Schauffele fist-bump on the 18th green after completing their round Saturday at the Masters. (Photo: Rob Schumacher, USA TODAY Sports)