AUGUSTA, Ga. — As Patrick Reed surveyed his second shot, he seemed to have a dozen worries on his mind.

Which way was the wind blowing? Where on the green should he land his ball? Would the fans in his peripheral vision stop moving?

In a sport where the ball is still and the mind is active, and where distractions from unruly fans, bad bounces or sudden gusts of wind abound, focus can be difficult to maintain. But during the first round of the 2018 Tour Championship in Atlanta, it became nearly impossible. Reed took one last look at his target and what he saw nearly made his head go haywire.

Why was his estranged father standing behind the green?

No one on the PGA Tour these days has his powers of concentration tested as much as Reed, whose sometimes brash personality generates intense reaction among his peers and the public alike. For every person like the two-time major winner Curtis Strange, who said that he admires Reed’s self-belief, there are dozens who will never forgive him for proclaiming himself “a top-five player in the world” when he was 23 years old and ranked No. 20.

Yet easily the worst distraction that Reed faces any week, but especially this one, when he will defend the Masters title he won last year, is the possibility that at any moment he will look up and come face-to-face with the most painful chapter of his life. 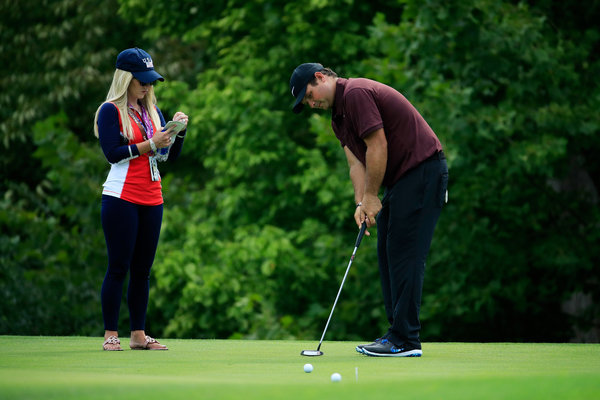 Reed’s parents live six miles from Augusta National Golf Club, in a two-story, Southern-style Colonial replete with a bedroom shrine to their first child and only son, who hasn’t stepped foot in the house since 2012. This week should be a joyous homecoming for Reed, who led Augusta State (now Augusta University) to back-to-back national championships and will preside over Tuesday’s legends-laden Champions dinner. But instead it has all the makings of a nightmare, with his acrimonious relationship with his family threatening to become as much a part of this year’s Masters narrative as his attempt to become the first golfer since Tiger Woods in 2002 to successfully defend his title.

“I wouldn’t at all be surprised if they show up,” Reed said.

Reed, 28, has steadfastly declined to speak publicly about the reasons for the family schism. In a Sports Illustrated story in 2015, Reed’s mother insinuated that the rift resulted from Reed’s marriage, at age 22, to the former Justine Karain, against the advice of his parents who worried that he was too young.

Reed’s parents were not invited to last year’s Masters, when their son held off a challenge from Rickie Fowler and Jordan Spieth down the stretch, just as they were not invited to his 2012 wedding. They have not met either of his two young children. To attend this week’s tournament, they will have to enter the grounds with badges they did not obtain from him.

Last year the drama was confined to the course, but in the year since, Reed said he knew of two occasions in which his father and younger sister, Hannah, followed him at golf tournaments. Their motivation remains a mystery. When contacted for this article, Reed’s parents politely declined to comment. In an email, Reed’s mother replied, “At this time we have no comment on this subject and we hope you will respect the privacy of Hannah, Bill and myself.”

Faces in the Crowd

Danny Coulson, a former deputy assistant director of the F.B.I. who directs the P.G.A. Tour’s security, saw Reed’s father at the first of the two events where Reed also noticed him, last September’s Tour Championship at Atlanta’s East Lake Golf Club. Coulson said he had cordially explained to Bill Reed what he and his staff have expressed over the years to Patrick: If Reed’s father wishes to watch golf, he is free to do so unless he does or says anything that would warrant his ejection.

Reed had other guests at the Tour Championship. He is extremely close to the Karains. One of Justine’s brothers, Kessler Karain, is his caddie and another of her brothers, Dan Karain, was visiting from Texas to lend his support. Justine stayed home in Houston that week, but from his spot in the gallery, Dan Karain was the first to recognize Reed’s father and sister behind East Lake’s fifth green as Reed was preparing to hit.

Reed said afterward that he wasn’t aware that his father and sister were there until the par-4 17th hole, when he was sizing up his approach shot and he noticed them standing along the rope line behind the green. He said he immediately tried to steer his focus back to golf.

Reed was wild off the tee that day, hitting only six fairways, but later said his problems were strictly self-inflicted. If he had noticed his father and sister on the front nine, he said, “I would have called for security to throw them out.” But those were his emotions boiling over after a round so frustrating that he went straight to the range after signing his scorecard and hit dozens of balls.

The week after the Tour Championship, Reed’s father and sister made the 4,300-mile trek to Paris for the Ryder Cup, where they followed Reed during his Sunday singles victory. Reed never saw them, he said, but members of his inner circle did, and they said they spent the afternoon tracking both Reed’s play and Bill and Hannah’s movements. As the Americans’ upset loss to the Europeans was winding down, only a few people close to Reed knew about the drama unfolding outside the gallery ropes.

Reed acknowledged later that he understands intellectually that if his father, mother or sister wants to watch him play, there is nothing he can do about it.

The Masters spectator’s guide has clear rules for patrons: No cheering a player’s misfortune and no inane or profane outbursts. Any violators are subject to immediate removal. But no rules exist to address a players’ estranged parents following their son.

At the 2014 United States Open in Pinehurst, N.C., Reed’s parents attended the second round using badges they had obtained from friends. Upon spotting them in Reed’s gallery, Reed’s agent expressed concerns to the U.S.G.A. security officers. On Monday, the U.S.G.A., in response to questions from The Times about the incident, said its security officials opted to escort Reed’s parents off the course and confiscate their badges after local law enforcement officers observed Bill Reed making what they described as “intimidating movements” toward Reed’s wife.

“Patrick and Justine Reed had no involvement in this decision,” the U.S.G.A. said.

Phillip B. Costa Jr., the manager and attorney for Team Reed Enterprises, said that Reed has not reached out to Augusta National officials to request any special security this week.

Reed knows his on-course persona makes him a convenient villain. He is the cocky player who speaks his mind and walks the course leading with his chin, the former college delinquent whose underage drinking and other immature behavior, which hastened his departure from Georgia after one year, continues to trail him as a pro.

McIlroy, who lost to Reed in a riveting singles match at the 2016 Ryder Cup and was paired with — and outplayed by — Reed in the final round of last year’s Masters, said: “The negative perception is all from hearsay, it’s all secondhand. I truly believe you can only base and judge someone’s character on how they’ve treated you. And Patrick’s always treated me well.”

McIlroy added, “He’s got a bit of an edge, and I think you need that to be successful out here.”

At a tournament in Germany last year, Reed called out a television crew member for jiggling coins as he was preparing to hit. At a playoff event outside Boston, Reed posed for a selfie at a Red Sox game and posted it to his Twitter feed criticizing his PGA Tour-issued seats — from which he had a crystal-clear view of his peer Justin Thomas, another major winner in his 20s, throwing out the first pitch.

And at the end of last year’s Ryder Cup, Reed even questioned the pairing decisions of Jim Furyk, the American captain.

“Does he ask for a little bit of it?” Dustin Johnson, who was a squad mate of Reed’s in Paris, said in reference to the fans’ vitriol. “Yeah,” said Johnson, who added that he likes Reed. “But I promise you, he doesn’t care what people say.”

Well, maybe a little. The Monday after last year’s Players Championship, Reed spoke with Ross Berlin, the tour’s senior vice president for player relations, on the putting green at the next stop on the schedule. Reed described the heckling he had endured at the tour’s flagship event, which included taunts like, “Everybody hates you, Reed!” Berlin listened intently and took notes.

When Reed was finished, Berlin promised that the tour’s security would do a better job rooting out the unruliest fans. He reminded Reed that he can have fans ejected, and offered as examples two players — McIlroy and Thomas — who have done so.

Reed thanked him but said he couldn’t have anyone ejected from the course. The problem with being golf’s perceived villain is ejecting the bad guy is bound to make things worse, not better. “It’s pretty much a no-win situation,” Reed said.

Can Reed contend this week, given all that he is contending with? What if he arrives on Sunday at the par-3 12th, with its hourglass green, to a swirling south wind lurking behind the trees and his estranged family behind the tee?

“What will I do?” Reed asked rhetorically. “What can I do? Nothing.”