For the N.C.A.A., the easy part — setting a bracket and crowning Baylor, Gonzaga, Illinois and Michigan as the No. 1 seeds for the Division I men’s basketball tournament that will begin this week — ended on Sunday night. Now the association faces a weekslong test of its choice to play its signature event during the coronavirus pandemic.

The decision to pull 68 teams from across the country into a tournament in Indiana will have enormous repercussions for college sports. A successful men’s tournament, as well as a smooth women’s tournament in Texas, would lift the morale and finances of an industry that the pandemic has left in a precarious position. The N.C.A.A. lost nearly $56 million in its most recent fiscal year, primarily because the 2020 men’s tournament was not held.

If the competitions exacerbate the public health crisis or stumble significantly, college sports leaders, already under scrutiny on Capitol Hill and in the courts, will face scrutiny about whether they had prized money more than safety.

“This is going to be complicated and difficult,” Dan Gavitt, the N.C.A.A.’s senior vice president of basketball, said this winter. “There’s no question about that.”

The brackets could still change.

The men’s bracket may be out, but it will not freeze until 6 p.m. Eastern time on Tuesday — an allowance for the possibility that the virus will derail a team’s hopes while giving another a chance to play for a championship.

The rules vary depending on a stricken team’s home conference.

If a team plays in a league that has just one team in the tournament, the conference may choose its substitute. The new team will assume the position in the bracket of the team it replaced.

If a team is from a league that earned multiple tournament bids, four teams — Louisville, Colorado State, St. Louis and Mississippi — will be waiting to replace it in the same bracket spot.

Once the deadline passes on Tuesday, no new teams will be added to the brackets for the men’s or women’s tournaments. (The selections for the 64-team women’s tournament will be announced on Monday night.) If a team does not have at least “five eligible, healthy players to start a game,” as Gavitt put it last week, the game will be classified as a no-contest, moving the opponent to the next round.

These are not ‘bubbles.’

The N.C.A.A.’s plan calls for choke points to limit the pandemic’s risks to players and coaches, but the association’s strategy does not include all of the restrictions that the N.B.A. used last year to finish its season and playoffs in its so-called bubble in Florida.

More than 2,300 people in the travel parties for the 68 teams in the tournament field — players, coaches, trainers and the like — are expected to descend on Indiana for the men’s tournament. But there will also be referees, N.C.A.A. staff members, security guards, cleaning crews, journalists, relatives and fans to fill venues to up to 25 percent of their usual capacity.

Spectators will largely be barred from the first and second rounds of the women’s tournament, which will be played in Texas. Beginning with that tournament’s round of 16, the Alamodome in San Antonio is expected to host no more than about 11,000 spectators.

The most well-guarded participants in the tournaments, including players and coaches, will be required to stay within what the N.C.A.A. has described as a “controlled environment.” Others, even those who may be near the courtside, will not face any such limits, though they will have to wear masks and attempt to remain six feet away from people. 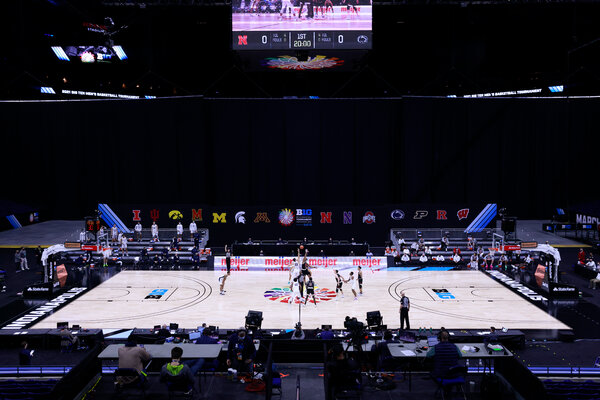 To reduce travel, most men’s tournament games will be played in Indianapolis, where the Bankers Life Fieldhouse, Hinkle Fieldhouse, Indiana Farmers Coliseum and Lucas Oil Stadium will host games. Teams will also play at Mackey Arena, on the campus of Purdue University in West Lafayette, Ind., and Assembly Hall, which is at Indiana University in Bloomington.

Many people — but far from everyone — will be tested daily for the virus.

Tournament organizers have sorted the people who will be in and around the games into four tiers, and testing requirements vary for each.

Referees and members of the teams’ travel parties must test negative for seven straight days before traveling to Indiana and Texas, and they will face daily testing, paid for by the N.C.A.A., until they depart the tournaments. Practices cannot be held until at least two days of tests after a team’s arrival, and people will be asked to remain in their hotel rooms until those initial tests return negative results.

People who may have “periodic interaction” with participants in the top monitoring tier will have to test negative within two days of arrival and will undergo testing each day.

Another group of people working on the tournaments will be tested twice a week after an initial negative result. Spectators and journalists will not have to pass a testing protocol to attend games.

With few exceptions, masks will be mandatory.

Teams will not be able to roam Indianapolis or San Antonio.

Top-tier teams in any sport often refer to game travel as business trips. But while postseason trips ordinarily involve at least some pregame fun — think of the traditional prime rib feast for Rose Bowl teams — teams playing in this year’s tournaments will hardly be wandering the Indianapolis City Market or strolling the River Walk in San Antonio.

For the men’s tournament, teams will stay at hotels that are connected to the Indiana Convention Center, where practices will be held, by skywalks. Teams will have their own floors inside the hotels, and organizers said there would be meeting rooms and dining areas designed to maintain social distancing.

For the women’s tournament in Texas, the N.C.A.A. said, entire hotels will be reserved for people who are tested every day for the virus, including players, coaches and game officials.

No one in that rung at either tournament, officials said, will be allowed out of the restricted zone. Although monitoring devices will be used during team activities to facilitate contact tracing, as warranted, they will not be required at other times, like when players are in their hotel rooms.

A lot of money is at stake.

The men’s basketball tournament is the N.C.A.A.’s principal moneymaker, and the association’s decision to cancel the 2020 event cost it more than $800 million.

Although insurers paid $270 million because the association carried far-reaching event cancellation coverage — policies that are in effect for the 2021 competition — the N.C.A.A.’s total revenues for its fiscal year declined by about $600 million. The N.C.A.A. had planned to distribute $600 million to its Division I leagues last year, but it ultimately paid out less than half of that.