Kevin Loughery and Julius Erving share a city, Atlanta, a golf club and an emotional connection to a basketball allegory told inharmoniously in three distinct parts — what was, what might have been and what now has become.

In other words: the history of the Nets, from Long Island to New Jersey to Brooklyn.

Inevitably, wistfully, Loughery’s conversation with Erving centers on Part 2, the potentially grand Nassau Coliseum stage that was dismantled just before the curtain was to rise on the N.B.A. debut of Erving and the Nets.

“I always talk to him about what we might have done,” Loughery, who coached the developing legend of Dr. J. to two A.B.A. titles and stayed on to guide the remains of the Nets after the financially troubled franchise sold the rights to Erving, the world’s most electrifying player, to the Philadelphia 76ers on the eve of the 1976-77 season.

Loughery added in a telephone interview: “What haunts you is that when we had him in the A.B.A. he was the best he ever was. The last A.B.A. series against Denver, when we won that second title, that was the best series I’ve ever seen anyone play.”

That’s quite a mouthful, coming from an 81-year-old basketball lifer who once shared a backcourt in Baltimore with Earl Monroe and who coached seven pro teams, including one in Chicago that unveiled a rookie named Jordan.

There is also an evolving symmetry to this ancient history. Forty-five years after their infamous selling of the rights to the Doctor, the Nets finally have become what they were poised to be in 1976: the sport’s sexiest team, with an opportunity to be its best. 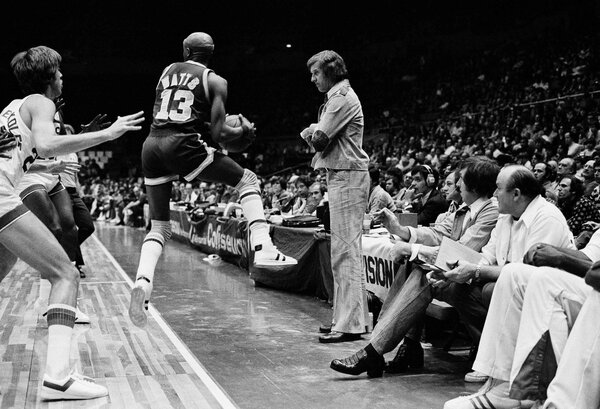 Alas, Brooklyn’s assemblage of a superstar-laden lineup has occurred during a time of fan-less arenas only now welcoming crowds still enfeebled by the menace of Covid-19. Selling out America with Kevin Durant, James Harden and Kyrie Irving for now remains the dream it was for Loughery and Erving.

On the eve of that 1976-77 season, Erving was holding out for a contract upgrade and the league office was holding its breath after scheduling the Nets for a nationally televised opener against Golden State in Oakland. The arena sold out weeks in advance, but the sale of Erving’s rights to Philadelphia two days before the game by the owner Roy Boe — and after the Knicks absurdly let themselves be outbid for a homegrown player who would have altered their history — persuaded CBS to show a late-night movie instead.

Hoping to make a splash, or at least save face, the Nets had acquired Nate Archibald, an explosive, New York-bred guard who was known as Tiny, one month earlier. Archibald had a bigger annual salary than Erving, which stiffened Erving’s resolve, despite his not wishing to leave Long Island, where he’d grown up.

“It’s tough to play Abraham Lincoln and George Washington in the frontcourt,” Loughery memorably told reporters when the news reached California that Erving was gone. He and his players were gutted, even if they came to realize that Boe’s inability to pay millions both for league entry and to the Knicks for territorial rights limited his options to one.

Rod Thorn, who returned to Loughery’s side that season as an assistant after a one-year absence to coach the Spirits of St. Louis, offered a more certain revisionist take.

“History in New York basketball would have been changed,” he said. “We played and won exhibitions against N.B.A. teams. Every building was sold out for Doc. We also would have had a couple years’ window to add more pieces.”

Instead, Archibald played 34 games for the Nets and blew out an Achilles’ tendon. The team moved to Piscataway, N.J., to play in a college gym. Loughery and Thorn shared long drives from their homes on Long Island, epitomizing the detour into a competitive ditch.

The Nets and the 76ers had more peculiar chapters to co-author. Two years later, they played what may have been the weirdest game ever, when the N.B.A. upheld a Nets protest of technical fouls — the referee Richie Powers called three each on Loughery and Bernard King, one more than the limit for ejection.

The game was replayed more than four months later from a point in the third quarter, but before then the teams made a four-player trade. In the final box score of the suspended game — won by the 76ers — three of the players appeared on both sides.

Thorn later made what until further notice remains the most beneficial deal in the Nets’ N.B.A. history. As team president in 2001, he acquired Jason Kidd, who inspired successive runs to the finals. Thorn left New Jersey in 2010, joining the 76ers’ front office, essentially trading places with Billy King.

That put King at the Nets’ helm as they finished out their New Jersey run in April 2012 by hosting, of course, the 76ers.

Now Thorn watches from afar as Sean Marks, who succeeded King with the Nets, plays personnel chess, building on his big three by reeling in the former All-Stars Blake Griffin and LaMarcus Aldridge with the ease of signing escapees of the G League.

Skeptics worry about Durant’s health, Irving’s reliability and their sensitivity to criticism. Loughery has reservations about the perimeter defense of Harden and Irving. But Thorn has come to believe that the Nets will be fine as long as they remain in Harden’s soft hands.

“I’ve changed my opinion of him,” he said. “He dominated the ball so much in Houston, but he’s been a fantastic playmaker for them.”

As fate would have it, the Nets are challenging for Eastern Conference supremacy with the 76ers, along with Milwaukee. On Wednesday, they go to Philadelphia to confront a formidable group coached by a man nicknamed Doc (Rivers). On the Nets’ plus side, their owner, Joseph Tsai, is rich beyond belief. Lincoln and Washington didn’t make the cut.