Another Formula 1 season, another title for Lewis Hamilton and Mercedes. While that is more of the same, this season has been anything but.

After the first 10 grands prix were either canceled or postponed because of the pandemic, Formula 1 worked with the Fédération Internationale de l’Automobile, the sport’s governing body, and the 10 teams to create a 17-race calendar that began on July 5.

“It’s so important for kids out there to hopefully see this,” he said. “Don’t listen to anybody that tells you you can’t achieve something. Dream the impossible and speak it into existence. You’ve got to work for it, chase it, never give up and never doubt yourself.”

Statistically, Hamilton is the greatest driver in Formula 1 history. In addition to his titles, he holds the records for most race victories, pole positions, podium finishes, points finishes and career points.

Hamilton, 35, has also become Formula 1’s leading voice for increasing diversity and equality in the sport.

The killing of George Floyd in May stirred Hamilton to take action. After he complained about Formula 1’s disorganized prerace antiracism message, the F.I.A. set aside a time for the drivers to express themselves starting at the fourth event of the year, the British Grand Prix. Some drivers kneel or bow their heads. Others stand silently.

Hamilton wears a Black Lives Matter T-shirt; the other drivers wear ones reading End Racism. Before the season started, Formula 1 and the F.I.A. started the We Race As One initiative in support of the global fight against the coronavirus and to condemn racism and inequality.

After Hamilton won the title, he talked about his difficult journey to get to Formula 1. “It’s obviously no secret that I’ve really walked this sport alone, the only Black person here,” he said.

“When I was younger, I didn’t have anybody in the sport that looked like me,” Hamilton said. “It was easy to think it’s not possible to get there because nobody of color had ever been there. You don’t see any Black people on TV that are in Formula 1.” 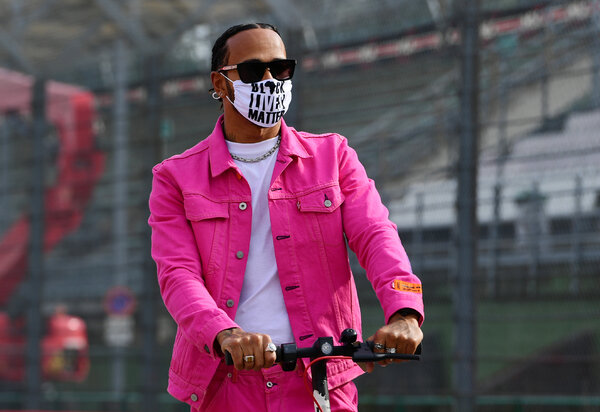 Hamilton was born and raised in England. His paternal grandparents arrived in London from Grenada in 1955.

“If you are looking at places, industries where you don’t see someone of the same background as you, or the same ethnicity as you, or with the same religion, create your own path,” he said.

“That’s what we did. That’s what I’ve been able to do, and it’s been so tough.” he added. “Tough doesn’t even describe how hard it’s been.”

This season, Hamilton has recognized the power of his voice. He has 21 million followers on Instagram and six million on Twitter, and he has used the platforms to spread his diversity messages.

“Because of his large audience he has realized he has a voice, and he wants to utilize his voice to support the topics that are close to his heart, said Toto Wolff, the Mercedes team principal. “I think that is absolutely acceptable.

“He has gained more profile through that. He is obviously polarizing, but that is OK; you would rather polarize and get the message out than be down the middle and too streamlined.”

The topic over who is the best driver in Formula 1 history is still being debated. “It is very difficult to compare the best guys of each period,” Wolff said. “Each had some outstanding drivers.

“It was Juan Manuel Fangio in the 1950s, Ayrton Senna in the 1980s and beginning of the 1990s, then Michael Schumacher, then Sebastian Vettel in the 2010s and now Lewis, all multiple championship winners and with different competitors at the time.”

Before the final race of the season in Abu Dhabi on Sunday, Hamilton has won 11 of the 16 races, and is 127 points ahead of his teammate Valtteri Bottas. Hamilton missed the last race in Bahrain after testing positive for the coronavirus. He returns this weekend.

Bottas won the opening race in Austria from pole position. Hamilton finished second, but a five-second time penalty for causing a collision with the Red Bull driver Alex Albon demoted him to fourth.

Hamilton then won five of the next six races before he had his worst result of the season at the Italian Grand Prix, finishing seventh. He was given a 10-second penalty for changing tires while the pit entry was closed.

More victories followed at Mugello, Italy, and Portimão, Portugal, new circuits added to the schedule this year, and at the Nürburgring in Germany, and in Imola, Italy, venues that had not been on the calendar for years.

In November, Mercedes won the constructors’ title at Imola, and Hamilton won the drivers’ title at Intercity Istanbul Park in Turkey, a race he won, but not without a lot of drama.

A newly laid surface and rain before the race made the circuit treacherous. Early in the race, Hamilton trailed the leader by 25 seconds. As the conditions improved, and the tires on the Mercedes adapted, Hamilton used his skills to win by 31.6 seconds and lapped his teammate Bottas.

Many drivers praised Hamilton for his achievements this season.

“Lewis is one of the best drivers there has been in F1,” said Max Verstappen of Red Bull, who finished third in the drivers’ standings. “There’s no question about that.”

Vettel, a four-time champion who is leaving Ferrari to join Aston Martin next season, said he “could not respect Hamilton’s achievements enough.”

“I’m not his No. 1 fan because my No. 1 is Michael,” he said. “But if you are a fan of the sport you have to be a fan of Lewis, of what he has achieved so far and what he is going to achieve in the future.”

Hamilton was one of three drivers to test positive for the coronavirus along with Racing Point’s Sergio Pérez and Lance Stroll. Other high-profile people infected were the Racing Point team owner Lawrence Stroll and the Pirelli boss Mario Isola.

Chase Carey, who steps down as chief executive of Formula 1 at the end of the year after four seasons in charge, said the season had been challenging, but rewarding.

“Obviously, 2020 did not play out as planned for us or the world and our priorities and goals were turned on their head,” Carey said. “We knew it wasn’t going to be easy to get a season underway.

The sport also experienced a horrific accident involving Romain Grosjean of Haas at the Bahrain Grand Prix. After he hit a barrier, his car split in two and caught fire.

The halo cockpit protection device, introduced in 2018, saved Grosjean’s life. He was burned only on the backs of his hands and sprained his left ankle.

“I saw death coming,” he said in an interview with the French television station TF1. “Without the halo, I would no longer be here.”

Formula 1 has indeed survived a tough season and hopes to have 23 races next year.

“Detailed planning allowed us to start in the safest possible way, and we are very proud of what everyone achieved,” Carey said. “It shows the resilience of all involved in Formula 1.”