Courtney Dauwalter specializes in extremely long races. But her success in winning them has opened a debate about how men’s innate strength advantages apply to endurance sports.

HOMEWOOD, Calif. — At 1:40 in the morning, running through the woods near Lake Tahoe, Courtney Dauwalter began hallucinating.

She saw live puppets playing on a swing set on the side of the trail. Trees and rocks turned into faces. She was on her second night without sleep, 165 miles into a 205-mile race through the mountains, pushing her body to levels considered physically impossible not long ago, and seeing very strange things in the night.

Dauwalter had been on her feet for almost 40 hours and was leading the field of 215 runners as she set her sights on a course record for September’s Tahoe 200, one in a series of very, very long ultramarathons, the latest craze among distance running’s lunatic set. Their hero is Dauwalter, a 33-year old with a reputation for outrunning men and shattering course records. She has won 11 ultramarathons and finished second in seven other endurance races.

This weekend, she will try to break the women’s world record for the most miles run in 24 hours, at the Desert Solstice competition in Phoenix. She will have to run more than 161.55 miles to do so. She already holds the American women’s record, 159.32 miles. This fall, she ran 279.2 miles in what’s known as Big’s Backyard Ultra, a grueling race of attrition during which runners have to complete a 4.16667-mile loop each hour. If they want to put their feet up, eat, go to the bathroom or close their eyes for a few minutes, they have to earn the time by running faster. The last person standing wins.

By the third night of that race, only Dauwalter and Johan Steene remained. After going mile for mile with Steene for 67 hours, Dauwalter conceded. At that point, she and Steene had run 33 miles farther in the race than anyone had before. 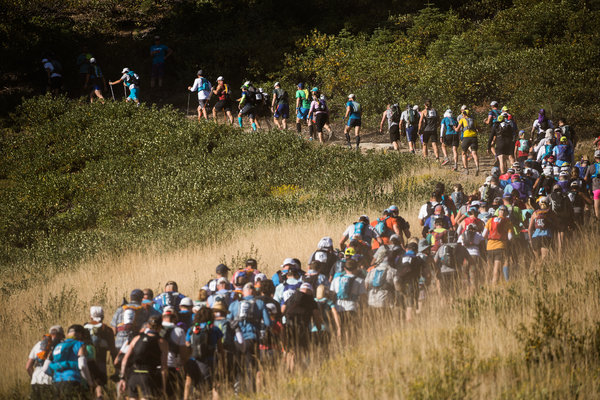 “The race is set up perfectly to test your limits,” said Dauwalter, a former science teacher from Golden, Colo., who wants to achieve 300 miles at Big’s Backyard Ultra next year. “You just go until you reach your own finish line.”

Where exactly that is is anyone’s guess. For now, elite ultrarunning is one of the few sports in which women appear able to hold their own with men. Dauwalter’s prowess has crystallized the debate about whether psychological fortitude can trump men’s innate strength advantages in endurance sports.

This much is clear: As the distance lengthens, the biological advantages that men have grow smaller.

In 2017, Dauwalter won the inaugural Moab 240, a 238-mile race that zigzags along the Colorado River. She completed the route in a little less than 58 hours and beat the next competitor, a man, by 10 hours, or 20 miles. She said a one-minute nap on the side of the trail the second night of the race revived her and pushed her to the finish.

“We know that men are simply bigger and have more muscle mass and are more powerful and faster,” said Heather Heying, an evolutionary biologist. But, she added, “This is about stamina, and stamina is some combination of yes, strength, but also psychological will. It begs the question, is there something going on for women perhaps given our very long evolutionary history as mammals who spent a long time gestating and then giving birth, that gives us a psychological edge in extremely long-term endurance events?”

To the surprise of many in the ultrarunning world, these ridiculously long races are growing in popularity. In 2014, the ultrarunner Candice Burt created the Tahoe 200, the race in which Dauwalter saw the puppets on the swing set. It was the first 200-mile-plus single-loop ultramarathon in the United States. Ninety-one people signed up. The next year, she started the Bigfoot 200, a 206-mile race that traverses the Cascade Mountains in Washington State. In 2017, she added the Moab 240, the race in which Dauwalter obliterated the competition. This year, more than 600 people ran one of the three ultraraces Burt organized.

A faction of ultrarunning has argued that these events are not really a “race.” They say that the 100-plus-hour cutoffs allow less competitive runners time for sleep, and more time is spent hiking than running. Dr. Martin Hoffman, a former researcher for the Western States 100-mile race, said one reason Dauwalter was so successful was there were still so few people competing at 200 miles. According to Ultrarunning magazine, more than 100,000 people worldwide completed a race longer than a marathon (26.2 miles) in 2017.

“If you have the best trained male and female ultrarunners competing against each other, the men will always win,” said Hoffman, who ran his first 100-mile race in 1984. He has spent decades researching ultrarunning, but his work does not cover anything longer than 100 miles.

Heying, the evolutionary biologist, agrees that there is still not enough data to draw conclusions on 200-mile races, but she believes variables like weather, mental strength and innate tolerance for pain help level the field.

Dick Dauwalter, Courtney’s father, who was part of her crew during the Tahoe 200, said she had always been a competitor. The “tiny little squirt” finished eighth in her home state, Minnesota, in cross-country when she was in seventh grade. During the winter, she would get up when it was still dark to Nordic ski before school, which helped turn her into a state champion in cross-country skiing in high school and earned her a scholarship to the University of Denver.

“We did not have a lot money, and it was a lot of work getting the kids to their sports,” Dick Dauwalter said. He makes false teeth and jokes that he's not the athletic one in the family. “The deal was if Courtney or her brothers signed up for something, they had to finish the season even if they did not like the sport.”

A lanky, ponytailed blonde who wears baggy shorts and shirts when she runs, Dauwalter laughs easily and is the opposite of a typically asocial ultrarunner. At Mile 140 of the Tahoe 200, she stopped to give high-fives, sign autographs and talk with girls who had gathered at an aid station to cheer her on. Sometimes during races, she tells jokes to make sure her mind is still working.

She believes that as her threshold for pain increases, so does her ability to run farther.

“I put myself in situations where suffering is going to be involved and hope to be able to tap into the mental piece every time that physical pain becomes too much,” she said. Overwhelmed by pain, she dropped out of her first 100-mile race in 2012. She tried again the next year and finished.

When Dauwalter reached the aid station at Mile 167 of the Tahoe 200, she thanked the volunteers for being up in the middle of the night in freezing temperatures to feed her. She doesn’t keep track of her time when she races, so she asked the group what time it was to figure out how long she had been on her feet.

Even in the dark, fatigue showed on her sunburned face. Her blue eyes were bloodshot from sleeplessness and the dust clouds that kicked up on the trail. For most of the race, she struggled to hold down solid food and used rewetting drops to fight off swelling corneas, a condition that caused her to go blind in a previous race.

Dauwalter did not remove her shoes or change her clothes the entire race, but she did brush her teeth with a tiny toothbrush. She filled her water bottles, packed a half-eaten cheese quesadilla in a plastic baggie, and then headed into the night with her pace runner.

Pacers and the runner’s crew play a critical role in these long races. Dauwalter had three pacers in the Tahoe 200, including her husband, Kevin Schmidt, who organizes logistics for her races and eventually ran with her the last 30 miles in Tahoe.

Ultrarunners often wear heart rate monitors, stay on strict training schedules and adhere to specific diets. Dauwalter runs about 100 miles a week, but does not follow a plan or a specific training schedule. She said she let her body tell her what it needed and felt like doing each day. She eats whatever she wants.

The night before the Tahoe 200, she ate candy corn and pizza. After the race, she ate nachos loaded with cheese and barbecue chicken and drank a lot of beer. At Big’s Backyard Ultra, she ate honey stinger waffles, cheese quesadillas, pierogies and pancakes the first thirty hours of the race, and then opted for McDonald’s double cheeseburgers with extra pickles.

In addition to dehydration, extreme fatigue and hyperthermia, Dauwalter and the other runners who take on these multiday races face encounters with bears, mountain lions, snakes and scorpions. Burt and her team mark the 200-mile courses with pink flags roughly every half-mile, but runners, including Dauwalter, have become lost. For safety, their positions are marked with a GPS spot tracking system.

The coordinates also allow people to follow runners in real time. Hundreds of people followed Dauwalter’s races in Moab and in Tahoe.

“I think more than anything, what we are seeing with Courtney is psychological,” said Steven Kotler, an author and director of research at the Flow Genome Project. “Every time she runs one of these long races, she believes she can do the next one faster.”

She is not invincible, though.

After tracking Dauwalter for two days in Tahoe, Kyle Curtin passed her at Mile 182. Forty-nine hours 54 minutes after starting the Tahoe 200, Dauwalter crossed the finish line in second, twenty-seven minutes behind Curtin. The two set a new course record by almost 10 hours.

“Courtney was definitely the person to beat,” Curtin said. “I ran the time I did because I was trying to catch her the entire race.”

The third-place runner finished 10 hours behind them. Most of the other runners finished a day or two later.

Dauwalter said there was nothing she could do to ward off the puking and the fatigue and Curtin.

“Hopefully now just having experienced those mental and physical components will make it so next time we are just a little bit stronger and can push through them a little bit easier,” she said.

Dauwalter plans to run the Tahoe 200 again. She and Burt, the race director, believe that it’s possible to finish the race in 42 hours.