Tiger Woods was spotted on crutches while in Los Angeles on Wednesday, showing just how well his rehab has progressed since suffering a serious leg injury following a horrific car crash back in February.

Woods, 45, was seen arriving at a hotel in L.A. with girlfriend Erica Herman. The golfing pro appeared to be putting a significant amount of weight on his right leg, which was still covered in a protective sleeve. 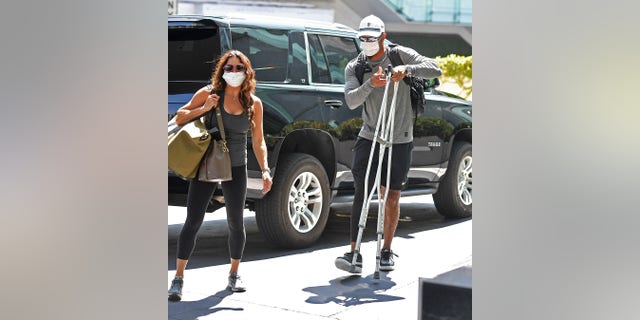 Woods appeared to be putting more weight on his injured right leg.
(BACKGRID)

He had suffered open fractures in his tibia and fibula, injuries to his foot and ankle, and trauma to the muscle and soft tissue of the leg.  A crash report later revealed Woods was also “knocked unconscious, laceration to the lower front jaw, bruised right and left rib cage, fractured right tibia and fibula, possible right ankle injury.”

Woods detailed his recovery in an interview with Golf Digest back in May, calling one of his most “painful” experiences.

“I understand more of the rehab processes because of my past injuries, but this was more painful than anything I have ever experienced.”

No charges were filed in connection to the crash and police say they found no evidence of impairment.