The 18-year-old finished the race in a new world record time of 3 minutes 53.92 seconds in Hangzhou on Friday night. 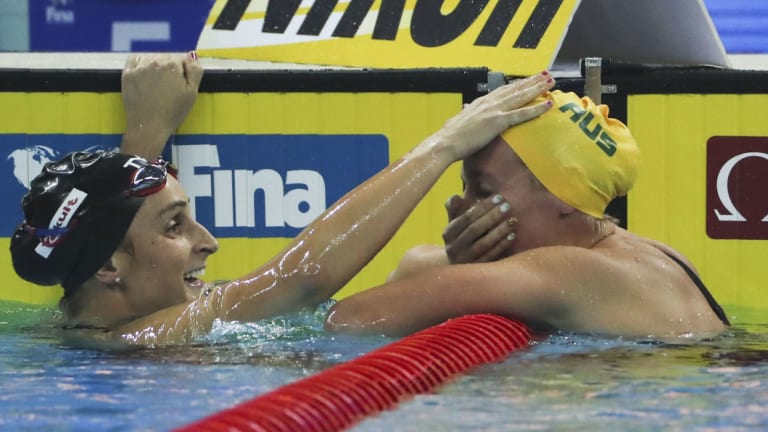 Hard work pays off: A shocked Ariarne Titmus is congratulated by Leah Smith of the US after her 400m freestyle world record swim.Credit:AP

The previous record-holder, China’s Jianjiahe Wang, took the silver with a time of 3:54.56.

Compatriot Li Bingjie completed the podium with a time of 3:57.99.

Titmus, who broke the 200m freestyle short-course world record to win gold on Wednesday, was overwhelmed by her win.

‘‘I am a little bit in shock. I knew the Chinese girl would go out fast and I was worried she would have a little left in the tank at the end, but I held her off,’’ the Australian said after the race.

Titmus became the first woman in 36 years to win the Commonwealth 400m-800m freestyle double at the Gold Coast in April.

After her 200m record swim on Wednesday, Titmus’s coach Dean Boxall said they had been focusing on her speed in the lead up to the six-day event in Hanzhou, held in a 25m short course pool.

Titmus has now proven herself a master of both speed and distance in the pool. 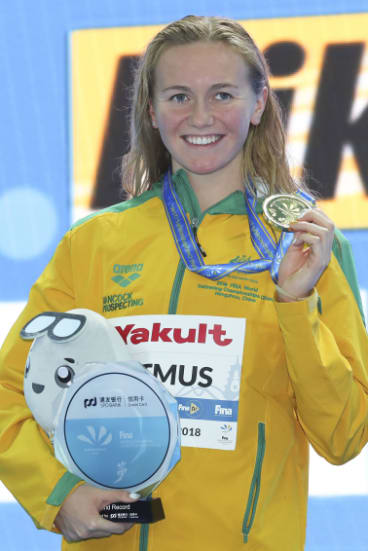 ‘‘I put in a lot of hard work since our trials five weeks ago and the turnaround I have had in that time is unbelievable. I dropped six seconds off my 400 and that shows what training hard can do,’’ she said.

‘‘I can’t believe it, and for it to be a short-course world record is something. I am someone who does not pride themselves on speed, but I will take it.’’

Her gold medal on Friday is the Australian’s second, while compatriot Holly Barratt won silver in the women’s 50m butterfly.

Australia also has three bronzes in the tally from Alexander Graham in the men’s 200m freestyle, Minna Atherton in the women’s 100m backstroke and Emily Seebohm in the 200m backstroke. The world short-course swimming titles in China finish on Sunday.