A need for speed has propelled Ariarne Titmus to Australia's first gold medal of the world short-course swimming titles in China with a record-breaking 200m freestyle win.

Known for her distance exploits, the 18-year-old credited a newfound focus on sprint work after mowing down American Mallory Comerford and the Netherlands' Femke Heemskerk to claim gold in 1min:51.38sec – a Commonwealth, Oceania and national record. 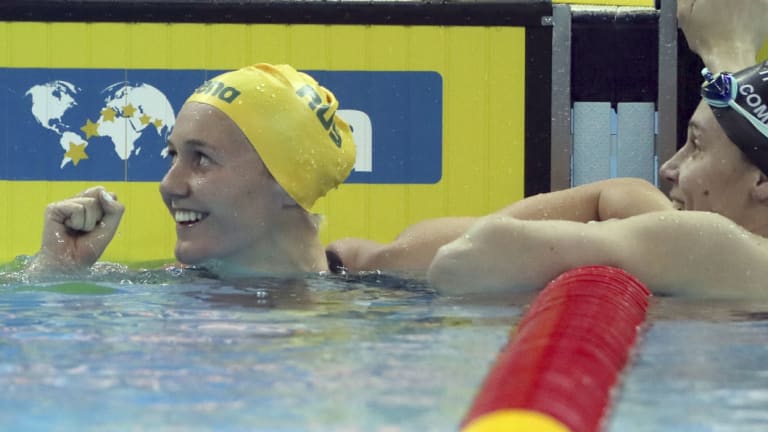 Titmus' stirring effort on the opening night of the six-day event in Hangzhou shattered Emma McKeon's 2015 mark of 1:51.66 and moved her to fourth on the all-time rankings.

She had been tipped to finally show what she could do in 200m freestyle at August's Pan Pacs long course titles in Tokyo.

But her anticipated clash with American great Katie Ledecky didn't happen after the teenager withdrew from the event to focus on the 400m-800m double.

Titmus was pleased to be able to finally flex her muscle in the 200m event – albeit in a 25m short course pool – after adopting a new focus on pace.

"I have been working on my speed, so I am glad it paid off. I knew the back end was my strength, so I just tried to play to that and it worked," Titmus said.

"It is my first individual world title, so it is a good stepping stone to next year with world championships and then Olympics after that."

Titmus' livewire coach Dean Boxall is usually a hard marker but had no complaints after the teenager got Australia on the medal tally.

"We had planned for the 400m and 800m at the Pan Pacific Championships and moved our focus to the 200m and 400m for this meet to give her the opportunity to get speed up and the plan came through," he said.

Australia missed a second medal by 0.05 of a second in the men's 200m individual medley final when champion backstroker Mitch Larkin was touched out for bronze by Japan's Hiromasa Fujimori.

Rookie Nic Brown was seventh in the 200m butterfly final with Japan's Daiya Seto claiming gold in a world mark of 1:48.24.

In day two finals, Alex Graham is top qualifier in the 200m freestyle and Australia are third fastest for the mixed 4x50m freestyle relay and sixth quickest for the women's 4x50m medley relay.