TOBIN HEATH made her allegiance to the red half of Manchester well and truly known in the run up to the derby with City.

The USA superstar arrived at the Red Devils in the summer and has already fully immersed herself in Old Trafford culture. 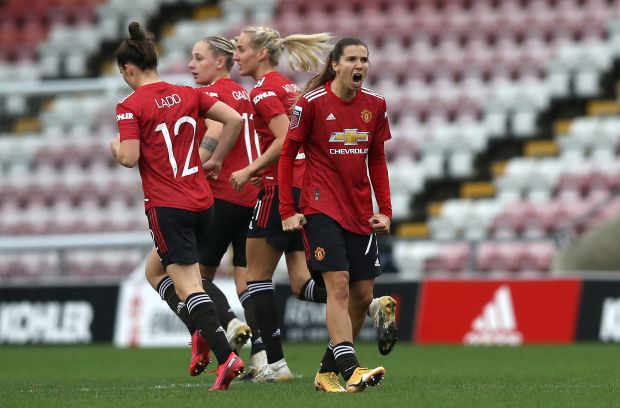 She told the New York Times: "I love learning about all the history,

“And we were taught that Manchester is red. Like nobody goes to Manchester City games.

“I feel like, City, because they’re this modern global team, in the United States we think they’re a really big club. But here in Manchester, it’s not a big club.”

When the Citizens were 2-0 up at half-time at the Leigh Sports Village on Saturday the 32-year-old may have been wishing she had stayed quiet.

But after the break she instantly put her money where her mouth is by cracking a contender for goal of the season into the top corner to get United back in it on 54 minutes.

She pounced onto a limp pass from Lucy Bronze and lashed in a sweet finish into the top corner from an awkward angle – sparking mayhem on the host's bench.

The USA World Cup winner even kissed the Red Devils badge in celebration.

He wrote on Twitter: "Tobin Heath angry goal!!" with a rocket and flame emoji, and posted a series of gobsmacked faces.

And he retweeted a post which said: "Tobin Heath my lord. Hulk smash."

He had previously been ripping into the Red Devils' defence after they shipped two goals in the first-half.

United went on to seize a point from their rivals thanks to Kirtsty Hanson's equaliser.

When Heath signed for United she made no secret of being a huge fan of the club.

She said: "Any footballer’s dream would be to play for Manchester United and to play at Old Trafford.

“I had all the feels when going back there. I was nerding out before and during the Olympics when we played there.

“I think in our first game, there was a group stage match and then we played that epic, semi-final against Canada.

“The pitch just has this iconic feeling about it and it's just such an iconic venue for any footballer.”