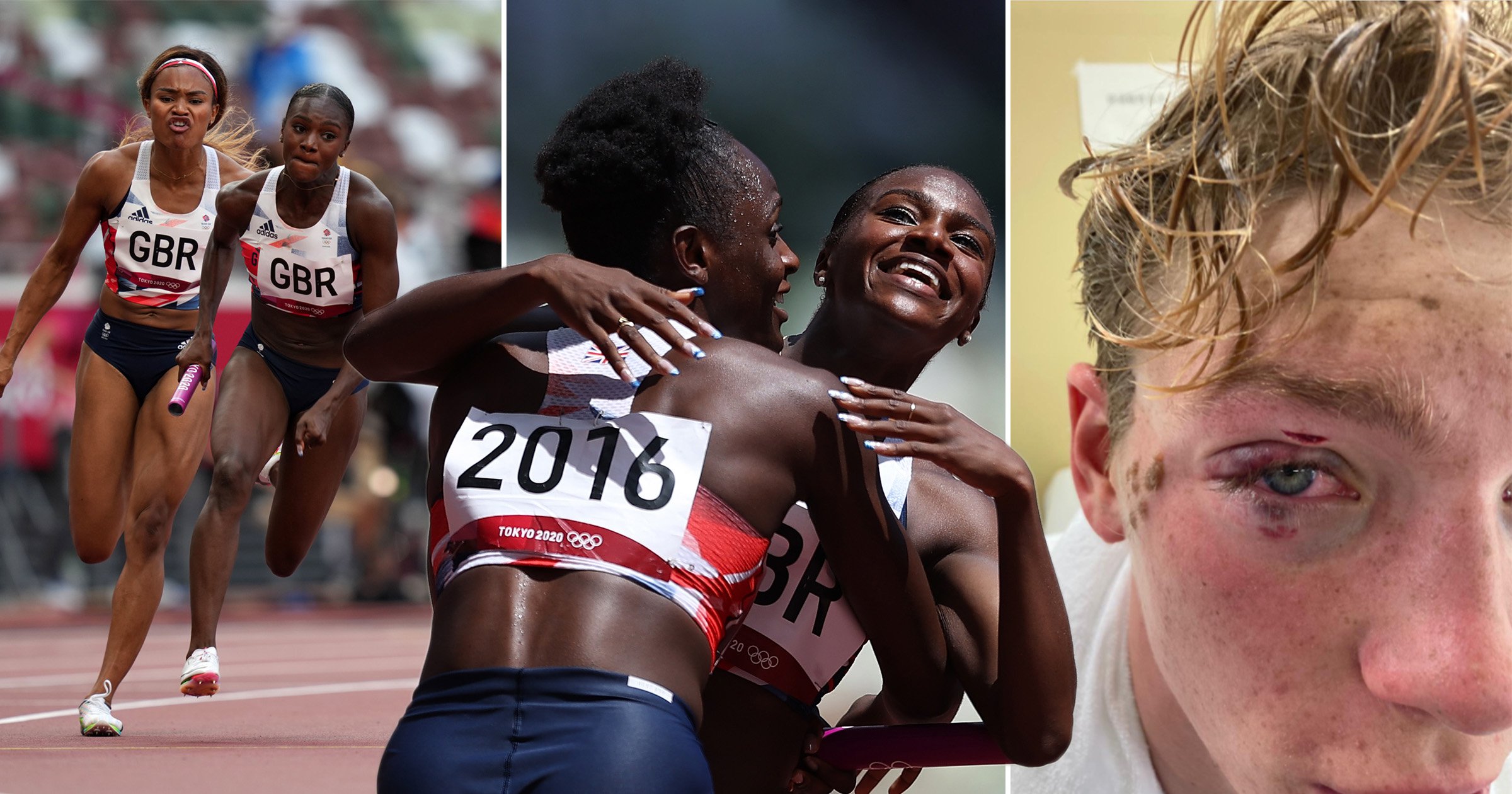 The drama continued at the 2020 Olympics on day 13 in Tokyo as Team GB set a national record, claimed a 49th medal and suffered agony.

Dina Asher-Smith overcame a hamstring injury to play her part in sealing a spot in the 4x100m women’s final.

She teamed up with Asha Philip, Imani-Lara Lansiquot and Daryll Neita to produce a 41.55 seconds run ans set a British record.

‘There was never any doubt in my mind that I’d be lining up here today because the relay’s really important, we got a bronze medal in Rio,’ said Asher-Smith, who withdrew from the individual 200m after failing to qualify for the 100m finals.

‘These ladies are in great shape, they’re incredibly talented, so I knew I had to rest up and get ready for the team event. I’ve been training hard to get ready.’

British swimmer Hector Pardoe took an elbow to the face in the 10km marathon swim as his hopes of a medal were dashed.

Pardoe was forced to quit the race after a stray elbow clocked him in the eye and he thought the damage was a lot worse while in the water.

‘On the last lap, I took an elbow to the face, I thought I had lost the eye. My goggles completely came off,’ Pardoe told the BBC after the race.

‘I like to think whenever I get an injury I’d be able to finish the race but the goggles completely fell off.

Liam Heath recovered from a slow start to claim bronze in the 200m sprint canoe.

In doing so, Heath, 36, secured a fourth Olympic medal of his distinguished career.

Sandor Totka of Hungary took the gold with a winning time of 35.035 as Italy’s Manfredi Rizza picked up silver.

‘It’s hard to put into words, it’s what you’re working towards, to be at your best for these events and I’ve learned so much along my journey,’ said Heath.

‘You learn more about yourself, your competitors and the people you work with day in, day out. It’s them working tirelessly behind the scenes which provides the support for me to be able to achieve my dreams.’

Jamica’s Hansle Parchment produced a shock as he defeated heavy favourite Grant Holloway of the USA in the 110m hurdles final.

‘I came here wanting to win a medal, I wasn’t moving quite how I wanted. Sadly, in that race I tried to fight it a little bit. It’s a disappointment not to win a medal,’ said Pozzi.

‘It’s been a big journey, I’m so grateful for everyone who’s contributed over the last decade. It’s frustrating, it’s not quite where I want to be.

‘I’m proud of the progress I’m making, although I’m not happy with the result today I’ll keep building. Thank you to everyone at home.’

What else is happening on day 13 at the Olympics?

Britain will be hoping for some cycling medals in the men’s omnium, with Matt Walls hoping to extend Team GB’s two-podium streak after Ed Clancy and Mark Cavendish’s efforts in London and Rio.

There are a series of athletics medals on offer, including the 20km and 50km walks, the women’s pole vault, women’s heptathlon, men’s decathlon and the 400m men’s race.

Australia and Belgium will compete for men’s hockey gold, there are multiple wrestling and karate medals up for grabs, while China and Japan meet in the women’s table tennis gold medal match.