The father of Bernard Tomic says he will begin legal action against Lleyton Hewitt, whom he alleges left his 17-year-old son traumatised in 2010 by trying to pressure him into revealing who at Tennis Australia was “against” him. John Tomic further alleges that Hewitt warned his son he would not play Davis Cup again if he didn’t.

Tomic’s slamming of Hewitt earlier this week – claiming “no one likes him” and that he favoured particular players – has now descended into a full-blown war after the two-time major winner said Tomic had threatened him and his family and tried to blackmail him in the past two years. 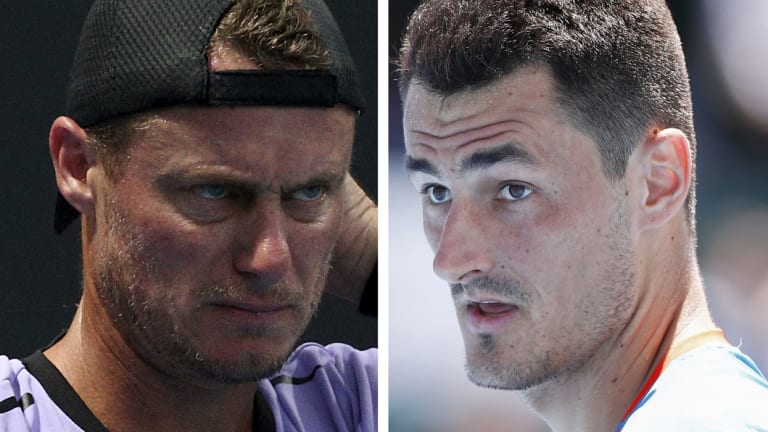 There was a further escalation on Friday when Tomic’s father and long-time coach John alleged his son had been traumatised as a teenage Davis Cup debutant when Hewitt came to his hotel room in Melbourne while he was there for an Australian tie against Taiwan in March 2010 and demanded he inform him who from TA was telling him what to say publicly.

Hewitt, who was not playing after hip surgery, had at the time been highly critical of TA during a period of turmoil for the sport’s governing body and, according to Tomic snr, had been angered by comments made by the No.298-ranked teenager at Melbourne Park that “were not suitable” to Hewitt.

“Bernard said something on the television before that Lleyton didn’t like,” Tomic snr told the Herald on Friday.

“[Hewitt] came into Bernard’s room, closed the door and pushed [Davis Cup captain] John Fitzgerald out and he said, 'You have to tell me who from TA is against me’.”

He tried to force him to say something. Bernard was shocked, he couldn’t sleep all night.

Tomic snr said Hewitt was on crutches and told his son he would not play Davis Cup for Australia again unless he spoke up about TA.

“He tried to force him to say something,” Tomic snr said. “Bernard was shocked, he couldn’t sleep all night.

“Bernard had made a comment at Melbourne Park that mentioned Lleyton Hewitt. That comment Lleyton didn’t like and he asked, 'Who told you to say that?’

“He was young … 16 and a half or 17. How can you come in the room and threaten him and say you won’t play Davis Cup and say you won’t be close to me if you don’t tell me who from Tennis Australia is telling you what to say?”

He said they would take legal action against Hewitt next week.

“We will prove that Bernard has trauma from 2010 when Bernard was the youngest player in Davis Cup for Australia,” he said. “They will try to protect him but we will find the truth in the court.”

Contacted by the Herald on Friday, Hewitt’s manager David Drysdale said of the alleged 2010 episode: “I know nothing about it and I’m not going to comment any further.”

Tomic on Friday was quoted by News Corp denying Hewitt’s claims of threats against his family. “I got nothing to do with your family and I don't care what's wrong with you, you liar,” Tomic was quoted as saying.

The Tomic camp had been already been at odds with Hewitt by 2010, with the origins of the feud reportedly stretching back to Tomic sledging fellow Australian player Peter Luczak at a Davis Cup tie in Chile in 2008. In 2009, Tomic then turned down an invitation from Hewitt to practise with him at Wimbledon, saying he had swine flu.

Hewitt had also questioned the merits of Tomic’s Davis Cup selection in 2010 when he was ranked so low. But on February 27, 2010, a week before the Taiwan tie, Tomic said he and Hewitt were “cool” and had resolved their issues.

"I called Lleyton in December and it was good to hear back from him about a week (ago)," Tomic said at the time.

"We spoke, we've fixed it all up, it was just a bit of a misunderstanding we had, but we're all cool now which is the main thing."

Tomic snr conceded on Friday that his son, who was ranked No.88 in the world leading into the Australian Open but lost in the first round to sixth seed Marin Cilic, should not be considered for Davis Cup at the moment because he did not work hard enough and he had slipped from a peak of No.17 in 2016.

But he argued Hewitt had no right to rule him out of Davis Cup contention under his watch, as he did on Thursday night.

“Lleyton Hewitt said in the interview also that Bernard will never play Davis Cup,” he said. “This is not fair, not nice. Australia is not his. If Bernard improved his ranking, Bernard can play for his country.

“Bernard at the moment is not [fit] for Davis Cup because his ranking is not good. If Bernard improves his ranking, and physically and mentally as well, it’s not up for Lleyton to decide. Australian tennis not Lleyton Hewitt. He cannot say he cannot play.

“What I can say is Lleyton Hewitt is a real champion and he make history. He is a very hard worker. I know that. But I think that he crossed the line now.”