Tony Finau put a lucky 13th ball in his bag for his opening round of one-under-par 71 on Thursday at the Masters.

Along with the four sleeves of three balls that he typically carries, Finau had one with the Augusta National logo signed by his idol, Billy Casper.

Casper, the 1970 Masters champion, became something of a Finau fan years ago, when they met in Utah, their shared home state. He died at 83 three years before Finau, 29, made his Masters debut, managing a tie for 10th last year despite sustaining a high-ankle sprain while celebrating a hole in one during the Wednesday par-3 contest.

After watching Finau gamely make his way around Augusta National, a friend, Larry Olsen, gave him the ball signed by Casper.

“After last year’s incident,” Finau said, referring to his injury, “Larry felt Billy would have wanted me to have it.”

For nearly a year, the ball sat on a shelf in Finau’s trophy room in his home near Salt Lake City. He decided to put it in his bag for this event to honor Casper, who loved the Masters, and also as a talisman.

“Maybe Casper the ghost will appear, and we’ll get that green jacket,” Finau, who is ranked 15th in the world, said Thursday with a laugh. 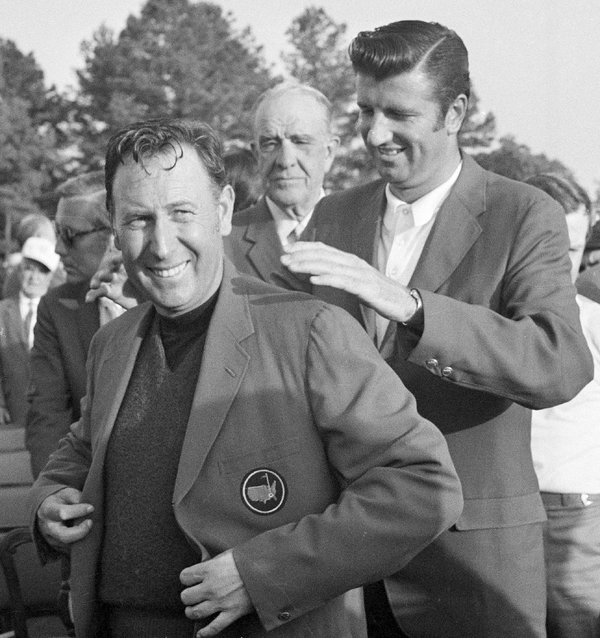 Finau evoked Casper’s memory by scrapping through the first round in what his caddie, Gregory Bodine, described as “a nervy start.”

Finau found fairway bunkers off the tee at Nos. 1 and 2, hit out of the sand on four of the first five holes and somehow made the turn at par. He got up and down for par at the fifth hole from a bunker behind the green and almost chipped in on the par-3 sixth after a bad tee shot.

“I think those were the huge momentum changers throughout the round that you need to post a good number,” said Finau, who offset his bogey at the par-3 fourth with a birdie at the par-5 eighth to make the turn in 36 strokes.

“I was quite pleased, actually, to be teeing off at 10 at even par,” he said. He had birdies on both the par 5s on the back nine and, after bogeying 17th, just missed a birdie at 18 to finish the day five strokes off the lead.

One of Casper’s 11 children is certain that their father would have been impressed by Finau’s round.

“Even though Tony hits the ball a huge distance, what Dad saw and really liked about his play was his course management and his ability to get the ball around the golf course,” Casper’s son Bob, the third oldest of the 11, said in a telephone interview. “Because those where things that Dad prided himself on in his game.”

Finau recalled that Casper had once described his 18-hole playoff victory over Gene Littler at Augusta National as his “proudest moment.” He and Casper met for the first time at a golf event in Utah, where Casper kept a residence in addition to one in his native San Diego.

Finau was 14 and showing great promise in the game, which he learned to play by swinging at targets on mattresses hung from the ceiling of his family’s garage in Salt Lake City. Finau’s hardscrabble beginnings and close family ties reminded Casper of himself.

The next time they saw each other, late in Finau’s teenage years, Casper presented him with an autographed copy of his memoir, “The Big Three and Me.”

The Big Three referred to Jack Nicklaus, Arnold Palmer and Gary Player, who commandeered the headlines and the commercial enterprises while Casper quietly went about winning. He finished with 51 PGA Tour victories and collected at least one title in 16 consecutive seasons, from 1956 to 1971.

“He won more tournaments than the Big Three in the ‘70s and ‘80s,” Finau said. “It’s laughable that people don’t talk about him as one of the greatest of all time.”

“Deep down, I think he believed I could be somebody in the game,” Finau added,” “ and giving me his book and wishing me well was really all I needed as a kid to be inspired.”

After Casper died of a heart attack, Finau attended the funeral. “It meant a lot to our family, and it would have meant a lot to Dad,” Bob Casper said.

“She loved that my dad really liked Tony,” Bob Casper said, adding, “I think what my dad saw, and what she now sees, is a heart of a champion; someone who hasn’t necessarily taken the easy road to hone their craft.”

Shirley Casper followed Finau’s round on television and afterward sounded as if she had seen a ghost.

“Tony played the percentage shots just like Billy,” she said through Rich Katz, a family spokesman. “If the pin is on one side and there’s danger there, he’d hit away from that even if he’d two-putt.”

“He’s a very careful, conservative and smart player,” she added. “I look forward to him contending.”