MANCHESTER CITY boast the most valuable squad in European football – worth an eye-watering €1.08BILLION, around £924.5m.

All members of the Premier League's so-called 'Top Six' have made the top ten – including Arsenal, despite their dreadful start to the season. 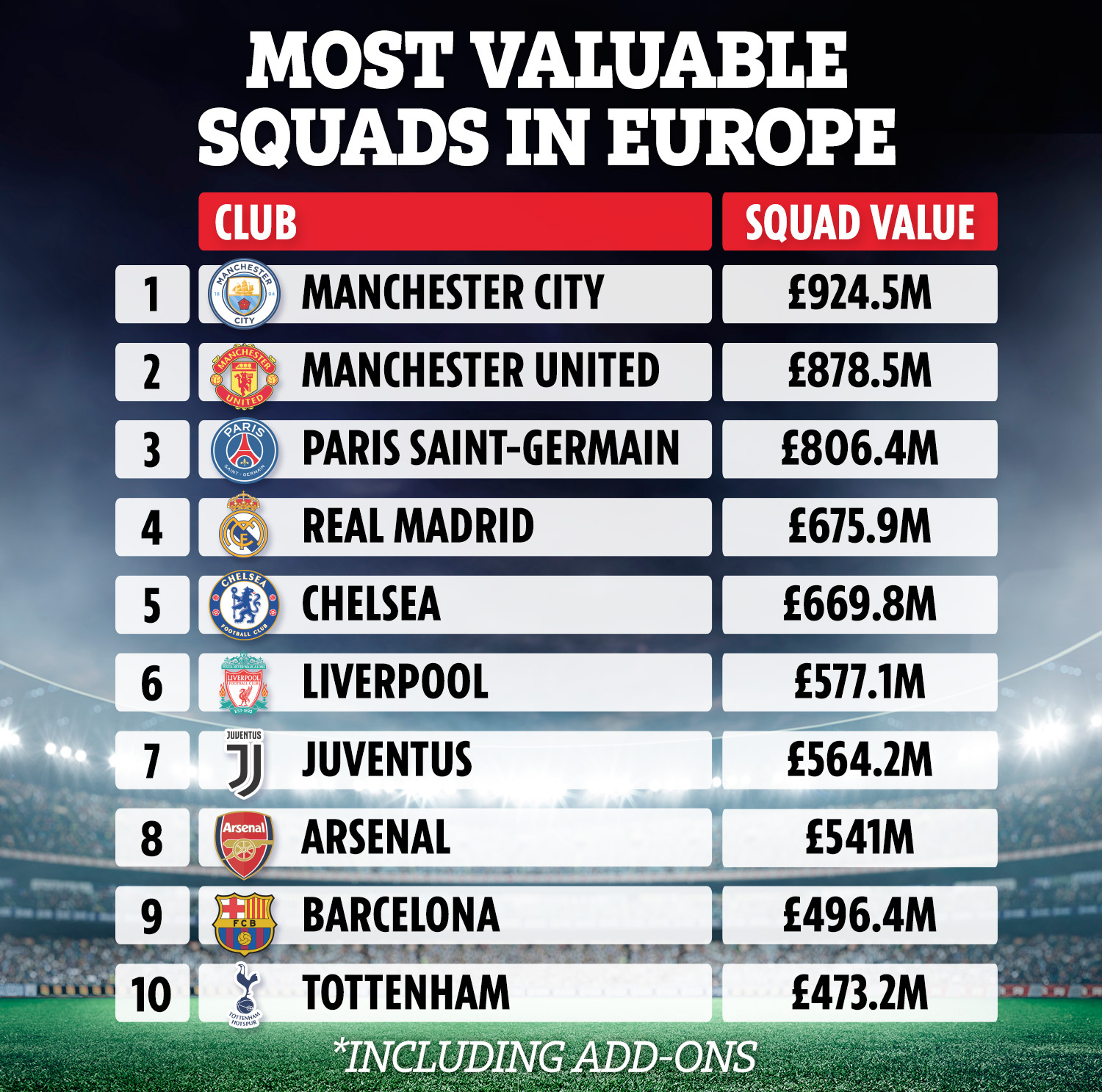 That valuation was pushed over the €1bn mark by the arrival of Jack Grealish from Aston Villa for £100m in August.

Second on Europe's transfer fee list is Manchester United, who also broke the €1bn barrier this summer by signing Jadon Sancho for £73m.

United's squad is worth €1.02bn – around £878.5m – spending more than Paris Saint-Germain, who splashed £197MILLION on one player when they signed Neymar from Barcelona in the summer of 2017.

The French side have been able to keep under the €1bn mark by signing several free transfers during the summer transfer window.

There's then quite a big gap between PSG and the team fourth on the list – Real Madrid – who've spent £675.9m on their current squad.

The Spanish side are known for their Galacticos but aren't spending the cash like they used to – in comparison to modern transfer fees.

Ex-Chelsea winger Eden Hazard is their record signing – paying £130m for his services – but that was a rare splurge from Real.

Zinedine Zidane is STILL their fourth biggest signing for around £70m – TWENTY YEARS after arriving in the Spanish capital.

Making up the top five on the list is Chelsea, who boast a squad worth £669.8m after the £97.5m signing of Romelu Lukaku from Inter Milan.

There's quite a significant gap between them and the sixth-place club – Liverpool – who have spent £577.1m on their talented squad.

The seventh biggest spenders in Europe are Juventus, who've dropped to £564.2m after offloading £99m signing Ronaldo to Man Utd in August.

Then come Arsenal – remarkably – who have spent £541m on a squad that haven't picked up a single Premier League point this term.

The Gunners' squad is worth more than cash-strapped Barcelona's – and by quite some distance – who've spent £496.4m on their current stars.

Last on the list is Tottenham, with the famously frugal North London club investing £475.2m to qualify for the Europa Conference League.