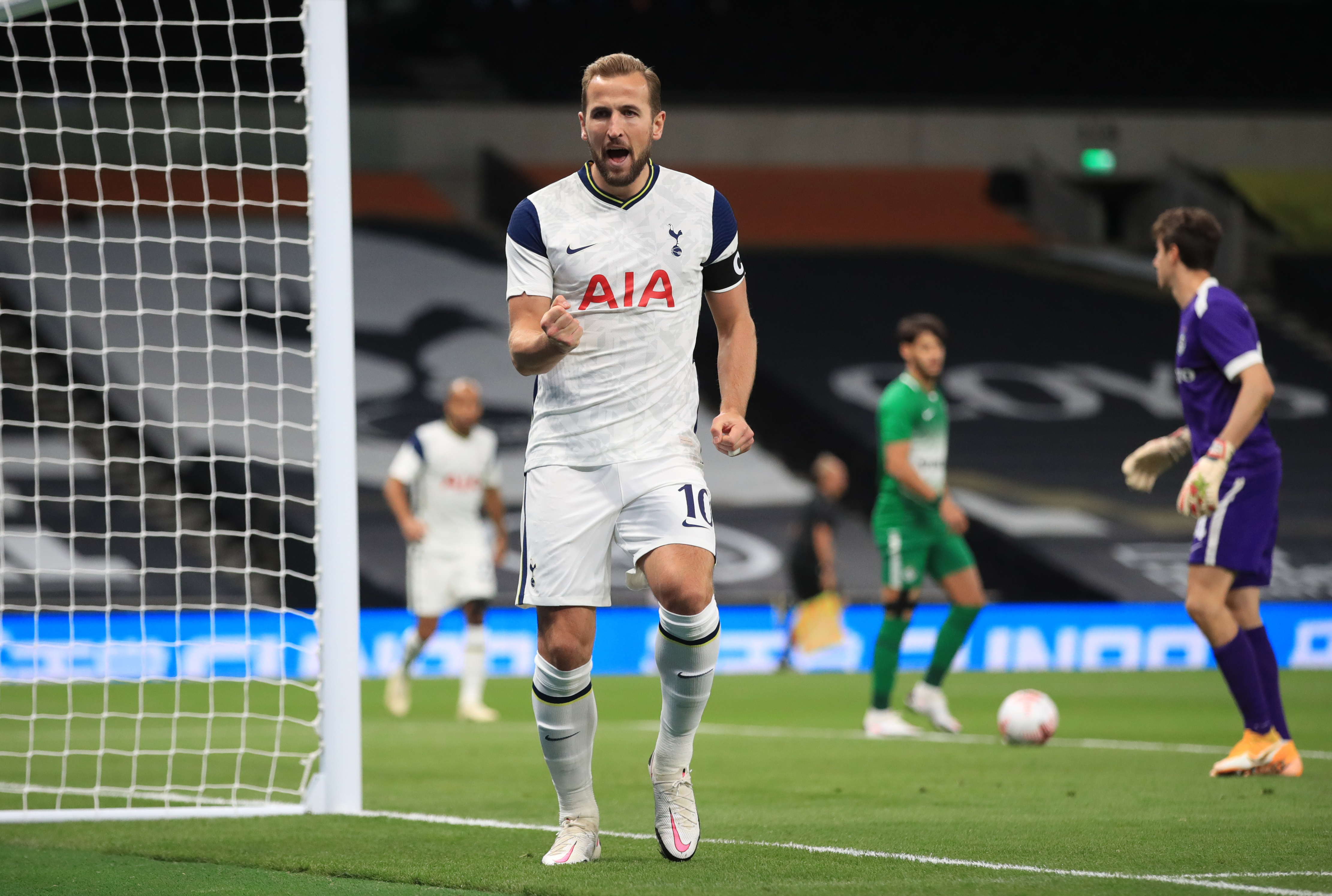 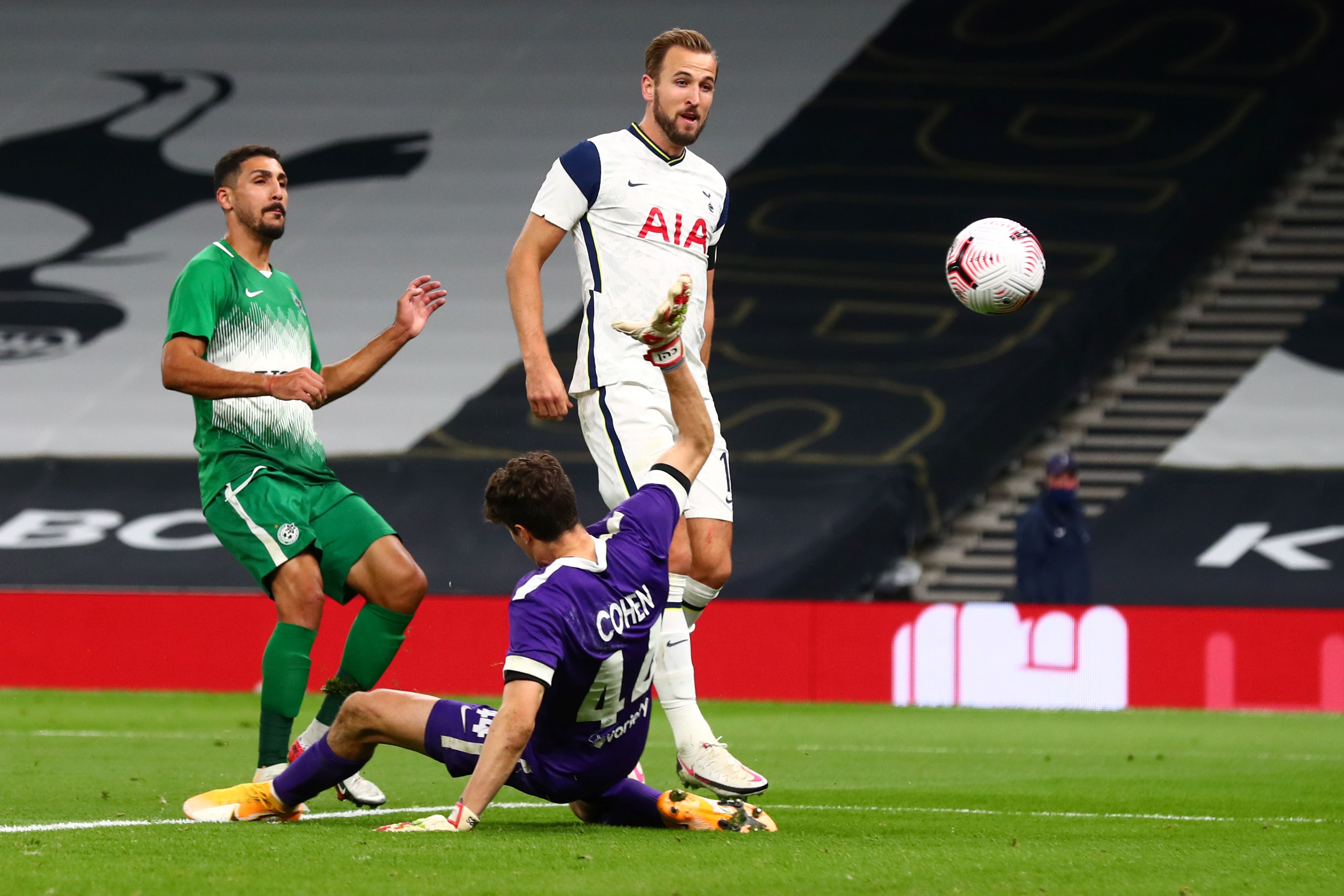 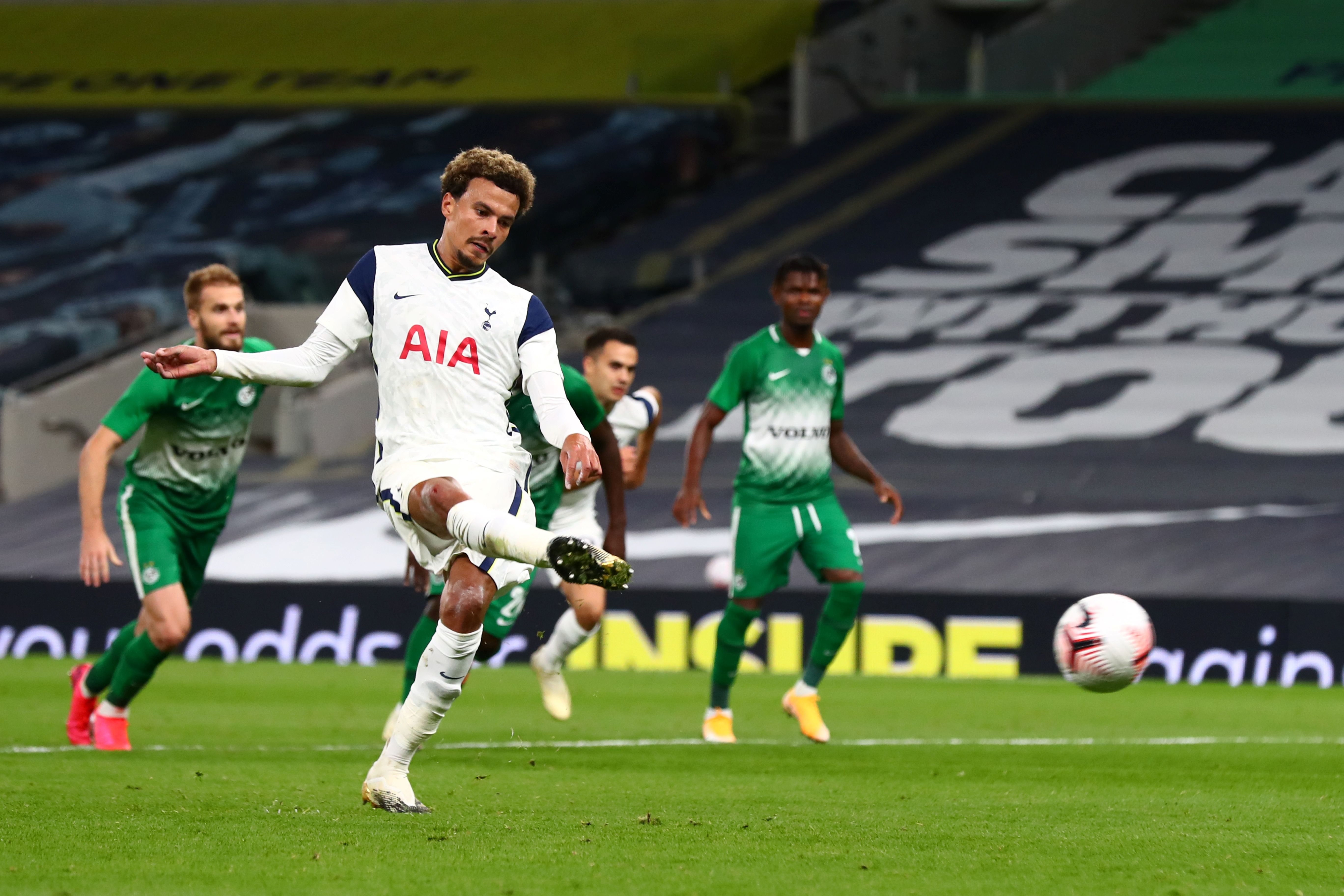 A Lucas Moura header and Giovani Lo Celso’s brace ensured this play-off was as good as over by half-time.

Kane cancelled out an absurd Haifa penalty in the second half to seal Tottenham’s passage before completing his treble with a fine 74th minute finish.

Half-time sub Dele Alli then bagged the seventh with another spot after Kane had been subbed.

But the Prem giants did not have it all their own way as while all the talk in the build-up was about Fani, they forgot about Chery.

And it was ex-QPR man Tjaronn Chery who stunned Spurs by making it 1-1 with a stupendous 25-yard shot in the 17th minute.

The Surinamese let his feet do the talking, unlike his team-mate Abu Fani, who was seen in an online video celebrating his winner at FC Rostov in the previous round by dancing around the dressing room and screaming: “Harry Kane is on my c**k.”

The Israeli probably wished he had not been such a dick as after seeing his opponent fire the hosts in front, he then gave him a nice little rap around the ankles.

If Spurs get something at Manchester United on Sunday it would be a promising start to the campaign under extremely difficult circumstances.

The only surprise is that after what had been said, Kane waited eight minutes to send him crashing.

This was Tottenham’s seventh match in 19 days and, having also booked their place in Carabao Cup last eight, if they manage to get something at Manchester United in the League on Sunday then it would be a promising start to the campaign under extremely difficult circumstances.

Coronavirus has changed the football landscape almost beyond recognition – but reassuringly the Europa League is pretty much the same as it was pre-lockdown.

Thursday nights in empty stadiums playing teams you have never heard of.

It is a scenario Spurs chairman Daniel Levy would have neither envisaged or entertained 12 months ago following his club’s historic appearance in their first Champions League final.

But after four successive seasons of dining at Europe’s top table, the North Londoners have to be content with the continent’s left-overs having scraped into a sixth placed finish in the top flight last term.

In Mourinho they have a manager who, having previously lifted this trophy with Porto in 2003 and Manchester United in 2017, has vowed to try to win it again. 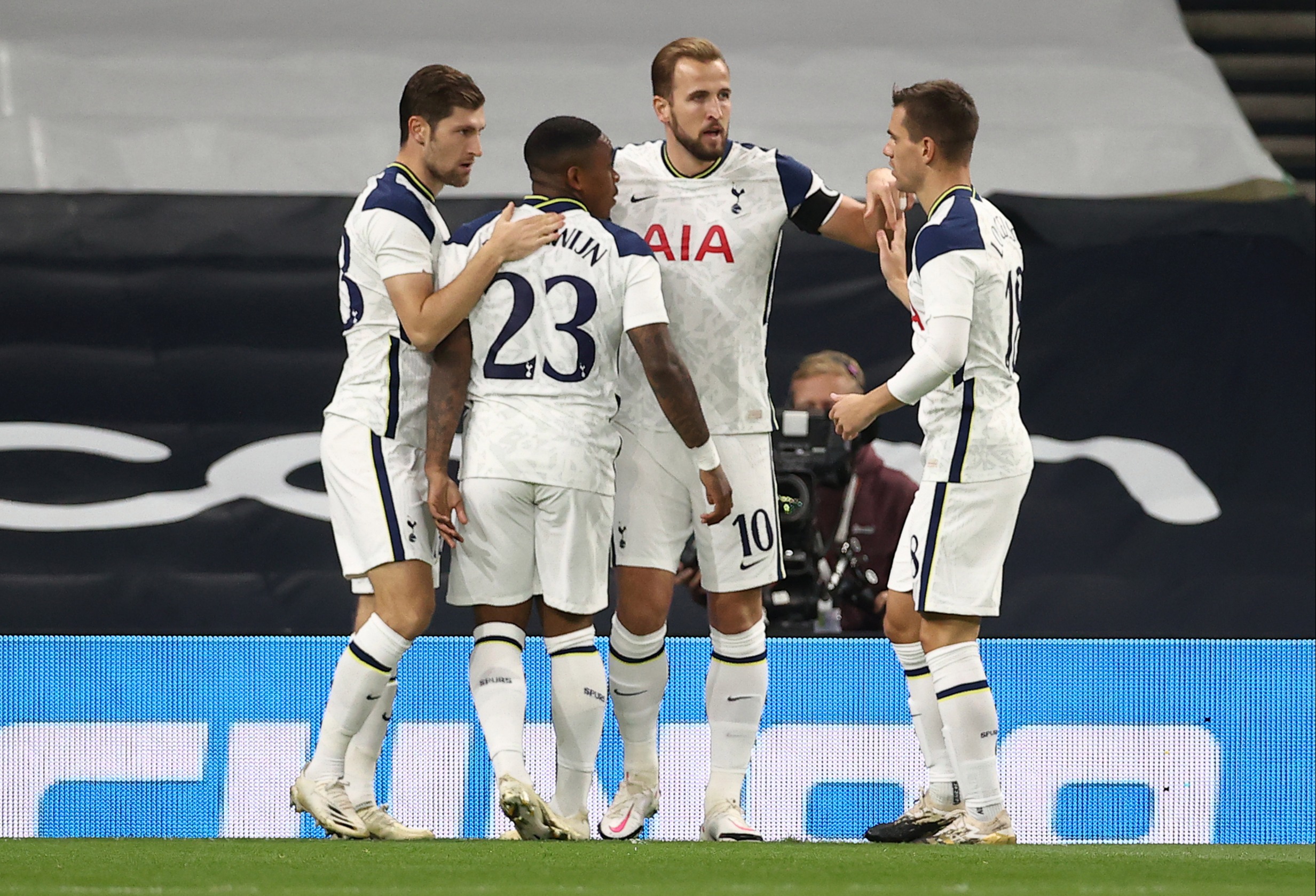 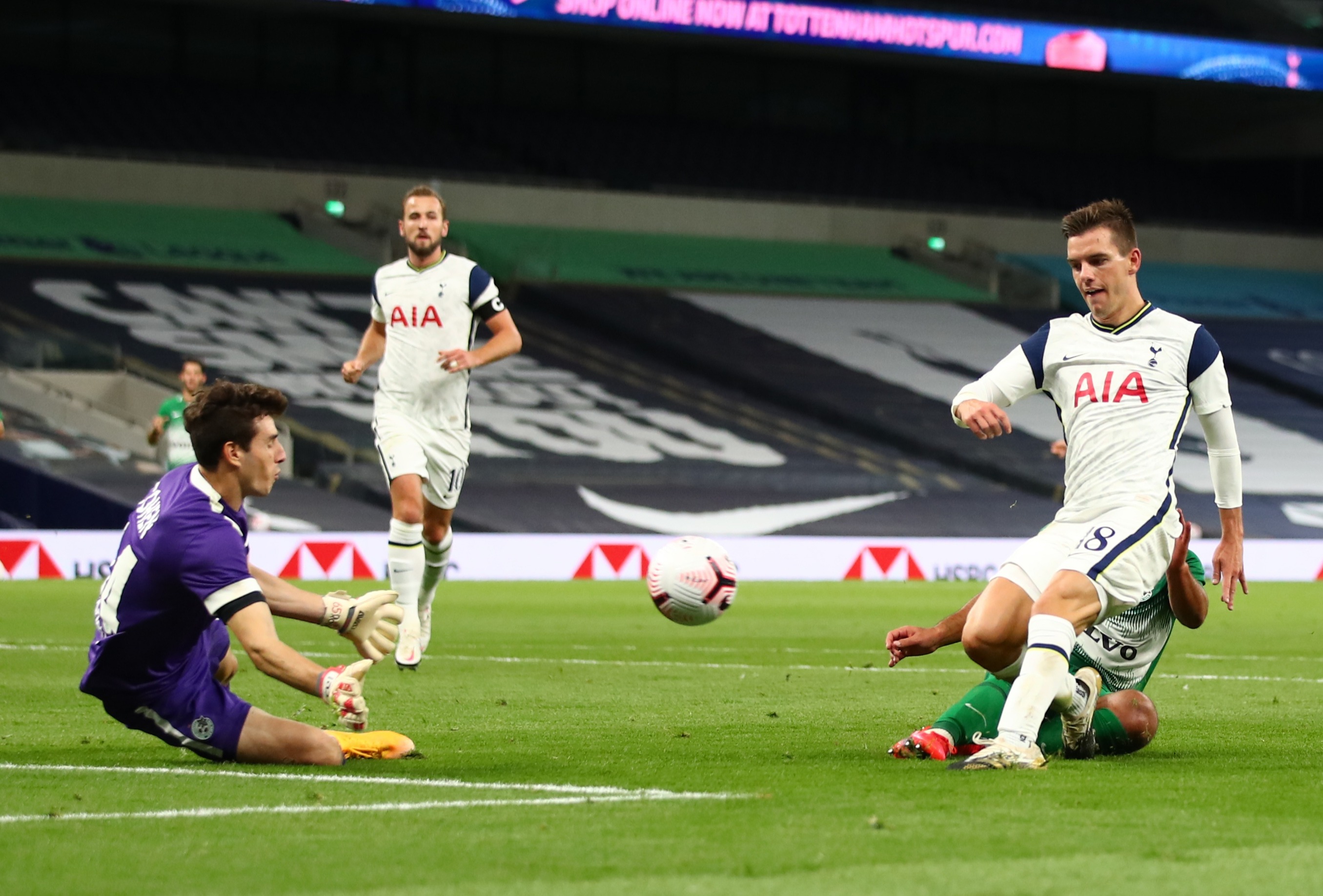 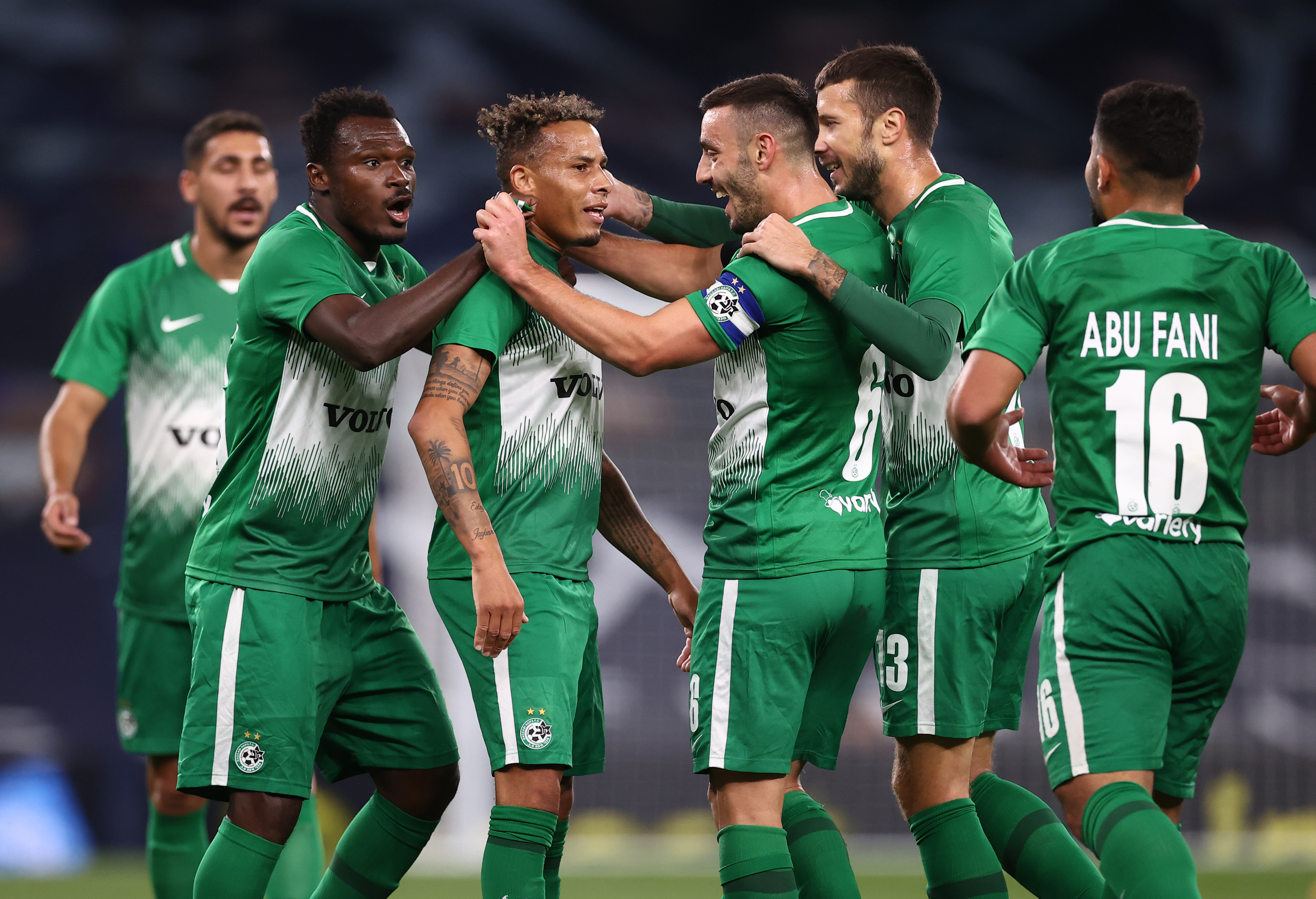 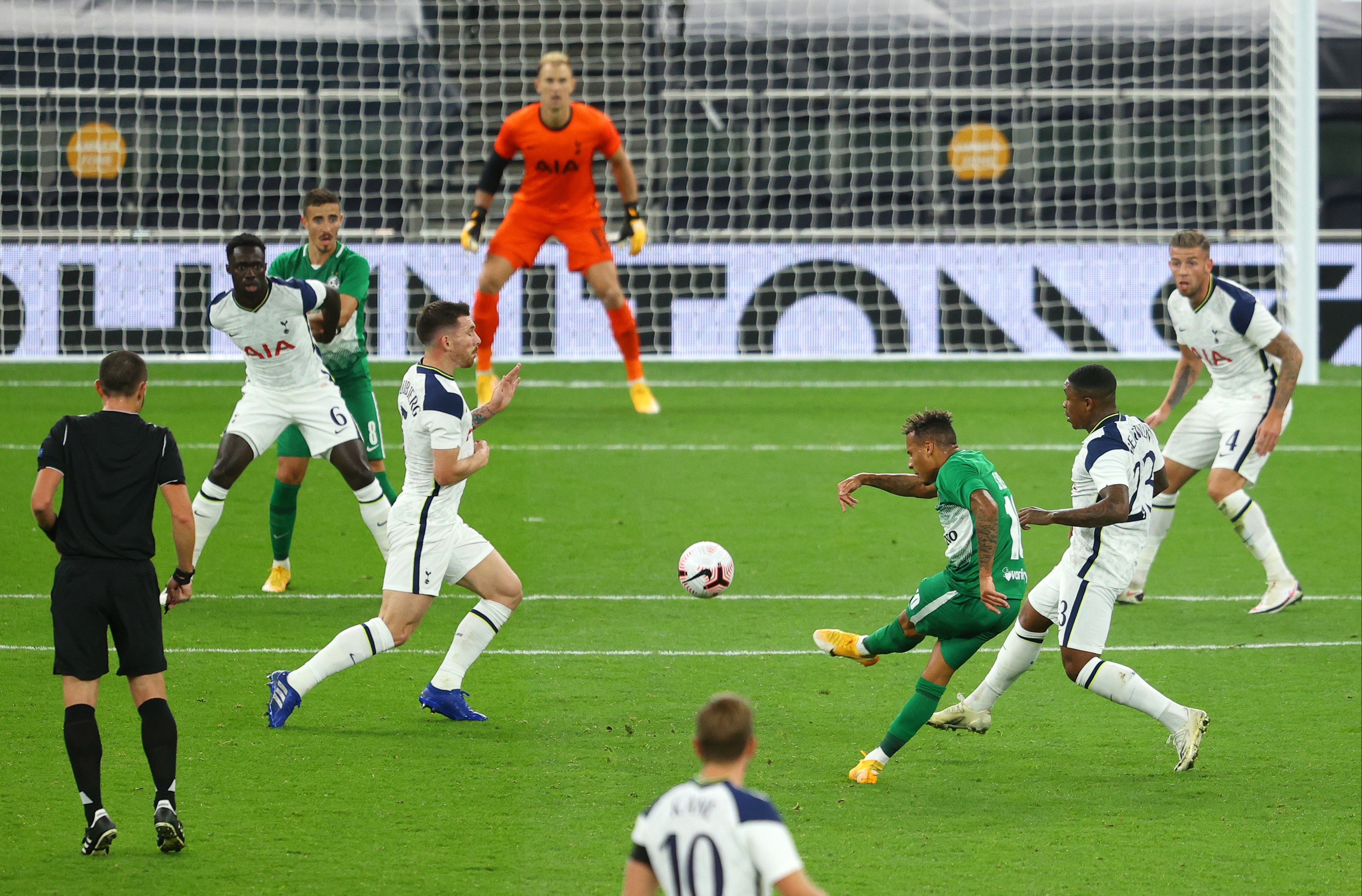 Some might say it shows how far the Portuguese and Tottenham have fallen.

But winning this competition – to seal a return to the Champions League – could be just what this club needs after yonks without silverware.

Mind you, they will have to play better than this if they want to go all the way.

Keeper Joe Hart, in for first choice Hugo Lloris, could be heard screaming at his team-mates in the first half: “Can we get hold of this f**king team? We’re all over the shop.”

Kane’s quickfire opener was beautifully crafted by Spurs left-back Ben Davies, who played a neat one-two with Steven Bergwijn before whipping in a low cross which the England skipper side-footed in from close-range.

But after Lo Celso had wasted a golden chance to double the lead, Chery – who had just tested Joe Hart with a shot from the edge of the box – shocked the hosts by equalising with a pearler of a curler from even further out in the 17th minute.

It was the former Hoops' first goal in England for four years – and definitely worth the wait.

Unfortunately for the visitors, the score remained level for just three minutes as Moura restored Tottenham’s advantage with a near-post glancing header from Bergwijn’s corner.

Lo Celso then redeemed himself for his earlier wastefulness by netting twice in three minutes to kill off this tie before half-time.

His first in the 36th minute was an emphatic left-footed shot into the top from 12 yards after the Haifa defence had blocked efforts from Moura and Kane.

The Argentinian’s second was a clever little dink over oncoming Maccabi keeper Josh Cohen to make it 4-1. 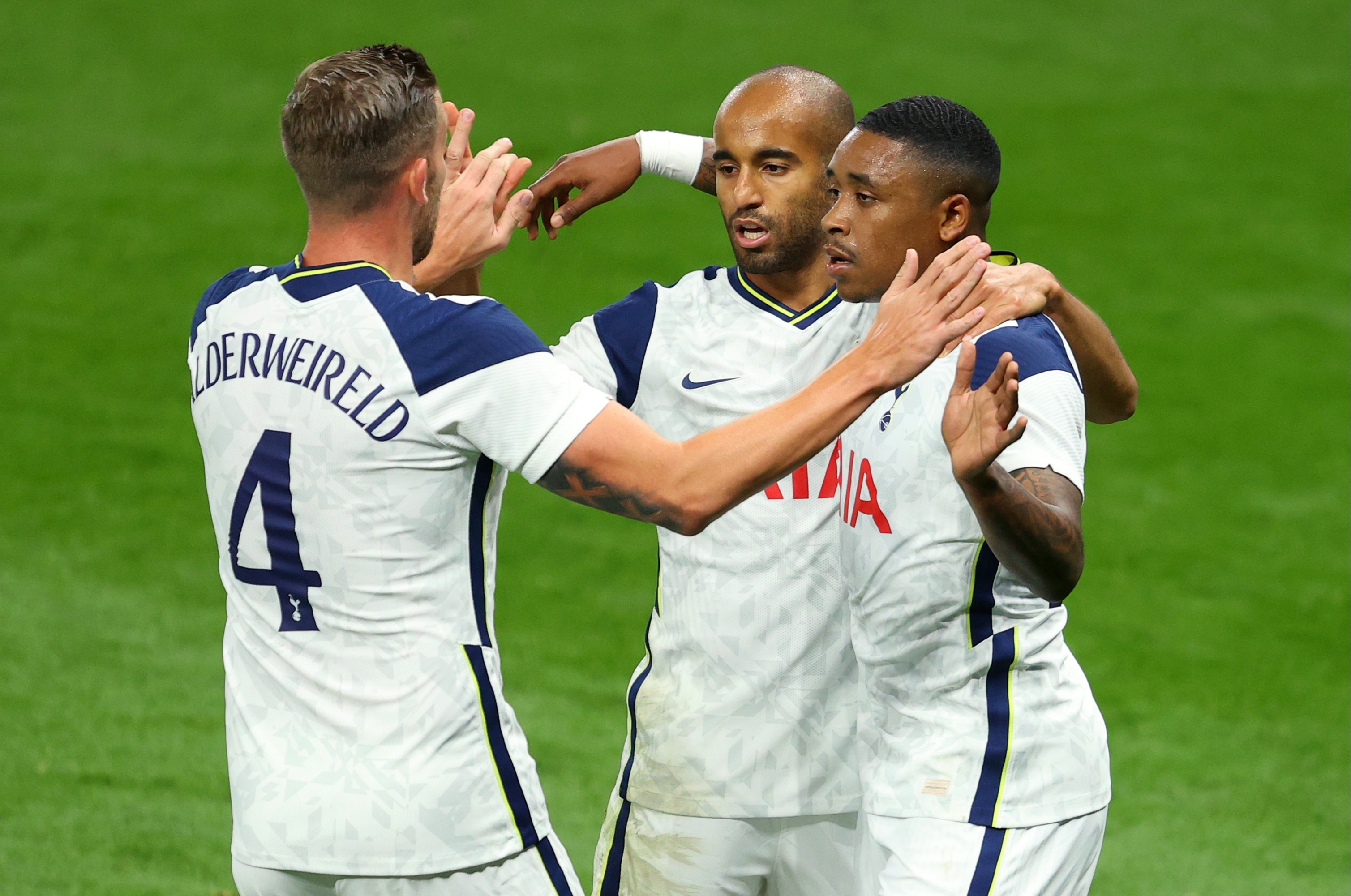 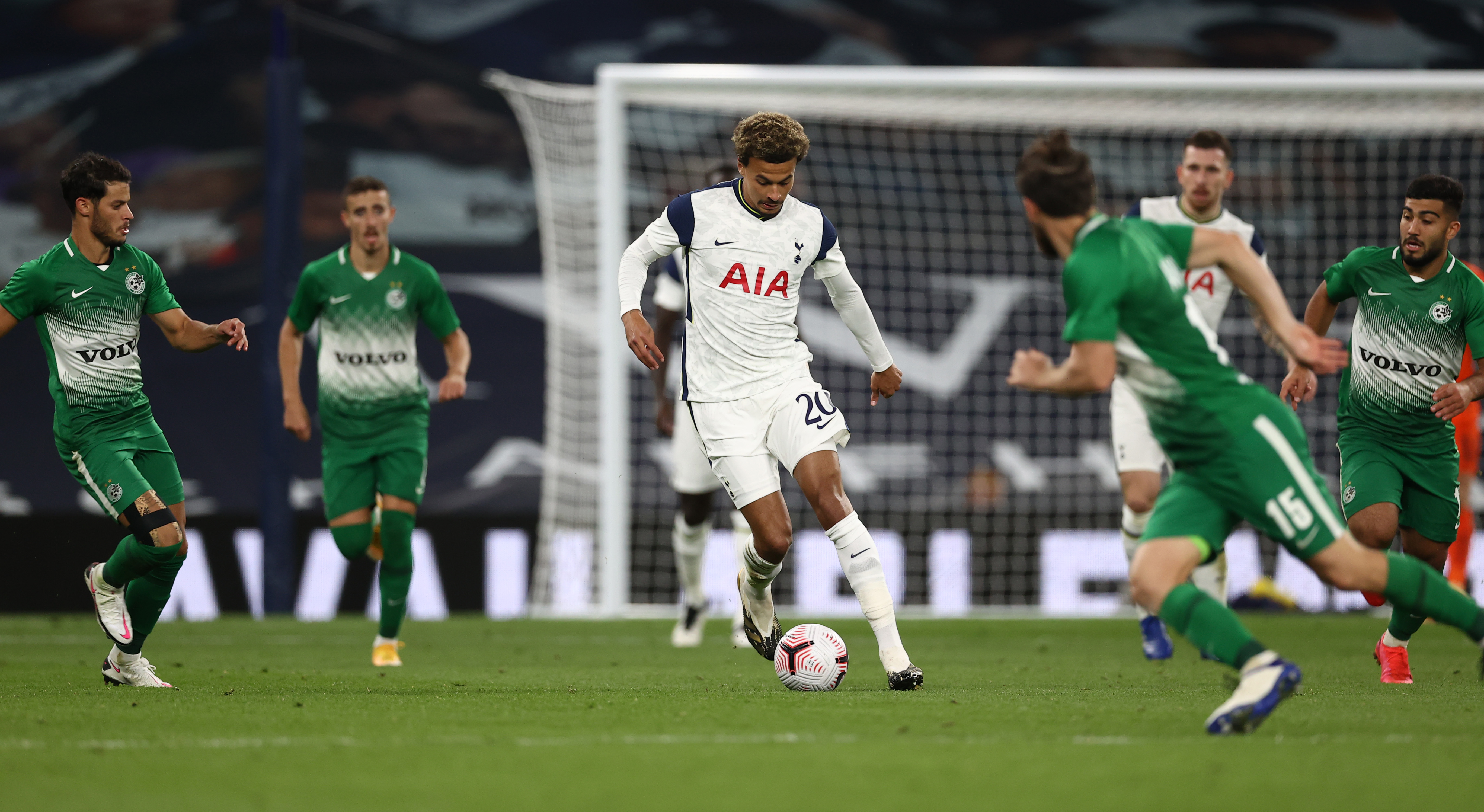 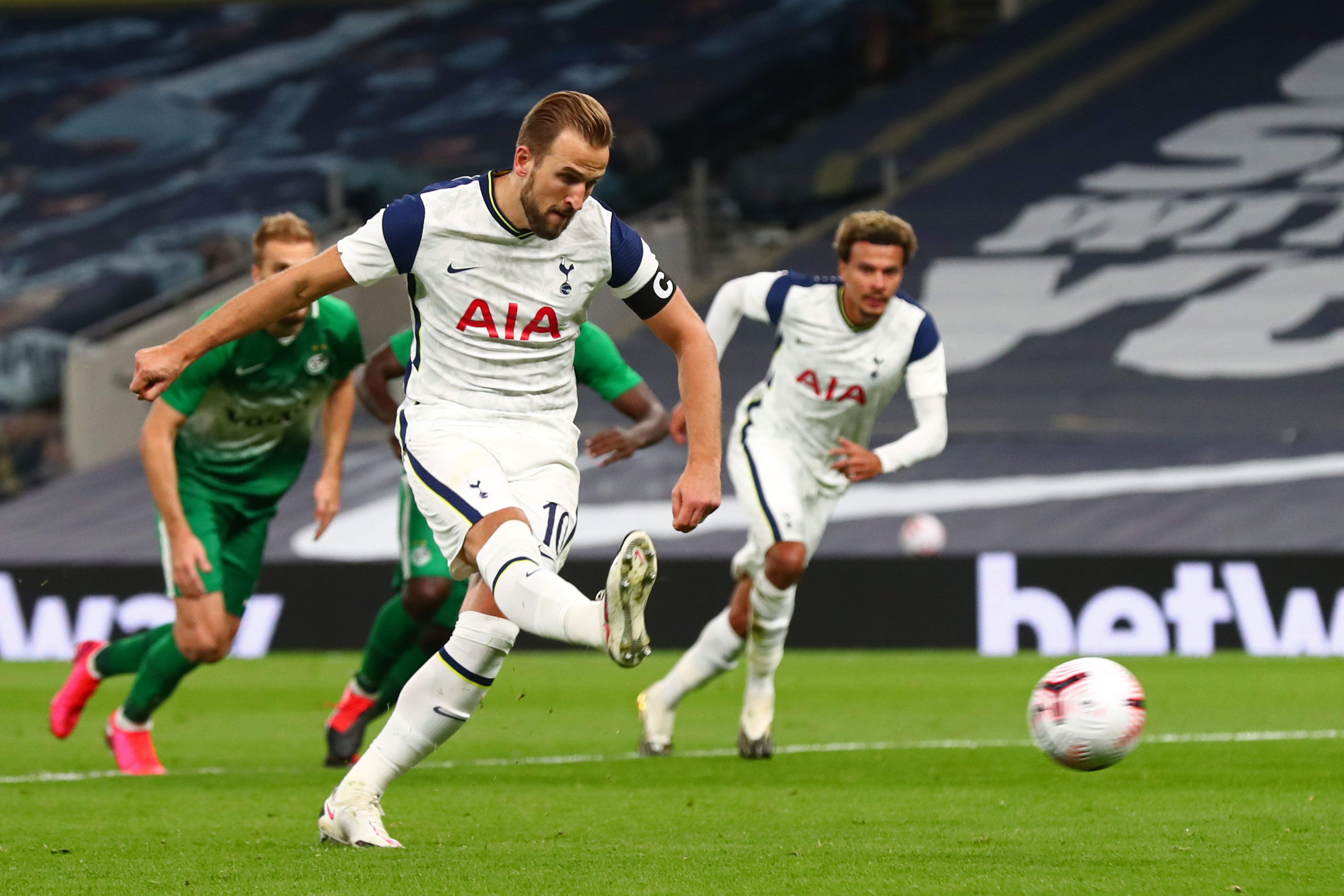 But any hopes of a hat-trick were dashed as he was the one to make way for Dele Alli during the break.

Nikita Rukavytsya pulled one back for the Israelis with a 52nd minute penalty after Tottenham were the victims of another diabolical handball decision when Dolev Haziz’s flick hit Matt Doherty on an arm and French ref Ruddy Buquet pointed to the spot.

And Buquet hardly came out of this tie smelling of roses as he then awarded an even worse one against the visitors just four minutes later when Davies’ cross hit Ernest Mabouka somewhere near an arm.

Kane dispatched the penalty for his second of the night.

Haifa, to their credit, refused to roll over and Mourinho might have done an Eric Dier had Rukavytsya’s header not been chalked off for offside – ruining any chance of a nervy climax.

But Kane wiped away any stench of an upset with a chipped finish to complete the 15th hat-trick of his career.

And after he was replaced by new boy Sergio Reguilon, Dele put Spurs in seventh heaven with another spot kick after he had been brought down in the box.

Shove that up your Fani.