MELBOURNE, Australia — For roughly the past two decades, the analytics crowd has peddled the idea that sports is essentially math, that what unfolds on the field of play is predictable and intelligible if viewed through a proper algorithm. Occasionally that crowd has even been right. And in many ways the pandemic sports environment was an analytics aficionado’s dream, a chance for games to unfold in a laboratory, free of the noise, both literal and figurative, that can turn an expected outcome into a beautiful mess.

Now, nearly a year into the coronavirus pandemic, we really do know the roar of the crowd is as vital to sports as a ball or a net. The artificial crowd noise that Major League Baseball, the N.F.L., the N.B.A. and the N.H.L. have piped in, both for those in the stadiums and arenas and for people watching at home, is a terrible facsimile that makes the spectator-free games feel nothing like sports at all. What stage actors refer to as the “fourth wall” — the metaphorical barrier between performers and spectators — doesn’t exist in sports. A crowd’s passion can seemingly help power comebacks. Its scorn can smother one, too.

For five glorious days at the 2021 Australian Open, I got to experience that noise again, because government officials allowed up to 30,000 fans, about 50 percent capacity, to attend the tournament each day. It was both a joy and a revelation to rediscover the power of what the quantum physicists call the “observer effect” — the fact that any observation, however passive, alters an outcome — even in a half-capacity crowd of tennis fans. Sports felt like Sports once more.

Then on Friday, the coronavirus did what it has done so relentlessly for the past 11 months: It shut down the party. A recent outbreak was what much of the world would consider a nuisance. But in Australia, which has managed the pandemic more effectively than any other major economy, it qualified as a critical mass.

The cluster of coronavirus cases grew to more than a dozen, and the state government of Victoria, where Melbourne is, declared a “snap lockdown” of five days, beginning at midnight Friday.

Everyone, except those deemed essential workers, must stay home, though two hours of outdoor exercise and one hour to go to the grocery store or pharmacy are permitted. Players and people considered essential in running the Australian Open will be allowed at Melbourne Park. Spectators, sadly, must stay away until perhaps the singles semifinals, scheduled to start Thursday.

“The players will compete in a bubble not dissimilar to what they have done throughout the year,” said Craig Tiley, the chief executive of Tennis Australia, which organizes the tournament.

No one is happy about it. 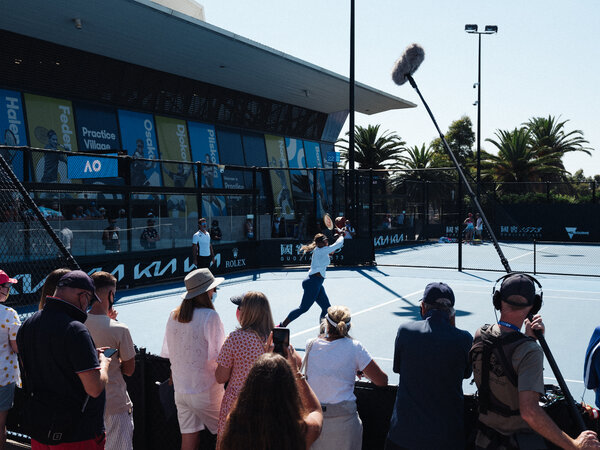 “It’s been really fun to have the crowd back, especially here,” Serena Williams said after she beat Anastasia Potapova in straight sets in the third round Friday. “But, you know what, at the end of the day we have to do what’s best. Hopefully it will be all right.”

I am here to tell you it won’t be. After what I witnessed during the first five days, it’s going to be terrible, without the essential dynamics that make sports the ultimate in improvisational theater.

Nick Kyrgios, the tennis antihero everywhere except Australia, where he is beloved, rode the fans to a miracle Wednesday night. He saved two match points in the fourth set against Ugo Humbert, the rising 22-year-old Frenchmen. Then he edged Humbert in the fifth set in front of an explosive crowd that never gave up on its hometown hero.

Kyrgios is the rare tennis player who brings in rugby fans. They screamed their heads off to keep Kyrgios alive and Humbert, the No. 29 seed, on edge until the very last point.

“Half-packed and it felt like it was a full stadium,” Kyrgios said. “I got goose bumps toward the end.”

Humbert lost those two match points, even though he was serving. He heard the fireworks from the seats a few feet away. As he watched Kyrgios both encourage it and soak it all in, his eyes appeared to fill with fear. There was another set to play, but the crowd was not going to let Humbert get out alive.

It is not a stretch to say that Humbert wins that match easily on a quiet court.

Kyrgios and his crew were back at it Friday night, when he took on Dominic Thiem of Austria, the reigning United States Open champion. The roars started as Kyrgios broke Thiem in the first game. As the crowd bellowed, Kyrgios waved his arms and cupped his ear, signaling to his fans that if he had any chance against the machine-like No. 3 seed, they were it.

And so began three-plus hours of interactive drama, with all the seat-banging, taunting and fist-pumping needed for someone who has barely played in a year to stay competitive with one of the best players on the planet. As the match stretched into the fifth set and past 10:30 p.m., a strange clock watching began, because fans were supposed to be home and observing lockdown by midnight.

So, here is one big reveal of the past week: All those star athletes who have always insisted they are so locked in that they do not hear the crowd? Well, it seems pretty clear they have been lying.

Here was Novak Djokovic, who has won this championship eight times. He has described Rod Laver Arena as his backyard. He was getting ready to play a game the other day, when a clump of women with a Serbian flag stood up and serenaded him with the “Ole-Ole” tune, culminating with, “Novak Djokovic is hot, hot, hot!”

Djokovic gave up on trying to play cool. He stepped back from the court, started giggling, then shook his head to regain his focus.

Here was Ajla Tomljanovic of Australia, trying to serve out the third set for what would have likely been the biggest win of her career, an upset of Simona Halep, the No. 2 seed. She was in front of a hometown crowd that carried her all night but couldn’t will her to victory.

“I felt that rush of people just cheering for you,” Tomljanovich said, her voice breaking following the loss. “I’m afraid to say it, but it could be the highlight of the year with the atmosphere and the crowd.”

She is not the only one. I do not know what I am dreading more about the end of this assignment — the last freezing month of a winter in the Northeast, or the largely empty version of sports that the pandemic has wrought.

It’s something, yes, but it is not sports.