For the first time in six years, the Australian swimming team's world titles campaign may not be seen on free to air television at home.

The stage is set for the Dolphins to throw down the gauntlet to powerhouse United States at next week's championships in Gwangju, South Korea. 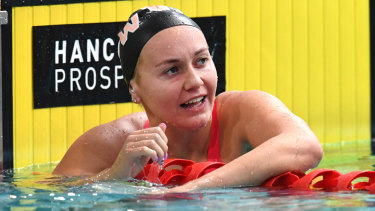 Yet it remains to be seen if anyone will witness it after Australian broadcasters baulked at world body FINA's prohibitive rights TV coverage deal.

Swimming Australia (SA) has officially expressed their concern after the TV swimming rights for the eight-day 2019 FINA world championships which start on July 21 had not been purchased at home.

"We know this is important to Australian swimming fans and also to growing the sport globally," SA CEO Leigh Russell said.

"We are currently in discussions with FINA regarding alternative options for viewing the broadcast in Australia and hope to be in a position to provide an update soon."

It would mark the first time since the 2013 world titles in Barcelona that Australian viewers have not been able to watch their team on live television coverage.

The only other time Australians had not been able to watch the Dolphins compete at a world titles was back in 1986.

Network Seven in Australia has the rights for swimming until 2025 but that deal only included the 2015 and 2017 world championships – not beyond.

Yet the 2019 world titles loomed as a ratings bonanza for Seven.

Australia has not claimed the world No.1 swimming ranking since 2001.

Yet the Dolphins team appeared primed to threaten the all-conquering Americans in South Korea with four No.1 ranked swimmers and another six classed in the top three ahead of the titles.

Then again, it seems Australia is not the only country struggling to strike a TV deal over the world titles.

Swimming World website claimed European Broadcast Union which includes the likes of the BBC have had reservations over whether they can afford the full rights package demanded by FINA.