Talks between the Los Angeles Lakers and Tyronn Lue to install Lue as the team’s head coach abruptly collapsed Wednesday, according to two people familiar with the negotiations.

The sides were unable to agree on contract terms, according to the people, with the Lakers willing to offer Lue only a three-year deal worth nearly $20 million — matching the time remaining on LeBron James’s contract with the team. Lue wanted a longer deal more in line with his status as a championship-winning coach.

Also among the factors leading to the breakdown was the insistence of Lakers management to have final say over the choice of Lue’s assistant coaches, according to the people, who were not authorized to discuss the situation publicly.

The Los Angeles Times first reported Wednesday that the Lakers and Lue had walked away from each other. It was not immediately clear whether there was any hope of reviving negotiations.

Lue and Monty Williams, the former New Orleans Pelicans coach, quickly emerged as the two finalists for the post, which became open when the Lakers mutually parted ways with Luke Walton on April 12. Shortly thereafter, Walton struck a deal to coach the Sacramento Kings.

Having coached James to three successive trips to the N.B.A. finals in Cleveland, and to the Cavaliers’ first title in 2016, Lue was widely billed as the favorite to succeed Walton.

Lue was largely the favorite among Lakers officials as well — yet there was some resistance. Among the Lakers’ many advisers to the owner Jeanie Buss, at least two raised concerns that reuniting Lue with James would give James too much power in the organization, according to the people.

Aside from Lakers General Manager Rob Pelinka, Buss is known to rely heavily on Kurt Rambis, the former Lakers player and coach, for counsel, as well as on his wife, Linda Rambis, and on Tim Harris, the team’s chief operating officer.

Lue appeared to have a clear path to the job as of last Friday, when Williams and the Phoenix Suns reached terms on a reported five-year deal. Lue is the only Lakers candidate who has been offered the post. 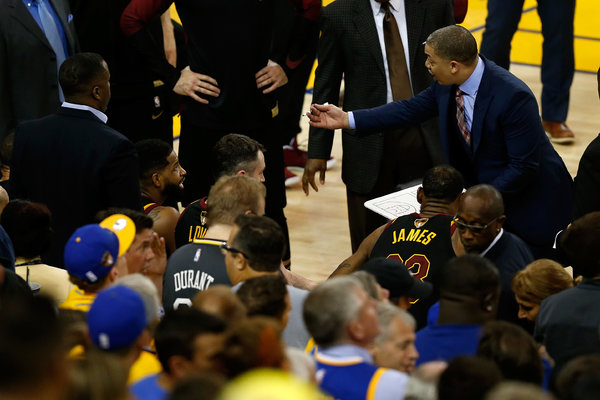 Lue was pictured over the weekend with a Lakers-themed birthday cake while in Las Vegas to watch the Canelo Álvarez vs. Daniel Jacobs fight — which James also attended. But negotiations have been bumpy all week, according to the people.

Lue, Williams, Kidd and the Miami Heat assistant coach Juwan Howard are the only candidates who have interviewed with the Lakers to date.

The Athletic reported Wednesday night that the Lakers now plan to interview Vogel; Mike Woodson, the former Knicks and Atlanta coach; and Lionel Hollins, the former Nets and Memphis coach.

The New York Times reported late in the regular season that dismay about Walton’s staff was among the reasons that Lakers management had soured on him before the abrupt resignation of Magic Johnson as team president on April 9.

In June 2014, Lue was hired by the Cavaliers as an assistant coach to work under David Blatt. Lue was promoted to head coach within a season and a half when the Cavaliers, despite an Eastern Conference-leading record of 30-11, dismissed Blatt in January 2016.

Lue, 42, is a former first-round draft pick who spent his first three N.B.A. seasons as a player with the Lakers. He won two championship rings as a lightly used reserve guard in 2000 and 2001, and he is one of only two coaches, along with Miami’s Erik Spoelstra, to lead James to a championship.

Lue posted a 128-77 record in two and a half seasons as James’s coach with the Cavaliers. After James joined the Lakers through free agency in July, Cleveland started the 2018-19 season 0-6 and dismissed Lue.

The Los Angeles Times reported last week that Phil Jackson, the former Lakers coach (and Buss’s former fiancé), and Johnson had told Buss that they endorsed the hiring of Lue.

In James’s debut season with the Lakers, L.A. rose to fourth in the Western Conference after a Christmas Day rout of the Golden State Warriors on the Warriors’ floor — but a groin strain James sustained in that victory started a spiral that left the Lakers with a record of 37-45 at season’s end.

James made eight consecutive trips to the N.B.A. finals, winning three of them, and 13 consecutive playoff appearances before the Lakers’ fade.