How to watch: The United States-Sweden game in Le Havre, France, is on Fox Sports and Telemundo (3 p.m. Eastern). To find out who has the TV rights to the match where you are, click here. 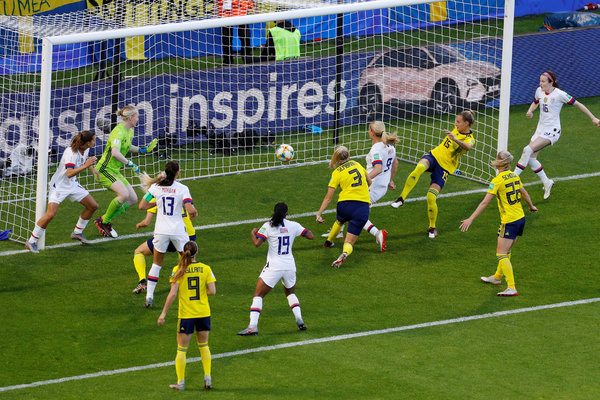 Sweden forced Naeher into a diving punch with a cross in added time, but it feels like 1-0 isn’t an accurate reflection of how well the United States controlled that half. They set the pace. They had the best chances, the best crosses. When they lost the ball, they just took it right back.

About the only thing that didn’t go better was the score. Sweden will be pleased to get a chance to regroup, and the get 15 minutes away from that ball-hawking pressure. But there will probably be more. And remember: Jill Ellis has fresh legs (Christen Press, Carli Lloyd< Mallory Pugh) straining to get into this one.

Sweden has six substitutes warming up. Changes coming at halftime?

Jakobsson and Asllani just had a nice exchange to get around the corner on the right wing, but Sweden — despite a couple of shots — has not been able to get out from under the unrelenting U.S. pressure.

Is Coach Peter Gerhardsson thinking about a switch at halftime? Who knows? But Jakobsson just stripped Dunn and rocketed a shot over the crossbar, so maybe Sweden’s players sense they better get something going.

Ball after ball scorched into the center.

The purpose that has made the United States the standout team of the group stage is on full display. Every ball is hit with intent, with power, with pace. Heath. Lavelle. Rapinoe. Mewis. All of them. They just look … dangerous. But the other thing about that kind of willful mentality — which has not been on display as completely even among the best teams here in France — is that players off the ball expect it.

Every ball is dangerous because there’s always someone running near post, or back post, or down the center channel, to meet it if it arrives.

Can the U.S. maintain this pace?

Yes, they’re winning every ball. Yes, they controlling it from sideline to sideline. But 90 minutes is a long time, and as the pace slows a bit here midway through the half, one can sense the Americans know going pedal to the pedal might have it own risks.

As if on cue, Sweden presses through Asllani, who fires a shot at Naeher from the right. She smothers that one just like the earlier one.

Hey look: Sweden is playing too!

Stina Blackstenius, the until-now-lonely center forward, takes Sweden’s first shot. But it’s from nearly 30 yards and, while hit with power, Naeher sees it all the way and smothers it.

Oddly, that might have been her first tough save of the tournament.

No let-up. The United States is all over Sweden.

Dunn fires a shot from the edge of the area after Ertz and Lavelle both win the ball in midfield as Sweden somehow, some way tries to get control of the game. Ellis clearly sent her team out breathing fire, and it’s showing.

The U.S. also is racing forward whenever it can and stretching Sweden to its limit by switching the ball. They’re trying to pull open the middle for Morgan. Might just be a matter of time.

GOAL!!!! Wow. A stunning start and a goal for Horan.

The U.S. won its first corner off some early pressure, and it looked as if Rapinoe had wasted it with a bouncing ball to the near post. But Sam Mewis reached for it and no one touched it until Lindsey Horan stabbed it in from 2 yards.

Atrocious defending for the Swedes — several players and Lindahl just let the ball careen through the goalmouth — and a great start for the U.S. The goal was almost a carbon copy of Horan’s first of the tournament, against Thailand.

U.S. on the front foot early

Lavelle and Morgan took the opening kickoff and just started dribbling upfield. That’s quite the message: here we come. We dare you to stop us.

Even when the U.S. lost the ball, their pressure was apparent. They want it.

The starting lineups: Back to the regulars (except one)

Jill Ellis used Sunday’s game against Chile to make sure that every field player she brought to France could go home and say, “I got to play.” But Sweden, and the knockout games that will come next, require her A team. So that’s what she has run out there, with one exception:

Julie Ertz is out with a hip problem that U.S. Soccer says isn’t serious — “We had to chain her to the bench to keep her out of this,” one official said — but it is serious enough that it’s causing her to miss an important World Cup game.

Her role will be filled by Sam Mewis, who scored twice in the American’s opening game. Expect her to be the more defensively focused member of the U.S. midfield, allowing Lindsey Horan and Rose Lavelle to maraud. (UPDATE: Horan has dropped at times to allow Mewis and Lavelle to push forward.)

The U.S. Lineup Resembles the One Against Thailand

The United States used two different lineups in its first two matches of the World Cup’s group stage. With the exception of Julie Ertz, who is injured, the starters Thursday against Sweden are the same as those in the match against Thailand, which the United States won, 13-0. 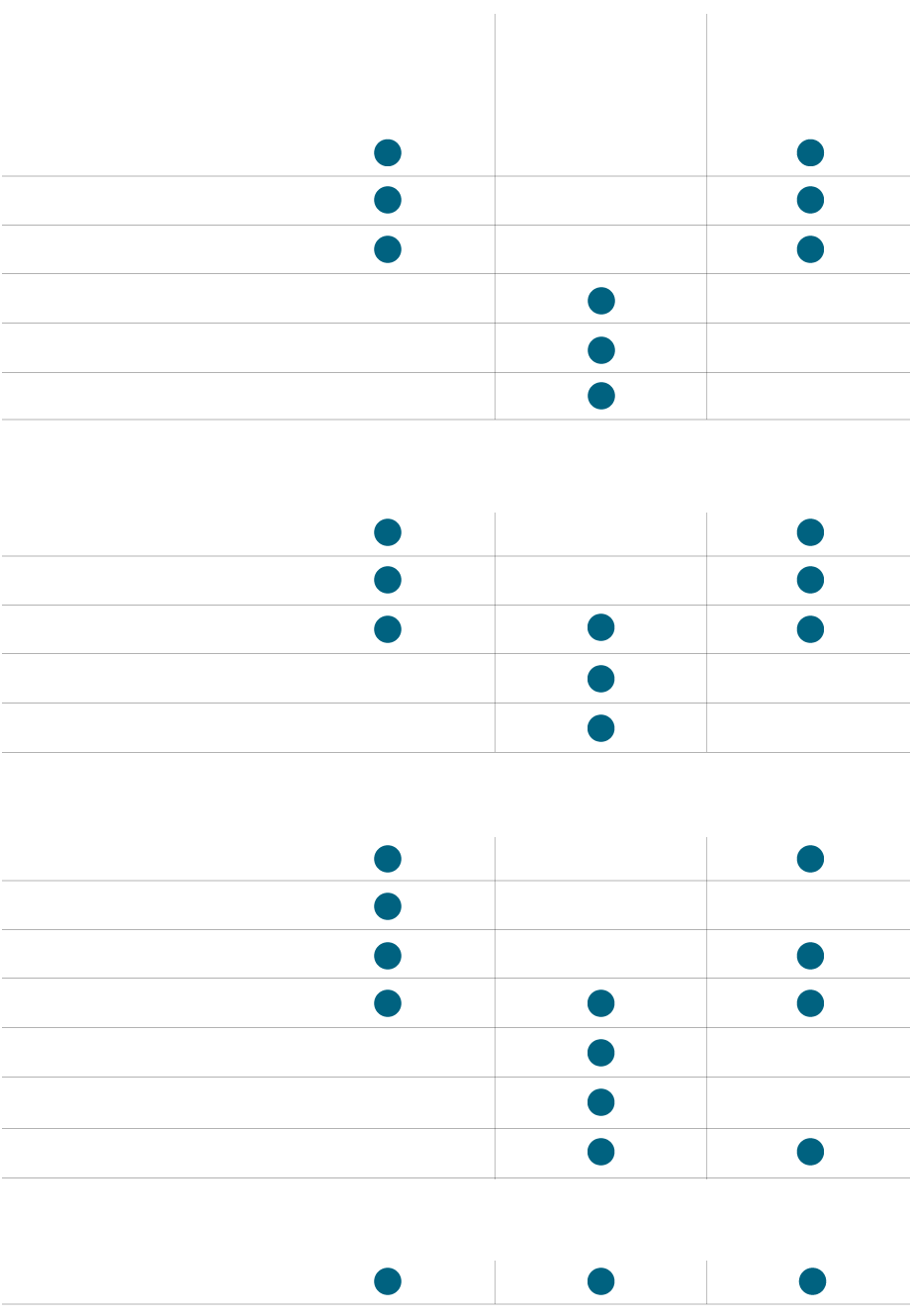 By The New York Times

A win or a tie gives the United States first place in Group F and a date with Spain in Reims on Monday in the round of 16. That will please the tourism office in Reims, which Andrew Keh noted today already has enjoyed a United States fan invasion once in this World Cup. The news may be less good for Spain, for obvious reasons.

The game looming beyond that is the one that everyone is talking about, however. It’s the one that everyone has talked about since the draw in December, actually: United States vs. France, the host nation, in the quarterfinals. It’s a game worthy of a final, and someone will be very unhappy to lose it. But a draw’s a draw.

As the group runner-up in this scenario, Sweden would get the second-place finisher in Group E, likely Canada or the Netherlands. It’s not an easy matchup by any means, but it’s probably a more favorable than running into France.

(Reminder: Sweden can flip that entire script with a win tonight, in which case it will play Spain — and then maybe France. A tie won’t do it, because of the Americans’ vastly superior goal difference in the group stage.)

Allison McCann of The Times has an intriguing article out today about the World Cup, and players’ personal style. Not their playing style, but the hair and (yes, some wear it) makeup. It can be a touchy topic with women’s athletes — and men are no less vain, which anyone who has seen Cristiano Ronaldo knows — but the players Allison spoke with were quite frank: they see their personal style as an extension of themselves, and they don’t particularly care about the opinions of others on the topic.

“Some watching the World Cup seem perplexed that athleticism and femininity could coexist — Is Alex Morgan wearing makeup? Were Sydney Leroux’s eyelashes fake? — or in [Nigeria’s Francisca] Ordega’s case, they were irritated. It’s grounded in antiquated notions of how women, and specifically female athletes, should present themselves — strong but not too strong, athletic yet feminine, feminine but not so feminine that they would wear lipstick.”

It’s a good piece, and worth your time. 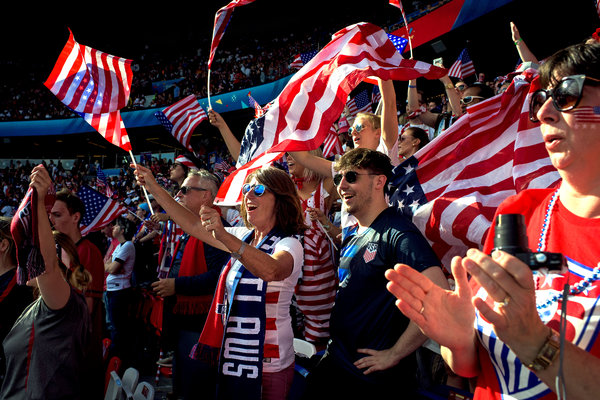 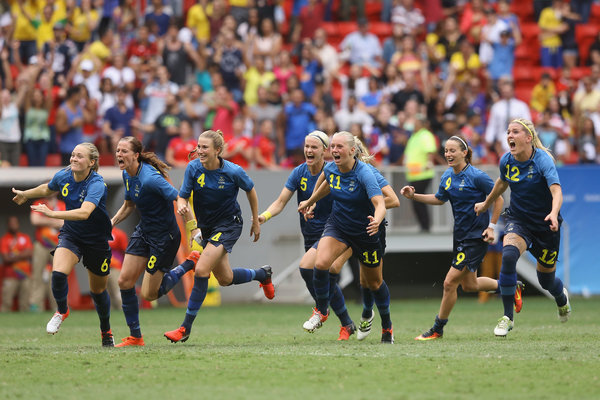 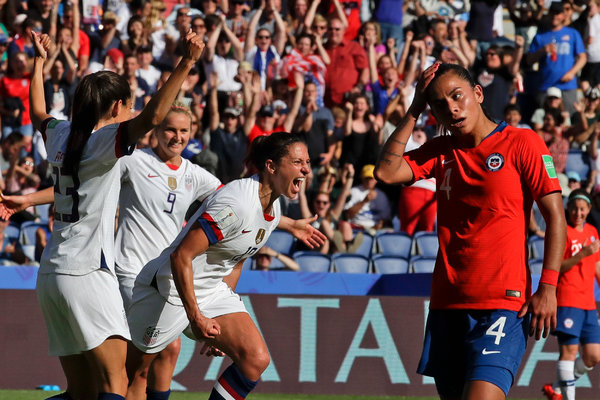