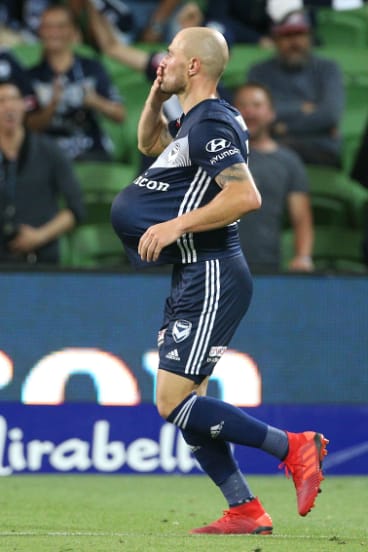 It was a game full of grunt and endeavour as both sides began at a strong tempo, one they sustained throughout the 90 minutes of a keenly contested, energetic game.

The pattern was set early, when Victory midfielder Terry Antonis, who has already chipped in with a handful of important goals this campaign, blasted over as early as the third minute.

Sixty seconds later Roy O'Donovan – who had earned a 10-match ban for his horror challenge on Victory goalkeeper Lawrence Thomas in that ill-tempered grand final last year – almost gave his side the lead with a snapshot on the turn which drew an excellent save from his old adversary.

O'Donovan then fired over as the Jets looked to show that whatever Victory could do, they could too.

Victory coach Kevin Muscat had sprung a selection surprise, leaving regular forward Kosta Barbarouses on the bench as part of a rotation policy to cope with the strains of playing four games in an 11-day period.

This game against the Jets came just four days after Victory's defeat in Adelaide, and Muscat's men must travel to Brisbane to face the Roar on Tuesday before hosting Wellington next Sunday. 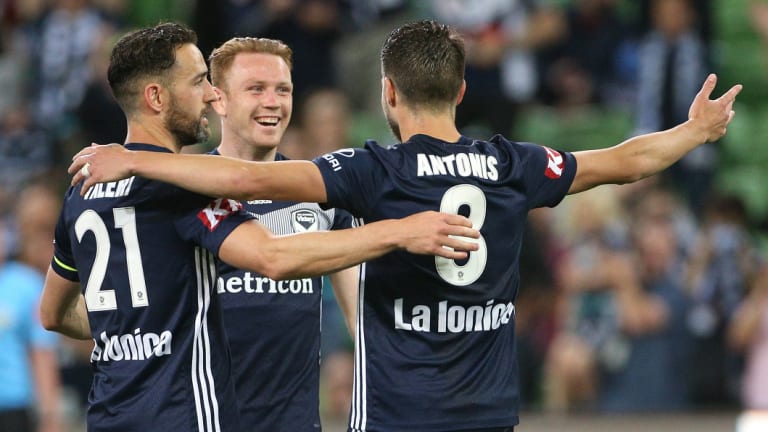 Victory has never sported such a tall forward line – Toivonen is 1.92m and Athiu 2.01m – and perhaps no other club in the history of the league has fielded such a lanky front pairing.

Athiu's height almost allowed him to strike in the eighth minute when he escaped his marker but could only get a glancing touch on Antonis' cross, sending the ball wide of Jets keeper Lewis Italiano.

Shortly after, Antonis volleyed wide as Victory looked to put their opponents on the back foot early.
Athiu has taken a long time to get fully attuned to the A-League since joining Victory some 18 months ago, but in this match he showed that his game had more to offer than just hard running and an aerial threat. 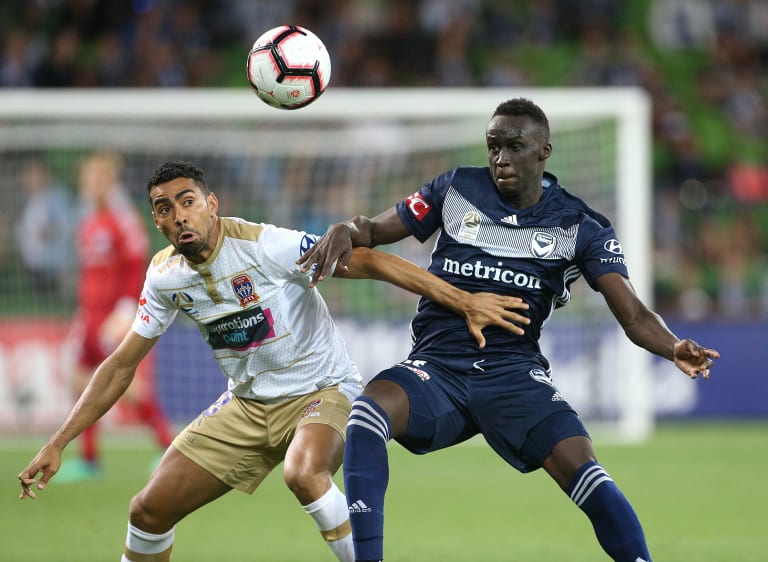 The ex-Heidelberg United striker showed some good touches and played his part as a target man, allowing Toivonen to drift into wide areas in search of space.

Newcastle's Brazilian import Jair tried to push his side forward and he nearly set up O'Donovan with another chance, Thomas having to rush off his line to head clear his lofted ball.

Dimi Petratos drove forward for the Jets, but his shot was always going wide. Steven Ugarkovic got on the end of a good build up and made an attempt on Victory's goal as the Jets moved the ball and broke with purpose.

At the other end Italiano had to be off his line smartly to deny Athiu's header, before Antonis fired over as the first half drew to a close.

The Victory faithful didn't have to wait long for the deadlock to be broken, as their side took the lead three minutes into the second half with a very well-worked goal by Antonis. 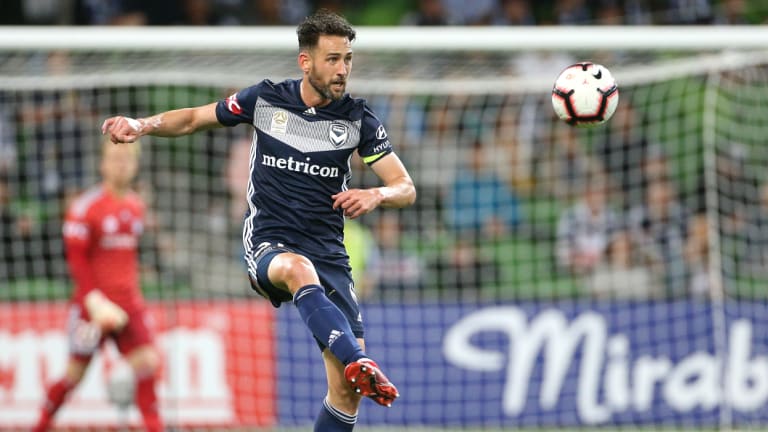 Troisi's deftly struck chipped pass found Athiu, whose neat volleyed back-flick fell invitingly to Antonis. The midfielder shifted the ball on to his left foot and then directed his effort well wide of Italiano's dive.

Jair tried to inspire the Jets, but his crossed ball from deep went unmet in the box. Former Victory defender Daniel Georgievski then went close, his rising shot from outside the penalty area tipped over athletically by Thomas.

The Brazilian had a wonderful opportunity to level things up in the 65th minute when he was set up by an Ugarkovic through ball, but could only scuff his shot wide from close range.

The Jets got the equaliser they deserved with 13 minutes remaining through substitute Kaine Shepherd, who swept home at the second attempt after Matthew Ridenton's original shot was blocked.

But their joy was short lived, as Victory got their noses in front once again in the 84th minute through a ferocious strike by Troisi. The former Socceroo was played through by Victory full back Corey Brown and lashed a tremendous drive from an acute angle into the roof of the net.