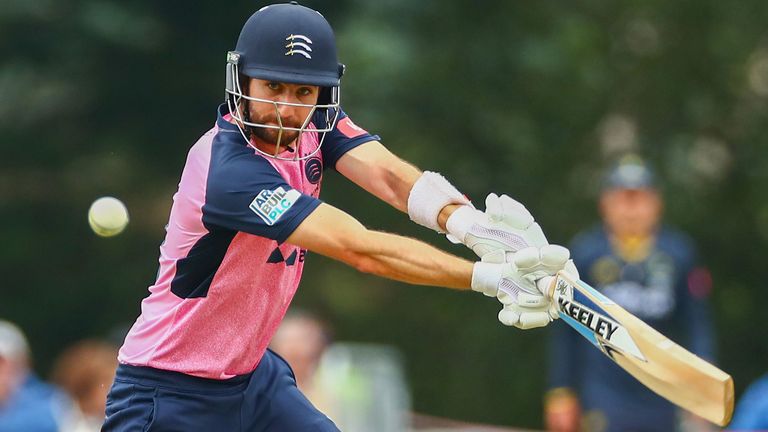 Stephen Eskinazi maintained his rich vein of form with an unbeaten 91 from 56 balls as Middlesex halted their four-match Vitality Blast losing streak with a seven-wicket victory over Glamorgan at Radlett.

Eskinazi, who had scored 102 not out and 64 in his two previous innings, dominated the Glamorgan bowling to steer his side to their target of 171 with 14 balls to spare.

Glamorgan, who were hampered by the loss of their two leading run-scorers in the tournament – Nick Selman, who tested positive for Covid-19 and Marnus Labuschagne, isolating after being in contact with the opener – had posted 170-8 earlier in the day.

Their reshuffled top order floundered with only David Lloyd, who hit 29 from 25 balls, threatening to gain momentum before they were briefly rescued by a Glamorgan-record seventh-wicket stand of 88 from 47 balls between Dan Douthwaite and James Weighell, who both recorded maiden Blast half-centuries.

? | EXCEPTIONAL ESKI
What a special week for @seskinazi! An amazing innings once again ?

Eskinazi immediately settled into his groove when Middlesex began their reply, dominating an opening stand of 55 with Joe Cracknell as he struck both Weighell and Prem Sisodiya for successive boundaries.

Douthwaite made the breakthrough at the end of the fifth over, having Cracknell caught behind off a thick edge, but Nick Gubbins proved to be an equally capable foil for Eskinazi as the duo added 68 from 52 balls.

Brett D’Oliveira and Riki Wessels powered Worcestershire Rapids to a seven-wicket victory over Leicestershire Foxes as they climbed back into the top four of the North Group.

The opening pair put on 103 – a record for any wicket by Worcestershire against the Foxes in T20 cricket – as they chased down a 157 target with five balls to spare.

D’Oliveira achieved a career-best score for the second successive game and it was the ideal way to celebrate his 100th T20 game for the Rapids. He eventually fell for 69 from 53 balls with eight fours with Wessels having made 46.

D’Oliveira, in particular, timed the ball sweetly as he completed his second successive half-century in the competition off 40 balls with six boundaries.

A straight six by Wessels off Gavin Griffiths brought up the century stand in 11.4 overs before the pair were parted soon after when Wessels was caught at deep mid-wicket off Callum Parkinson, who bowled his four overs for 20 runs.

Jake Libby was caught off a top edge at third man against Naveen-ul-Haq and D’Oliveira’s excellent knock ended when he pulled Griffiths to deep mid-wicket, but Worcestershire still eased home with room to spare.

We have to settle for a point. ? pic.twitter.com/SdxlZwO0Pz

Sussex Sharks were denied by the weather as their Vitality Blast match with Surrey was abandoned with just one more ball needed to provide a result.

Umpires Tim Robinson and Paul Baldwin led the players from the field 4.5 overs into the Sussex reply at Hove, with five overs needed for a Duckworth/Lewis decision.

Surrey had scored a challenging 175-7 and Sharks openers Luke Wright and Phil Salt set off at a frenetic pace in order to get ahead of the required rate.

They took 36 runs off the first three overs and at 43-1 off 4.5 over were well ahead on Duckworth/Lewis.

Kyle Jamieson struck Sussex skipper Wright on the helmet with the penultimate ball of the fifth over and, with rain falling and the light deteriorating, the umpires conferred and then left the field with the players as a number of the 2,500 crowd vented their frustration.