A baseball prospect getting the Call — the news that he is being promoted to the major leagues for the first time — is a momentous occasion. Managers and executives often take it upon themselves to deliver this news memorably, often with a prank, but the story that the San Diego Padres rookie Ryan Weathers shared of his experience is the quintessential tale of 2020.

A 20-year-old left-hander, Weathers was standing next to the club’s general manager, A.J. Preller, in the team’s hotel while waiting to grab a swab for the team’s daily Covid-19 tests when Preller posed a question: Which test was for the minor leaguers and which was for the big leaguers? Weathers said he didn’t know there was a difference, to which Preller replied, “Grab one from the big-league side today because you’re on the roster” for the playoffs.

Hours later, Weathers appeared in relief during Game 1 of the Padres’ National League division series against the Los Angeles Dodgers, becoming the fifth player to make his major league debut in a playoff game — and the third such player this postseason, after Minnesota Twins outfielder Alex Kirilloff in the wild-card round and Tampa Bay Rays pitcher Shane McClanahan in his American League division series against the Yankees.

Oakland A’s infielder Mark Kiger was the first to do so, during the 2006 A.L. Championship Series, and Kansas City Royals shortstop Adalberto Mondesi was next, in the 2015 World Series.

“I couldn’t really feel my body for the whole first inning, but it was a lot of fun,” Weathers said, before adding: “I think the only thing that went through my head was, ‘I’m in the big leagues right now.’”

Weathers, who had never pitched above Class A before facing the Dodgers’ star-laden lineup, acquitted himself well, throwing one and a third scoreless innings, even if he was only partially aware of the experience. He also confessed to reporters that he did not realize Dodgers shortstop Corey Seager had swung at the first pitch he threw.

All three debutants in this postseason were former first-round picks who had appeared on top-100 prospect lists, but none had reached Class AAA. Their professional timelines accelerated in 2020 because of a confluence of factors: the expanded rosters (up to 28 players this year); the format of the playoff series (with no days off); clubs’ willingness to be more aggressive in this unorthodox season; and the level of competition among the intermingled players at each organization’s alternate training site — a new feature for this season so clubs could keep reserve players in shape in the absence of a minor league season.

“I think it’s just a whole different environment now,” said Logan White, a Padres senior adviser and their director of player personnel. “At the alternate site, they’re competing against more polished guys who played Triple A and major leagues, so you’re seeing them in an even more competitive environment in some ways.”

That made scouting easier. No longer did a front office have to project a prospect’s performance against a higher level of play. The Rays’ McClanahan, who has only four starts at the Class AA level, cited the better competition at the club’s alternate site in Port Charlotte, Fla., as a major benefit. 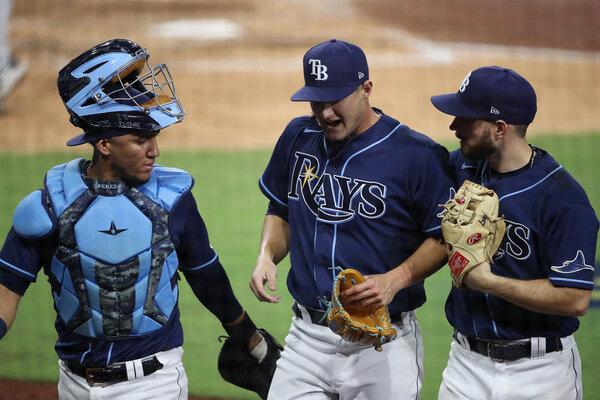 “It was a bunch of good guys who are starters anywhere else or competing for jobs anywhere else,” McClanahan said. “Good clubhouse guys, great staff. That was a very good atmosphere. Every single person there got better.”

He appeared twice in Tampa Bay’s A.L.D.S. series win against the Yankees, allowing one earned run over one and two-thirds innings while featuring a fastball that reached 99 m.p.h. — enough to earn him a spot on the Rays’ A.L.C.S. roster, too.

“Lot of power, got a lot to like,” Rays Manager Kevin Cash said. “I don’t know if it’s the ideal scenario to have your debut come in Game 1 of a D.S., but I was encouraged. Certainly, the stuff speaks for itself.”

Experiences varied. Kirilloff became the first player to make his debut while starting a playoff game when he batted sixth and played right field in the Twins’ second wild-card-round game against the Houston Astros. He singled in four at-bats while making a sliding catch to rob Josh Reddick of a hit.

“I didn’t find out until after I got to the field that I was going to start, so there wasn’t really much time to think about it,” Kirilloff said in a telephone interview. “I just said a prayer for peace and focus and all that before the game, and once I got out there I felt pretty OK, to be honest.”

None of the three had played a meaningful game in roughly 13 months, since their 2019 minor league seasons ended. Weathers moved back to his family home in Tennessee, working out and playing long toss with his sister and father to stay in shape. At the alternate sites, each tried to create a degree of normalcy during intrasquad scrimmages.

Kirilloff took to keeping his own statistics despite many of his at-bats coming during live batting sessions or with an incomplete fielding alignment. (One event with scorekeeping: a Twins home run derby during which Kirilloff lost in the final round to LaMonte Wade Jr.)

“It was more for me just to have an idea of how over all I was doing and to just hold myself accountable,” Kirilloff said. “I would jot down notes of what happened that day in the game, how many balls I hit hard.”

The three players will not receive any big-league service time for the days spent on the playoff roster, but at least immediate family members were able to attend their debuts in person, which wasn’t possible in 2020 until the postseason. McClanahan said his father’s first postgame comment was to jokingly chide him about the full-count walk he issued, to which the pitcher replied, “Hey, Dad, good to talk to you, too.”

David Weathers said his son’s blurry memory of his initial outing sounded familiar to his own experience while making his debut in 1991 — though on the day of Ryan Weathers’s first game, his parents did not relax until after their son’s first-pitch strike.

“We’d been a little bit nervous and antsy all day,” David Weathers said. “Especially today’s social media, they don’t have the glasses that we have to say, ‘OK, this is a 20-year-old making his debut in the postseason.’ In their eyes, this is just the postseason, so whoever you put out there better do the job.”

Even though all three either recorded a hit or struck out a batter in their debuts, they’ll have to complete those firsts again, as postseason stats aren’t counted in their career numbers.

Although Mondesi has become the Royals’ everyday shortstop, Oakland’s Kiger never played in the big leagues again. Kiger — whose first bit of fame came in the 2003 book “Moneyball,” in which he appeared on a list of eight players that the A’s executive Billy Beane was determined to draft — entered as a defensive replacement in two 2006 A.L.C.S. games. He recorded a putout while playing second base, but never batted. He completed three more minor league seasons, but never returned to the majors.

In 2015, the photographer Tabitha Soren published “Fantasy Life,” a collection of portraits from that famed A’s draft class. (Soren’s husband is Michael Lewis, who wrote “Moneyball.”) In that book, Kiger called himself “the modern-day Moonlight Graham,” referring to the old ballplayer whose similar career cameo was memorialized in the 1989 movie “Field of Dreams.”

Nothing is assured, for better or worse in baseball.

“If you were to have told me last year that I would have been pitching in the division series this year against the Dodgers,” Ryan Weathers said, “I probably would have called you crazy. But it’s 2020. Anything can happen.”