The Western Melbourne Group have been granted an A-League licence without a formal agreement in place to play games at GMHBA Stadium while their proposed new stadium at Tarneit is being built.

Although the Kardinia Park Trust has been in discussions with the consortium about playing games at the venue when they enter the competition in 2019-2020, their games will need to fit in with the needs of their major tenants and annual events such as Big Bash games involving the Melbourne Renegades. 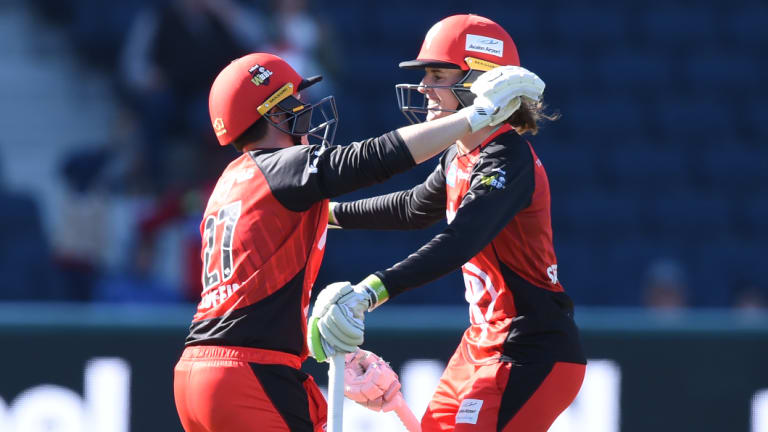 There are existing arrangements with other codes at GMHBA Stadium over the summer months, including cricket and football.Credit:AAP

The trust's CEO Michael Brown, who is set to depart the position in February next year after announcing his resignation earlier this week, said the A-League's decision to grant the licence to a club playing home games at a new stadium in Tarneit was good for the region but further talks were still necessary to determine exactly when the new team would play in Geelong.

"We have been in discussions with Western Melbourne about potentially playing some of their early season games at GMHBA Stadium until they build their stadium in Tarneit," Brown said.

"At this stage there is no formal agreement."

Geelong Football Club have their AFL, AFLW and VFL teams all using the venue for training and games with the Cats' AFLW team, which enters the AFLW competition in 2019, kicking off the season at GMHBA Stadium under lights in early February.

The club has been training in recent weeks at Deakin University while the surface is relaid.

The trust is also planning to complete the stadium redevelopment with the recently re-elected Andrews government pledging $102 million to the stage five redevelopment.

Discussions are still taking place as to when that redevelopment will start and what impact it will have on the stadium's availability.

Brown was confident the new A-League team would be able to play games at the venue, however he said the trust was conscious of existing arrangements.

"Whilst we are happy to assist and see this as a great opportunity for Western Melbourne, we are mindful of the needs of our current tenants and events such as BBL," Brown said.

Geelong CEO Brian Cook congratulated the Western Melbourne Group on their successful bid and was confident the AFL team and the A-League team could work together in the short term.

"I have known Steve Horvat (Western Melbourne Group) for a long time and look forward to discussions with him on ways we can potentially work with the group," Cook said.