It was a supersize wild-card weekend, with the N.F.L.’s expanded playoff format requiring six games, rather than four, in the first two days of the postseason. There were no surprises in the results of the first five games, but most were close enough to provide plenty of entertainment.

Here’s what we learned:

It is time for a new Lamar Jackson narrative. It was hard to tell if the Baltimore Ravens were a top contender or a beneficiary of one of the N.F.L.’s weakest schedules over the final five weeks of the regular season. And after they had consecutive seasons that each ended in a disappointing playoff loss, there were those who questioned whether Jackson’s run-heavy style could translate to postseason success. After watching Baltimore race for 236 yards on the ground in a 20-13 win on the road against the Tennessee Titans on Sunday, those narratives can be retired. Baltimore won’t surprise anyone, but knowing what’s coming is a lot different from knowing how to stop it.

With his first playoff win and his team’s defense playing well, Jackson should finally be able to relax. That should terrify opponents, because Jackson, who rushed for 136 yards on Sunday and 143 in last year’s playoff loss to Tennessee, already owns two of the top three playoff rushing performances by a quarterback in N.F.L. history.

Nickelodeon should broadcast a game every week. Keeping things interesting when a heavily favored team wins easily can be hard, but a broadcast on Nick aimed at children managed to do just that. The announcers explained the game at a base level, but had entertaining insights along the way, as when the former N.F.L. player Nate Burleson described being tackled as feeling like “falling down wooden stairs.” As for the actual game, the New Orleans Saints barely broke a sweat while beating the Chicago Bears, 21-9. The only real misstep of the broadcast was a fan vote leading to Mitchell Trubisky, the losing quarterback, being named the game’s most valuable player. Over all, the innovations led to the least competitive game of the weekend being must-see TV. (Related: The writer of this article has two children.) 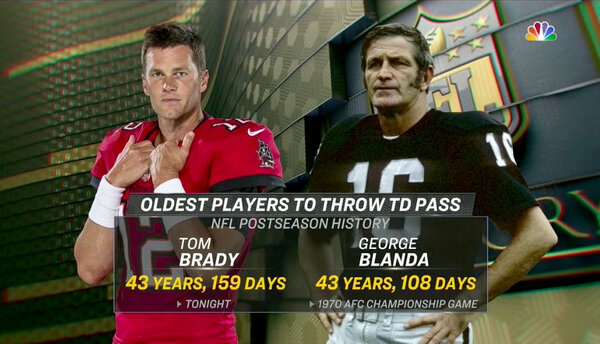 Tom Brady is leaving no stone unturned. Brady, the quarterback of the Tampa Bay Buccaneers (that still sounds weird), already had plenty of N.F.L. records, but he broke one on Saturday that had lasted for 50 years, passing George Blanda to become the oldest player to throw a touchdown pass in a playoff game. Brady, at 43 years 159 days, threw two touchdown passes in Tampa Bay’s 31-23 win on Saturday over the Washington Football Team, and will most likely push the record further next weekend in the divisional round. As Drew Brees is the only other active quarterback in his 40s, and is potentially retiring after this season, Brady’s record — should he ever choose to stop playing — could be safe for quite some time.

Brady’s triumph led to jokes on social media after an NBC graphic showed how much younger Brady looks than Blanda did in 1971 (above). But Blanda’s fans still have some bragging rights: A versatile player for the Oakland Raiders, he not only had two touchdown passes in that A.F.C. championship game against the Baltimore Colts, but he also kicked the extra point after both touchdowns and connected on a 48-yard field goal.

These are not the 2018 Los Angeles Rams. In the 2018 season, Coach Sean McVay used a groundbreaking offense — and a fairly mediocre defense — to lead the Rams to the Super Bowl. The script has officially been flipped, with Los Angeles going as far as its defense can take it. Facing the Seattle Seahawks, who finished eighth in the N.F.L. in scoring, Aaron Donald and the Rams’ front seven put a ton of pressure on Russell Wilson, sacking him five times in the Rams’ 30-20 victory on Saturday. The Rams also showed an aggressive streak when cornerback Darious Williams burst through a pair of Seattle players at the line of scrimmage to intercept a pass by Wilson, returning it 42 yards for a touchdown.

Strong performances from the team’s defense and its rookie running back Cam Akers (28 carries for 131 yards and a touchdown) were particularly important since quarterback Jared Goff appeared limited after recent surgery on the thumb of his throwing hand.

The Bills aren’t going to make it easy — for them or their opponents. A 27-24 victory over the Indianapolis Colts on Saturday gave Buffalo its first playoff win since 1995. The game managed to show off the Bills’ strengths and weaknesses. Quarterback Josh Allen (324 yards passing, 54 yards rushing, three total touchdowns) and wide receiver Stefon Diggs (128 yards receiving and a touchdown) were dominant, and safety Micah Hyde saved the day with a late pass deflection, but alarm bells should be ringing that Buffalo’s defense allowed 472 yards of total offense and nearly gave up what had been a 24-10 lead in the fourth quarter. The Bills did not have a sack or a turnover in the game, and got almost no contribution from the team’s running backs. As good as Allen and Diggs are, the rest of the team will need to step up for this run to continue.

The expanded playoffs are a major time investment. As some feared, expanding the playoff field to 14 teams, from 12, led to an 8-8 squad — the Chicago Bears — qualifying for postseason play. In addition, the N.F.C. East was won by the 7-9 Washington Football Team, leaving only five of the N.F.C.’s entrants with winning records. But this year’s A.F.C. provided a good argument for the format, because it allowed the formidable 11-5 Indianapolis Colts to qualify. The conference even had a team with a winning record — the 10-6 Miami Dolphins — that did not make the playoffs.

The ultimate goal of the Super Wild Card Weekend, however, was money. Games were broadcast across multiple networks and streaming platforms for more than 10 hours on both days. With the smaller in-person crowds, you could almost hear the league’s cash registers welcoming that boost in advertising revenue.

This weekend, we said goodbye to the following teams. Each team has things it can look forward to and things it can work on heading into next season.

In the first half of the season, the Seahawks appeared to have a Super Bowl-quality offense and a high-school-level defense. While Seattle ironed out many of its defensive woes, it was Russell Wilson and the team’s offense that looked overwhelmed on Saturday — that happens a lot against the Los Angeles Rams’ underrated defense. Where does that leave the Seahawks? They need to find upgrades on the offensive line to protect Wilson and should probably go back and study the tape of the early-season games in which they seemed far more aggressive with their passing game.

Derrick Henry had an incredible season, rushing for 2,027 yards and becoming the first player to repeat as the N.F.L.’s rushing champion in more than a decade. A blend of his running and Ryan Tannehill’s passing led the Titans to the fourth-most points in the N.F.L. While many will focus on Henry’s disappointing effort in Sunday’s loss, Tennessee’s biggest issue this season was its defense. The easiest way to support Henry and Tannehill is to not make it imperative that they score on every drive.

There were a lot of positives for the Colts this season. Some shrewd off-season moves led to the team having its best record since 2014 — and just its second playoff appearance since then. Indianapolis is unlikely to get similar turn-back-the-clock performances from quarterback Philip Rivers and cornerback Xavier Rhodes going forward, but the team’s trading for defensive tackle DeForest Buckner and drafting of running back Jonathan Taylor should set the Colts up for more success next season.

What a weird season. Chicago got off to a superficially strong start, was badly exposed by a midseason losing streak, rallied to make the playoffs and then was overwhelmed by the New Orleans Saints. A No. 8 seed being crushed by a No. 2 seed isn’t exactly an endorsement of the expanded playoff structure, but the Bears could probably be a relevant team fairly quickly provided that they admit Mitchell Trubisky is not their long-term answer at quarterback.

Laugh all you want about the team’s record — Washington matched the 2010 Seattle Seahawks for the worst record of a playoff team in the 16-game era — but the Footballers are walking away with their heads held high and their future looking bright. The rookie defensive end Chase Young is a top-shelf disrupter and poised to lead his unit into relevance for years. On offense, the team has found its answers at running back (Antonio Gibson) and wide receiver (Terry McLaurin). And after a gutsy performance against Tampa Bay, where he impressed with his arm and his legs, Taylor Heinicke should get some serious consideration as the team’s quarterback of the future.