The A.F.C. appears to have more than two top dogs, predicted blowouts often become actual blowouts, Frank Gore is still out there thriving and Daniel Jones won an N.F.L. game just five months after being openly mocked on draft night.

There was a lot to take in when it came to Week 3. Here’s what we learned.

The object in Kansas City’s rearview mirror is closer than it appears. The Chiefs, thanks to another three-touchdown performance from Patrick Mahomes, got a win at home, improving to 3-0. That’s the good part. But the Ravens, using a powerhouse running game and a Lamar Jackson passing attack that defies description, outscored the Chiefs by 22-10 in the second half, only to lose, 33-28. A scary thought for the Chiefs: The Ravens failed on three 2-point conversion attempts. Had those plays gone the other way — putting 6 more points on the board — there would be a very different conversation around this game. 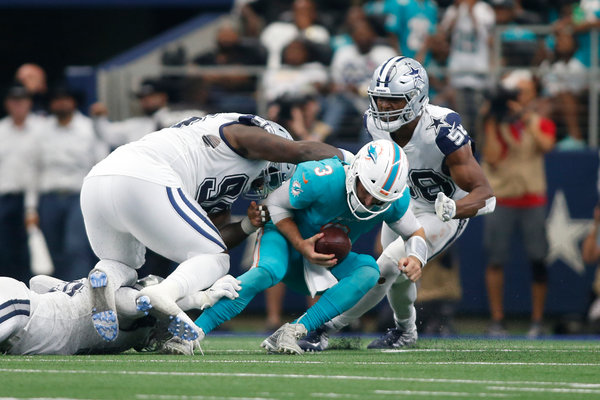 The Cowboys and the Patriots (and the Dolphins and the Jets) are who we thought they would be. As everyone predicted, Dallas continued Miami’s misery, winning by 31-6, and New England easily beat the Jets at home, 30-14. The Cowboys’ defense held Miami without a touchdown and Ezekiel Elliott’s backup, Tony Pollard, ran for more than 100 yards (as did Elliott). The Patriots had things nearly as easy, leading, 20-0, at halftime, but lost Julian Edelman to an injury and allowed two touchdowns off turnovers — the Jets’ first touchdowns in New England since 2015. After having been predicted by oddsmakers to combine for a 44.5-point margin of victory, the Cowboys and the Patriots combined to win only by 41.

Daniel Jones looked fantastic, and he wasn’t alone. Jones, who took over from Eli Manning as the Giants’ starting quarterback, was the most talked about of the eight training camp backups who started at quarterback this week, and despite his draft day detractors he looked like a keeper in a 32-31 win over Tampa Bay. But Jones had competition for the best week of the various backups. Carolina’s Kyle Allen threw four touchdown passes in a win over Arizona, Teddy Bridgewater was efficient in the Saints’ win in Seattle, Jacoby Brissett continued his strong start to the season in the Colts’ win over Atlanta, Mason Rudolph looked solid in the Steelers’ loss to San Francisco and Gardner Minshew led the Jaguars to a win over the Titans on Thursday.

Luke Falk of the Jets and Josh Rosen of the Dolphins would prefer we keep talking about those other guys.

Even a boring game can have an exciting end. The N.F.L.’s showcase game on Sunday night could not have been a bigger letdown, with Cleveland leading Los Angeles by 6-3 at halftime. Both quarterbacks threw multiple interceptions, neither team rushed for more than 100 yards and the game didn’t come close to living up to the day’s other action. The matchup was redeemed a bit in its final minutes, with Baker Mayfield getting Cleveland to a 1st-and-goal on the Rams’ 4-yard line with 43 seconds remaining. But his second interception of the day handed the Rams a 3-0 start to the season.

Frank Gore will outlast us all. The 36-year-old running back, still grinding in his 15th season, plowed through Cincinnati’s defense for a go-ahead 1-yard touchdown in the final two minutes of the Bills’ come-from-behind 21-17 victory over the Bengals, which improved Buffalo to 3-0. It was the 98th touchdown of Gore’s career — his first came on Oct. 23, 2005, when Buffalo’s starting quarterback, Josh Allen, was 9. Gore, fourth on the N.F.L.’s career rushing list with 14,912 yards, needs 357 more to catch Barry Sanders for third place. He is 3,443 short of Emmitt Smith for the top spot, which is not at all realistic, but shouldn’t be counted out entirely until Gore says the words “I retire.”

The Packers can rely on their … defense? It’s a statement rarely uttered in the Aaron Rodgers era (or large parts of the Brett Favre era), but Green Bay’s 3-0 start has been powered largely by the team’s rebuilt defense. Preston Smith had three sacks, Za’Darius Smith had two and the Packers, thanks to three turnovers, held Denver to 17 points — the third straight game a Green Bay opponent has been held to fewer than 20. That’s plenty, especially when Rodgers connects with Marquez Valdes-Scantling for a 40-yard bomb of a touchdown on the game’s opening drive and Aaron Jones runs in two more scores.

It is time to push the panic button in Philadelphia. Taken individually, a loss to Atlanta on the road and a mild home upset against Detroit might not be too worrisome, but those results coming in back-to-back weeks has the Eagles, a team that won a Super Bowl two seasons ago, looking remarkably vulnerable. Carson Wentz will now take his team on the road to Green Bay trying to avoid a 1-3 start. There is a silver lining: Last year, five teams started 1-2 and still made the playoffs, including the Patriots, who won the Super Bowl.

Antonio Brown, the free-agent wide receiver recently released by the New England Patriots, declared on Sunday that he would no longer play in the N.F.L.

Brown, who is being investigated by the N.F.L. for multiple accusations of inappropriate sexual behavior, including rape, was released by New England on Friday, less than a week after his first game with the team. Previously, he was released by the Oakland Raiders on Sept. 7, and his announced intention to no longer play in the league included a call for the N.F.L. Players’ Association to hold the league accountable for the money he believes he is still owed by both teams.

Brown’s message, posted to his Twitter account, pointed to his treatment by the league’s team owners as motivation for the decision. It is not clear whether Brown had received any interest from N.F.L. teams to continue his career.

Daniel Jones Runs the Giants to a Win

In his first N.F.L. start, Daniel Jones led the Giants to a 32-31 win over the Tampa Bay Buccaneers, earning the rookie quarterback heaps of praise from coaches and teammates.

“Daniel is not afraid of anything on the field; he’s always got this poise,” said wide receiver Sterling Shepard, who was running a pass pattern in the end zone when Jones took off for the goal line on his game-winning touchdown. “If people don’t know that about him, maybe they do now.”

Asked if he had to calm Jones down when the Giants offense sputtered badly on successive drives in the third and fourth quarters, Coach Pat Shurmur shook his head side to side.

“No,” the coach answered. “He’s mature beyond all our years.”

One* Sentence About Every Game

*Except when it takes two.

Vikings 34, Raiders 14: Running the ball may be out of fashion, but Minnesota is loving Dalvin Cook, who has piled up 375 yards on the ground in three games.

Chiefs 33, Ravens 28: Patrick Mahomes and Lamar Jackson justifiably get the headlines, but Chiefs running back LeSean McCoy, who was working his way through an ankle injury, was a key player in this game, scoring two touchdowns.

Cowboys 31, Dolphins 6: Dak Prescott’s nine passing touchdowns through three weeks is a Cowboys franchise record — Tony Romo (2007) and Roger Staubach (1978) each had eight — but he’ll need three next week against New Orleans to stay ahead of Romo’s pace that season, when he had 11 touchdowns through four games.

Patriots 30, Jets 14: The Patriots dealt with the drama of Antonio Brown, the absence of James White — whose wife was expected to give birth — and what could be a serious injury to Julian Edelman and none of it mattered in a game that was not nearly as close as the final score indicated.

Lions 27, Eagles 24: Jamal Agnew’s fumbles in Detroit’s first two games are a distant memory after his 100-yard kickoff return set the tone in a win on the road.

Colts 27, Falcons 24: Colts Coach Frank Reich is thrilled with the stellar play this season by quarterback Jacoby Brissett, saying “This is what we expected and he delivered.” Adam Vinatieri, the Indianapolis kicker who chose not to retire after his struggles in Weeks 1 and 2, had a good game as well.

Bills 21, Bengals 17: Cincinnati may have had a better chance in this game if the team, which had been mocked for its empty yardage in Weeks 1 and 2, had managed more than 77 yards in the first half.

49ers 24, Steelers 20: A 3-0 start papers over a lot of flaws and if you don’t focus on San Francisco’s lowly competition in those wins, the five turnovers the team had on Sunday or the fact that they needed a last-second comeback to beat Pittsburgh despite Ben Roethlisberger being out, then everything is wonderful.

Panthers 38, Cardinals 20: Kyle Allen and Kyler Murray were teammates in the same quarterback room at Texas A&M in 2015 but things have gone considerably better for Murray in the four years since then. Not on Sunday, however, as Allen threw four touchdown passes, easily outdueling Murray, the 2018 Heisman Trophy winner.

Giants 32, Buccaneers 31: Well, that was exciting.

Saints 33, Seahawks 27: There are plenty of good takeaways from a game that New Orleans won with a backup quarterback in a hostile road environment, but the Saints might want to take a hard look at what went wrong with their defense in the fourth quarter: Seattle’s offense, which had been dormant all game, scored 20 points in the final 15 minutes.

Rams 20, Browns 13: After so much off-season hype, the Browns are 1-2, Baker Mayfield is struggling with interceptions and Cleveland’s defense does not look nearly as good as some had hoped. In short, they seem a lot like the Browns. 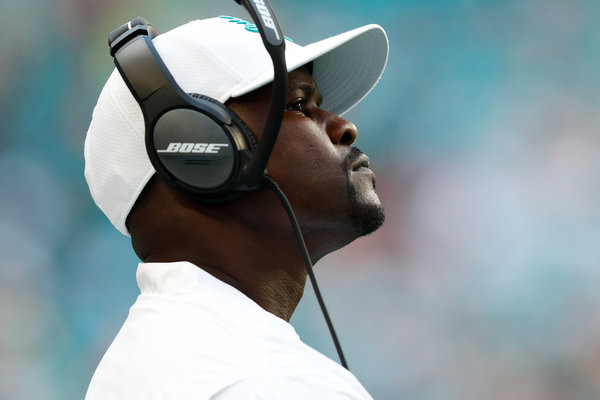 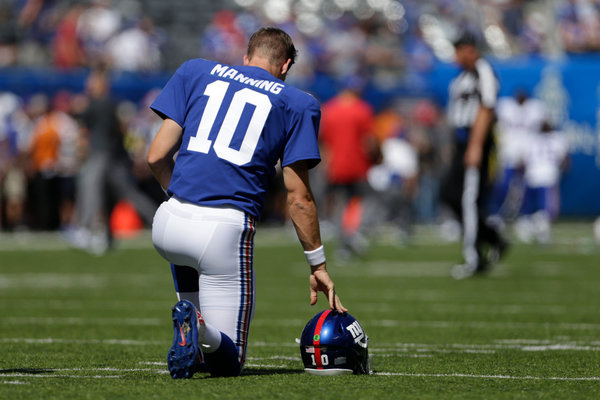 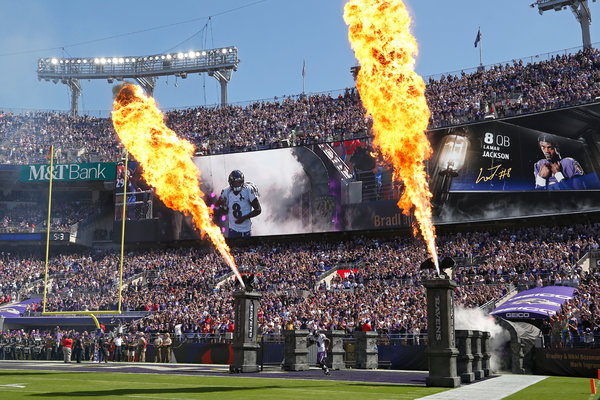 Benjamin Hoffman is a senior staff editor and regular contributor to the Keeping Score column in sports. He joined The Times in 2005. @BenHoffmanNYT • Facebook