Federal authorities say since the rope had been there for months, there was no way anyone could have known the stall would be assigned to NASCAR driver Bubba Wallace this past week.

NASCAR driver Bubba Wallace has been in the news after a noose was found in his garage stall at Talladega Superspeedway, although an FBI investigation found it to be a garage pull that was installed before the stall was assigned to Wallace.

"I was relieved just like many others to know that it wasn't targeted towards me," Wallace told "TODAY" in June. "But it's still frustrating to know that people are always going to test you and always just going to try and debunk you and that's what I'm trying to wrap my head around now."

He was also involved with NASCAR's decision to ban the Confederate battle flag from its events.

The ban was announced after Wallace, the NASCAR Cup Series' only black driver, and others called on the stock car circuit to ban the flag. The sight of the Confederate flag at NASCAR events was a divisive topic among fans in recent years, with critics arguing it is a symbol of slavery and racial oppression.

President Trump criticized Wallace for his handling of the incident — Wallace himself never saw the rope that was described as a noose.

"Has Bubba Wallace apologized to all of those great NASCAR drivers [and] officials who came to his aid, stood by his side, [and] were willing to sacrifice everything for him, only to find out that the whole thing was just another HOAX? That [and] Flag decision has caused lowest ratings EVER!" Trump wrote on Twitter in July.

Wallace, 26, is NASCAR's only African American driver on its top circuit. He's in his third season driving the No. 43 Chevrolet for Richard Petty Motorsports, according to his NASCAR bio.

Wallace was born in Mobile, Alabama, but his family relocated to Concord, North Carolina, when he was a toddler, according to AL.com. He started driving at age 9, AL.com reported. 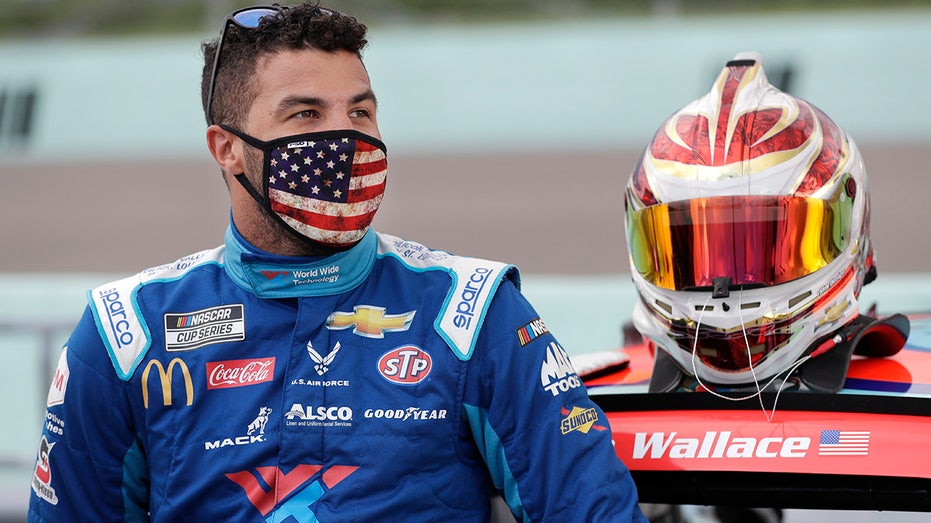 Wallace has six Gander RV & Outdoors Truck Series wins. In 2013 he became the first black driver to win a NASCAR race after Hall of Famer Wendell Scott, who died in 1990.

Wallace is dating Amanda Carter, who is also based near Charlotte, North Carolina, according to her Instagram.

"I am so thankful that this was not a purposeful act, I am so thankful you are safe," Carter wrote on Instagram in June. "For those who have stood with Bubba, keep standing."

In the wake of the noose controversy, NASCAR employees will receive sensitivity and unconscious bias training, president Steve Phelps said in June.