As we have been watching the first Test, there would be 10 to 15 Australian first-class players thinking they should be out on Adelaide Oval representing their nation.

I was one of them many years ago. It is an awful time. You don’t want to watch, but begrudgingly you do. 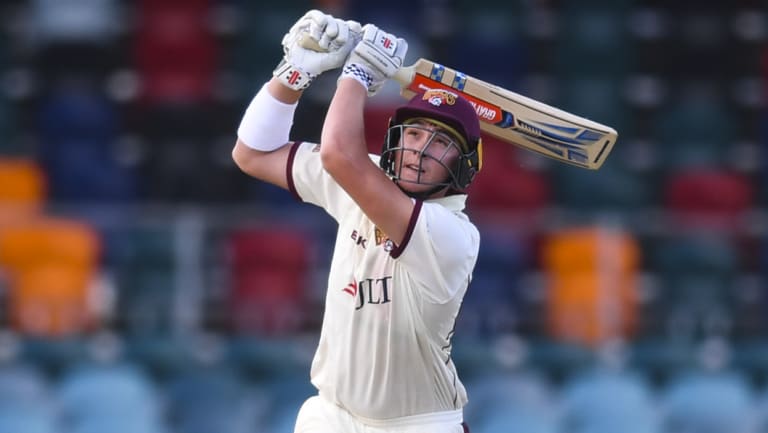 Can Matt Renshaw convert his county and grade cricket success into bags of Shield runs?Credit:AAP

Everyone has a reason for their non-selection. My favourite – "I'm not from NSW" – pops up regularly. "I was injured at a time when the national selectors were looking" is a strong second favourite. Other notables: "My state captain is batting me in the wrong spot" or "I am not getting the new ball".

There are millions of reasons, but no new ones. I have heard them all.

The players who did miss out on selection need to find an honest answer to this main question: why did I not get picked? They all know why, but they just won’t admit it.

This is a time for complete honesty.What perceptions do selectors and the whole of the first-class scene have of me as a person and as a cricketer? Am I fit enough? What is working in my game? What part of my game is letting me down? Does my attitude fit into the current climate of being a "good bloke"? What sacrifices am I prepared to make to go the whole way? And who can help me get there?

Many a player has asked me what selectors look for. Selectors can have some weird theories, I can tell you! They are all different, but the normal answer is hundreds and five-wicket hauls.

I like to see if the batsman has time to play his shots or if he look rushed. Does he have options when the ball has landed on its length? How good are his defensive structures? What are his game plans and how good is his match awareness? How does he set up a bowler to score?

Let's look at the Indian great Sachin Tendulkar who normally averaged close to 180 balls to make a Test century. Did you know that 70 per cent of those deliveries Tendulkar faced resulted in defensive shots – forward, back or leaving the ball alone? 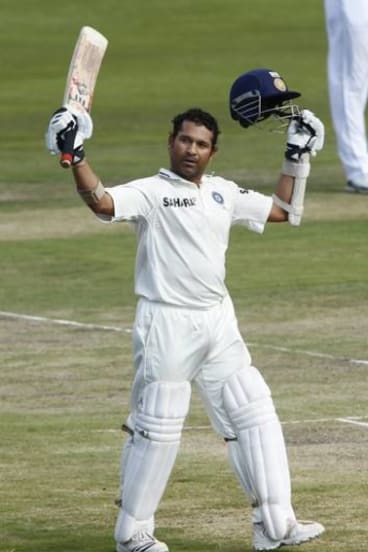 The most common mistake for any batsman is not watching for length. The greats normally get it right 95 per cent of the time. Everyone thinks reading the length of the quicks who bowl over 145km/h is tough. Actually, facing quality spin is even harder – particularly when the ball is turning square.

On the way to making a Test century, a batsman has to keep out about 10 quality balls and the question I ask any young batsman is: "Is your defence up to it?" Even the Indian great Rahul Dravid in his last Test series against Australia was bowled six times in eight innings because his forward defence, a strength throughout his decorated career, started to let him down. Matthew Hayden was the same.

A similar theory also applies to bowlers. Offensive skills for any quick bowler are pace, swinging the ball, cutting the ball and having a bowling plan. When things go bad, it is a failure of defensive structures such as bowling the proper line and length and having patience that will let them down. Bowlers start wicket chasing and ultimately start losing the plot. Just look at Glenn McGrath and Shane Warne. Both were amazing bowlers as they had amazing offensive skills, but under pressure they were able to bowl proper defensive lines and lengths. That is why they were great.

While this Test match is being played in Adelaide, I have no doubt that the selectors will be having one eye on this Test and another eye scouting. They will be hoping that their Plan A will do the job but they also will need a Plan B if it doesn’t.

My sources tell me that there are a few players that are on the radar of the national selection panel. Which players will the panel look to next outside of the 14-man squad for this match?

JOE BURNS
Brisbane Heat coach Dan Vettori believes Burns has the best technique of any batsman in the Sheffield Shield. What Burns needs is Shield hundreds. Just three 50s this season doesn’t cut it. If the Test openers fail, then they could easily look towards Joe, but selectors want to see consistent big hundreds from him. His record against spin is poor. Maybe a lunch or two with Matt Hayden might help his preparation.

MATT RENSHAW
Just hit 345 in an A-grade game. Sadly, Matt has not backed up a decent Shield season from last year as he has just scored 158 Shield runs at 19 this season.After a recent successful County stint, I feel Renshaw is trying to be too aggressive. The extra bounce in Australia is causing havoc as his technique still needs an overhaul. Matt needs to ask himself some serious questions about his game. I feel Renshaw’s technique needs to be modified if he wants consistent success at the Test level, particularly on his bat planes and his slice driving. I also do not like the position he gets himself into when the ball is being released.

JASON SANGA
Long regarded as our next best thing. But a meagre 230 runs at 28 this season won’t get you picked for any national team. Jason seems to be struggling with footwork and is not getting back or forward and misjudging length this year. Sanga needs to look at other areas to score other than third man and is struggling when bowlers bowl straight to him.

WILL PUCOVSKI
Far and away the best young batsman in Shield cricket and has hit the ground running whenever he is given the opportunity. Sadly, Will has had some personal problems recently, but his numbers are outstanding with 466 runs at an average of 116 in the past two Shield seasons. When Will is ready, look out! Quality player.

MARCUS LABUSCHAGNE
Marcus has had a taste of the big time and has been overlooked. Marcus showed some promise in the UAE, but has had a poor start to the season with just 155 runs. His defensive structures need work as well as some game awareness – knowing when to attack and when to defend. His technique is a bit different, but that doesn’t faze me. Marcus certainly has promise when you add his leg-spinning options, but I feel he is a couple of years away.

JAMES PATTINSON
Good to see Jimmy back and close to top pace. If Pattinson makes it back into this Australian Test team it will be as a bowling all-rounder and it also will depend on Tim Paine's form. If Paine can bat at six, Pattinson is a perfect fit for the bowling all-rounder job at seven. Could you imagine a bowling line-up of Mitch Starc, Josh Hazlewood, Pat Cummins, Nathan Lyon and Pattinson? I would pick him for the UK tour next year. 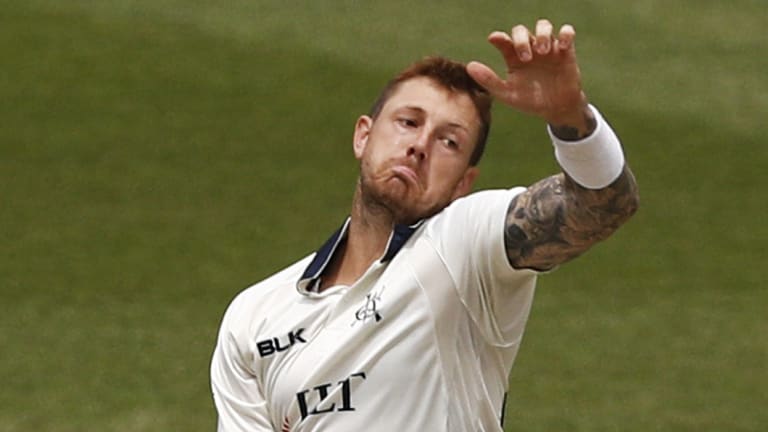 All-round option: James Pattinson is getting close to top pace.Credit:AAP

CHADD SAYERS
People don't like Chadd for his lack of speed. Many wise pundits should take note of the performance by Pakistani medium-pacer Mohammad Abbas, who killed off the Australians with his 130km/h, reverse-swinging deliveries. At 130km/h you must swing the ball both ways and that’s why I would look at Chadd as a smoky for the UK tour. He swings the ball both ways and knows where it is going. Terry Alderman bowled the same pace and performed amazingly well in 1981 and 1989. Sayers' biggest problem is Peter Siddle and Dan Worrall are ahead of him in the popularity stakes.

SCOTT BOLAND
Scotty has impressed everyone over the past two seasons with 68 wickets on mostly flat MCG pitches. Big hearted, Boland hits the deck hard and is seriously fit. Boland loves bowling to left-handers and can reverse swing it. When the ball gets old, Boland can swing it away from right-handers, which is very difficult and rare. He cannot be ignored for too long.

JYE RICHARDSON
This 22-year-old kid is fast gaining a reputation with his quality air speed and his ability to swing the ball late. Some people even say he reminds them of a young Terry Alderman, who did bowl quick before his altercation with a fan, which dislocated his shoulder, and he never touched the 140km/h again. Selectors love seeing a 22-year-old picking up eight-wicket hauls.

Then there are some of the players tried and seemingly discarded over the past few years? The NSP may take another look at these players:

MATT WADE
If Paine has a poor summer then why not look at Wade again? Matty’s numbers batting at six are very good. Since the start of last season, Wade has made more than 1000 runs in Shield cricket. If he wants the NSP to look seriously at him as a batsman, though, he will need to bat higher than six. If Paine’s form fails, Wade is the obvious choice to come back in.

JOE MENNIE
His record over the past two shield seasons should not be ignored but for some reason it is. Maybe he needs more five-wicket hauls. He has only three in 131 innings, along with 14 four-wicket bags. Many players rate Joe but Boland is ahead of him.

JACKSON BIRD
Has bowled well over the past two seasons taking 60 wickets. If given another go, Bird's style of bowling would be suited to UK, New Zealand and South African conditions. The major criticism of Bird is his lack of pace for flat Test decks and and lack of offensive options such as reverse swing.

FAWAD AHMED
Australian selectors are no doubt getting impatient with the form of leg-spinners in Australia. Fawad is still the best leg-spinner in the country by a mile. My sources tell me he is seriously being looked at for Australian one-day and Twenty20 honours again and rightly so. The problem is, Fawad is considering retirement to chase the almighty T20 dollar. So both parties need to sort out where they stand – and quickly.