Atlanta: Super Bowl veteran Tom Brady knows positive signs when they appear and the superstar quarterback says he already loves what he sees from his New England Patriots.

It started on Monday night, when tight end Rob Gronkowski broke into spontaneous dance moves during a press event. Brady said Gronkowski's gyrations should give everyone associated with the Patriots "a good feeling." 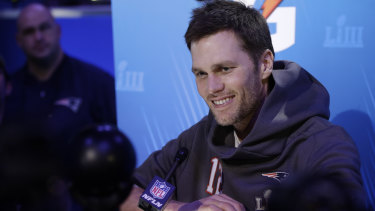 Old head on old shoulders: Tom Brady says he is sharing his experience of eight previous Super Bowls with the younger members of the squad.Credit:AP

"I was standing right next to him and he was having a good time, which tells me a lot of good things," Brady said. "It means he's feeling good, and he's excited. I think we should all be happy about that."

The next sign Brady needs to see: execution at training.

"Having a good practice gives you confidence – all of those things are going come up on Sunday," he said.

Brady is playing his ninth Super Bowl on Sunday against the Los Angeles Rams, and says he is sharing his experience with the younger members of the squad.

"It's a long game, a lot of timeouts, a lot of breaks," Brady said, adding he will encourage players to spend Saturday searching out rest.

Meanwhile, an official at the Mercedez-Benz Stadium in Atlanta says the stadium's retractable roof is expected to be open when the Patriots meet the Rams.

"It's warming up, which is good, we just have to keep the rain away," said Scott Jenkins, the stadium's general manager.

Rain and cold weather early in the week are expected to give way to drier conditions by game time, allowing the 70,000 fans in attendance to experience the game under partly cloudy skies.