Alicia Molik will never forget the day more than a decade ago that a friend suggested she take a look at a girl playing in the 12s-and-under national junior event at Glen Iris in Melbourne.

In 2005, Molik had beaten Sam Stosur in the baking heat to be the first Australian woman to claim the Sydney International women's singles title since 1980, but two years and a serious inner-ear infection later she was in the middle of a difficult comeback attempt.

She went along to the junior titles at her friend's urging. It was the day she first encountered Ashleigh Barty. 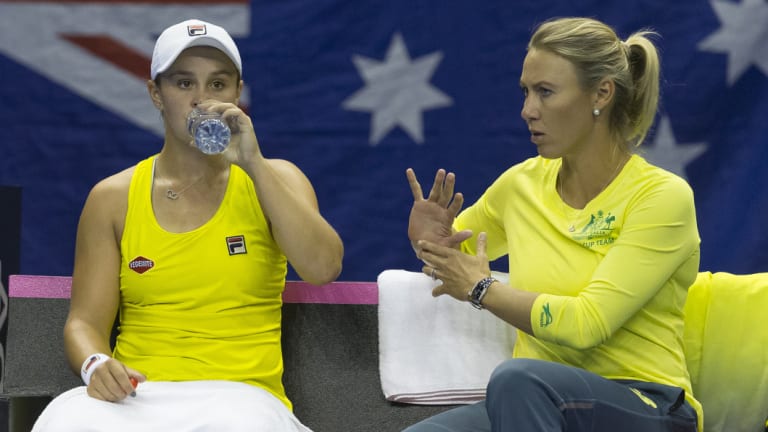 A decade later: Ash Barty, left, and Alicia Molik are together again as player and captain in the Fed CupCredit:AAP

"I think she might have been 10 or 11 when I watched her first and she had great feel and touch back then," Molik recalls. "She could do everything at the age of 11, basically. Maybe not as hard, but she could drop-shot, she had a great slice backhand. She is now the adult version of that."

It would be another five years before the pair got to know each other. Barty rose through the junior ranks and represented Australia in the Fed Cup at the age of 15, a "pretty remarkable" achievement for any player. But as Molik put it at the Sydney International: "She's always been ahead of her time."

And humble. Molik says it's Barty's greatest asset on the ruthless and gruelling WTA circuit.

"I see it on court, I see it around the events, Ash carries herself with dignity whether it's on court or in her attitude to employees at tournaments, or her coach, or those around her," Molik says. "She has a very respectful nature and that translates to the court.

"That's why I think she's a real fan favourite because everyone feels like she's the girl next door, because she really is." 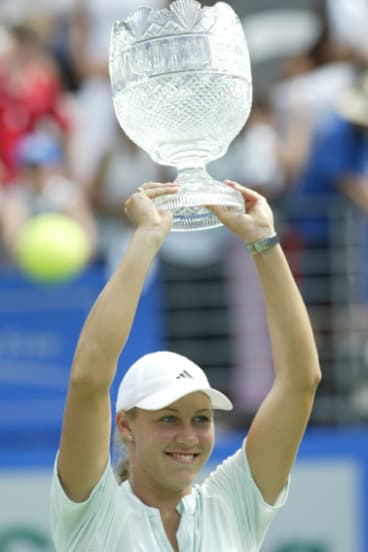 Triumph: Molik celebrates after beating Samantha Stosur in the final of the 2005 Sydney International. Credit:Simon Alekna

That may be true, but there is steel there, too.  On the court, as she resets between games, and off it, when she makes the pronouncement “I fear no one” sound like a reasonable statement of fact. The same phrase would have taken on bombastic proportions had it come from the mouth of a Nick Kyrgios or Bernard Tomic.

Molik sat courtside as Barty dropped the first set against the ninth-ranked Bertens on Friday afternoon. It was her third straight match against a higher-ranked opponent, including world No.1 Simona Halep and Elise Mertens, but Molik knew Barty could recover.

"I was impressed with the match against Bertens because all three sets featured incredibly high-level tennis and Ash stuck to her guns physically, mentally, and was able to go the distance," Molik said.

"She's had one of the tough draws. That's a huge pat on the back she can give herself because the calibre of players that she's had to get through to get to this point in time is no easy feat.

"If she can maintain the way she's played … she'll definitely trouble the entire draw in Melbourne [at the Australian Open]."

The summer of 2005 was good to Molik. She rode a wave of "invincibility" to win in Sydney and felt so good she was surprised to be pulled up by American Lindsay Davenport in the quarters at the Australian Open. The run saw her reach a rankings high of eighth in the world. 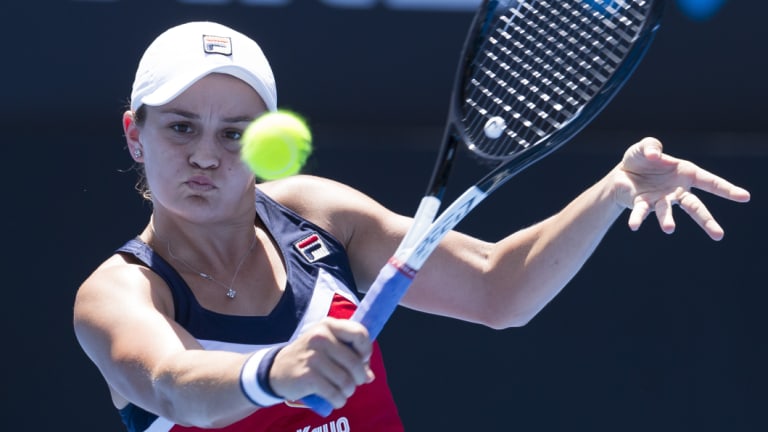 After beating a host of players ranked higher than her in Sydney, Barty is on a similar trajectory. Molik believes it could be just the beginning for the no-nonsense girl from Ipswich.

"It's always such a pleasure to watch Ash," she says. "In every single match she plays there's always a few 'wow' factor points, if not many of them.

"It's a style of tennis that we don't see much in the women's game, so it's exciting for me to watch. There's so many points I smile after [watching] because she has a very special gift with the way that she works the ball," Molik said.

"She still has a lot ahead of her, but she's come so far so quickly. It was only a couple of years ago that she took a year out of the game and since that period of time her coach, Craig Tyzzer, is doing the most unbelievable job. They have developed such a healthy coach-pupil relationship and we're seeing a lot of that now." 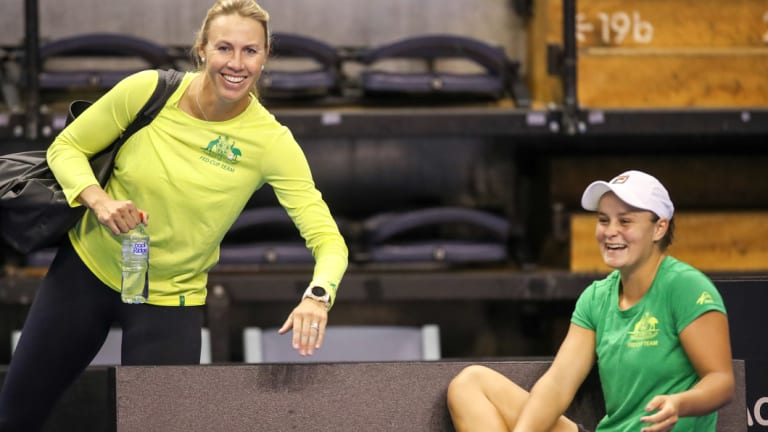 Much has been made of Barty's cricket "sabbatical" with Molik commenting this week that it was a timely push of the reset button for a talented but burnt-out young player.

Her return – after a season with the Brisbane Heat in the Women's Big Bash League – has been an unqualified success.

Molik believes Barty's combination of humility, steel and intelligence will be her best weapons in the fight to better her third-round exits from the past two Australian Opens.

"She's still very young in tennis terms," Molik says. "We're seeing players in their late 20s be successful in grand slams and it just goes to show what is ahead of her.

"She's a competitor. But she's not just a competitor, she's also an incredibly astute student of the game. She's very match- and opponent-aware. A lot of tennis players rely on information that they're fed and Ash has the ability to recognise on the spot and she has the skills to adjust in the moment as well. That's what pretty special athletes have."