Winx will be denied her rightful crown as the best horse in the world when the award is announced this week.

The World's Best Racehorse award is decided by the single best performance for the year, rather than collective work, so is open to interpretation from the international panel that rates races. 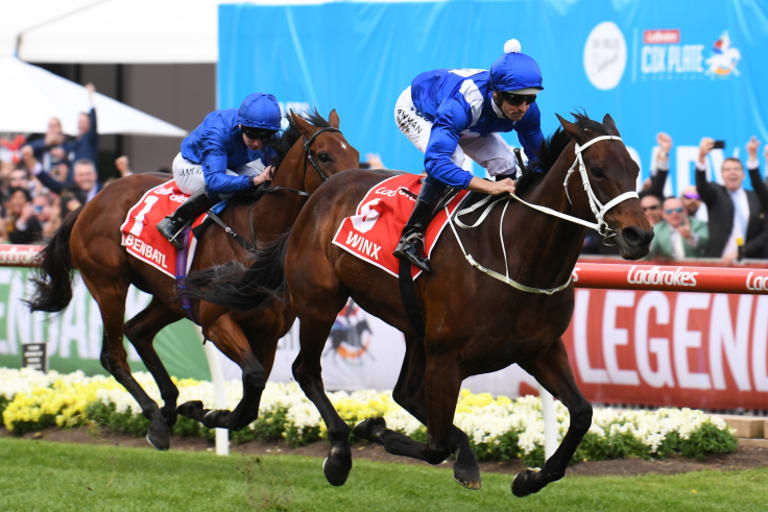 Simply the best: Winx cruises away from Benbatl to take her fourth Cox Plate in October.Credit:AAP

Winx and Cracksman are rated at 130 from their wins in the Queen Elizabeth Stakes and Champion Stakes respectively in 2018 and in truth both numbers are questionable.

Winx’s Cox Plate win was stronger than her Queen Elizabeth triumph, when she beat Gailo Chop and Happy Clapper at Randwick in April.

Her fourth victory at Moonee Valley had the European form behind it from Benbatl and Avilius, which was fourth. Both have form lines back to Cracksman while Humidor backed up from his second in 2017 to run third.

The margin was only two lengths to Benbatl, which opted to target the Cox Plate rather than Europe in 2018, but it was comprehensive with gaps to the rest.

Cracksman was rated 125 before the Champion Stakes, which he won by six lengths. But looking at those behind him reveals a group 2 winner Crystal Ocean, which is rated 126 after seconds behind Poet’s Word and Enable, the strongest of European form, and a Czech seven-year-old having his first group 1 run in Subway Dancer.

The Europeans question what Winx beats, but imagine what they would say if her best performance was beating two non group 1 winners. Yet Cracksman's rating went up five points or 2.5 kilos.

Cracksman is probably not even the best horse in the John Gosden stable, given dual Arc de Triomphe winner Enable is there, yet alone a match for Winx.

Almond Eye – the sensational filly which won the Japan Cup in record time – and Enable are horses that are mentioned by most in discussions about the best in the world. They will be rated just behind Winx and Cracksman when final rankings are revealed.

Warwick Farm trainer Richard Litt wants to give extraordinary Canterbury debut winner Castelvecchio his chance at next month’s Inglis Millennium but thinks he will be a better three-year-old.

The Dundeel colt is a half brother to Spring Champion Stakes winner Maid Of Heaven and came from a couple of lengths last at the 800m mark to charge to victory. In a big field he made up more than eight lengths with a long sustained run while avoiding traffic problems.

“We would love to aim for that Inglis race. He is a very soft colt and not overly big. However he has great constitution,” Litt said. “It was a bit of surprise, it was a very big win.

“We have paid up for it and $2 million races don’t come along too often, so I would like to have a crack.

“He won’t have too many runs as a two-year-old as we will save him to be a three-year-old because he will be better out to a mile.”

There were questions about how much the All Star Mile is actually worth when the list of 136 entries were published on Tuesday.

The supposed $5 million race is listed as being worth $4.14m on the entry list.

Racing Victoria told the Herald the missing $860,000 was due to the prizemoney only being shown down to 10th rather than 14th as will be paid for the feature at Flemington in March.

However, $500,000 of the prizemoney will go to fans – who voted in the poll for the race – as owner ambassadors, so cannot be shown in the prize pool.

The public ballot to chose 10 runners for the race starts on Monday.

English jockey Tom Marquand might have set a record with his double to close the Warwick Farm card on Wednesday.

If you took the starting price double it would have been 1500-1 as Kaecilius won at $31 followed by Another Snappy at $51.

The English style certainly suited both horses with Thompson saying Marquand got something extra out of Kaecilius, while the jockey and trainer Jarrod Austin faced questions from stewards about all-the-way winner Another Snappy.

“What are we suppose to tell our customers about that [turnaround in form]?” deputy chief steward Philip Dingwall asked after Marquand opened a big gap and held on to win on Another Snappy.

“I just went English fractions on him,” Marquand said. “He was comfortable and had something left at the end.”

Marquand is hoping to get a ride in the $2 million Inglis Millennium and has extended his stay in Sydney by week and plans to return later in the year.

Meanwhile, there will be another major addition to the strong Sydney riding ranks this week in time for the autumn carnival.